THE FREE Forum (SF) party has presented its own healthcare reform plan as an alternative to the Health Ministry's reform package, arguing that the ministry's take was too radical.
On August 17, SF Chairwoman Zuzana Martináková told journalists that the party's proposal was to be taken as an alternative by MPs who will discuss the ministry's proposals in their second reading this September. 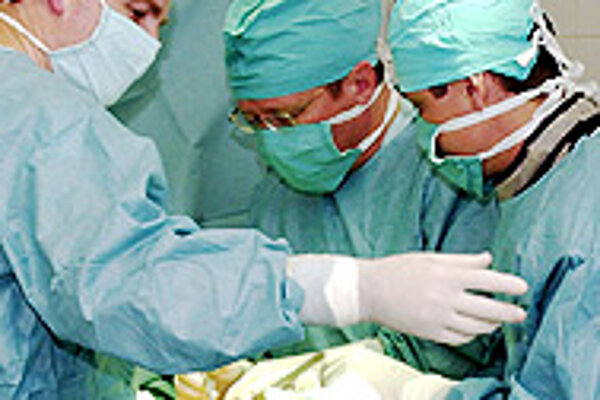 Font size:A-|A+0
THE FREE Forum (SF) party has presented its own healthcare reform plan as an alternative to the Health Ministry's reform package, arguing that the ministry's take was too radical.

On August 17, SF Chairwoman Zuzana Martináková told journalists that the party's proposal was to be taken as an alternative by MPs who will discuss the ministry's proposals in their second reading this September.

According to Martináková, her party will support the ministry's draft reform only if its philosophy is changed during the parliamentary discussion. Otherwise, the SF will oppose the passing of the reform and will submit its own draft.

The ministry's reform inadequately specifies what constitutes healthcare service and it also opposes the transformation of health insurance firms into joint stock companies, both of which the SF would like to see changed.

Martináková also thinks that the Health Ministry's draft does not deal sufficiently with the problems of the neediest groups of patients.

"We are also submitting this proposal in order for MPs not to feel under pressure to approve the Health Ministry's plan simply because it is the only one that exists and that the health sector will collapse if they don't approve it," Martináková said.

The SF has prepared three new laws and one amendment to an existing law on medical drugs.

The drafts include laws on healthcare service and its providers, insurance companies, and supervision of health service provision.

However, the SF is not united on its own proposal.

"The [SF] proposal involves [healthcare] professional chambers that are too strong," Šimko told the SITA news agency, adding that, "as a Christian I cannot identify with the clauses regarding bioresearch and medical ethics."

According to Šimko, the SF should concentrate on submitting proposals to change the existing Health Ministry's reform plan rather than proposing its own.

The reform, drafted by the Health Ministry and widely promoted by Health Minister Rudolf Zajac and his team, is one of the most awaited points on the agenda of the September session of the Slovak parliament.

It consists of six laws to be discussed in the second reading, having passed their first reading before the summer recess. The laws include a law on insurance companies that aims to transform the firms into joint stock companies. A law on healthcare insurance introduces two types of insurance - obligatory and voluntary.

The package also includes a law on the provision of healthcare and a law on the scope of healthcare that defines the services that are provided under obligatory public health insurance and lists diagnoses for which patients will have to pay for treatment.

Finally, there is a law that introduces a new system of healthcare ambulance services in order to fit them in with the other parts of the system.

The Health Ministry's reform is designed under the motto "Health reform - reform for the citizen" and lists 14 basic rights of patients that the new laws pledge to respect.

The World Bank has supported the Slovak health reform with a loan worth Sk2.8 million (€69.4 million) that the country will draw from until 2007, provided that the sector is reformed as proposed by the ministry. Of that money, around Sk2.3 billion (€57 million) will go to modernisation and the remaining sum will be used for technical assistance.

Even the new proposed state budget for 2005 counts on the approval of the Health Ministry's reform.

According to the draft budget prepared by the Finance Ministry, the healthcare sector's income next year is projected at Sk73.4 billion (€1.8 billion), of which Sk2.8 billion should come from the repayment of loans that were provided to health insurance companies

Provided that the reform is approved, the health sector should see a decrease in state financing and a rise in financing through health insurance providers.

It remains unclear, however, whether the ministry's health reform will be passed in parliament. Apart from professional organisations active in healthcare, MPs, including coalition members, have also prepared hundreds of changes and recommendations that they want to incorporate into the ministry's drafts.

The Slovak chamber of doctors opposes the reform, arguing that it goes against the constitution, and opposition parties have also protested some of the proposed changes.

Tibor Bastrnák from the ruling Hungarian Coalition Party recently told the SME daily, however, that provided his party's proposals are accepted, it would support Zajac's reform.

Regarding the SF's proposals, Health Ministry Spokesman Mário Mikloši said that the "proposed plan is not an alternative to the health reform but rather a dissection of it," and added that it was only logical that Šimko, who is "an experienced legislator" according to the ministry, rejected the plan.

Mikloši would not comment on whether the ministry hoped its six reform laws would succeed. However, he told The Slovak Spectator that, "the parliamentary discussion will decide everything."