How to feel Slovak life

THE relaxed and welcoming atmosphere is apparent as soon as you step in to the Hotel Sojka in Slovakia's mountainous Liptov region.
Instead of a regular reception desk a sign points you to the restaurant where co-owners Gerdi Vanfleteren and his Slovak wife Gabriela are on hand to greet guests with a smile. 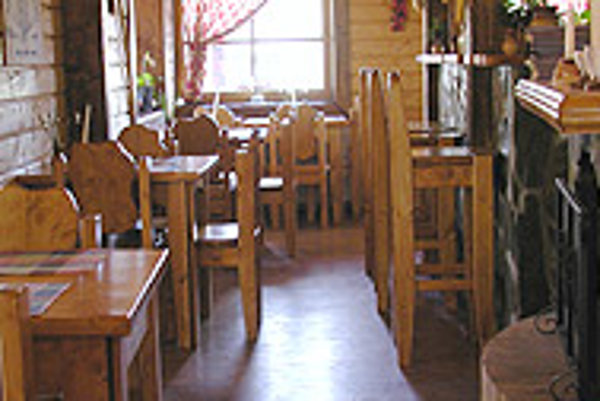 THE relaxed and welcoming atmosphere is apparent as soon as you step in to the Hotel Sojka in Slovakia's mountainous Liptov region.

Instead of a regular reception desk a sign points you to the restaurant where co-owners Gerdi Vanfleteren and his Slovak wife Gabriela are on hand to greet guests with a smile.

"The rule says we have to have a reception desk but to us it was too official. So, we have one but use it as a sort of store room," says Vanfleteren, a Belgian who came to Slovakia as a bank manager and ended up running this small holiday complex in the tiny village of Malatíny.

The young entrepreneurs decided to leave their jobs at the Dexia bank in Žilina and build the small hotel complex and swimming pool a year and a half ago.

They aim to attract guests from all over Europe, though naturally they concentrated first on attracting Flemish to this picturesque, yet little-known part of Slovakia stretching between the High and Low Tatras.

The Sojka hotel chalets are built in lob cabin style with long sloping roofs. The interiors exude the sweet smell of wood and are furnished by local craftsmen.

The traditional architecture and decor enhances the family atmosphere the Vanfleterens are aiming for. They are zealous to communicate the beauty of Slovakia to their guests. Most can expect service in their native language, creating a real home-from-home atmosphere.

"Slovakia is a beautiful country with a great range of natural surroundings, history and culture. That means that there are lots of opportunities in tourism. Yes, there are already a lot of hotels, but they forget to smile at the customers. We saw a gap," says Vanfleteren, explaining what led him and his wife to quit their banking jobs and strike out on this exciting venture.

They knew from the start that they wanted to cater for mainly foreigners in their hotel, especially Belgians, and they had a big advantage.

"The problem here is the language," says Vanfleteren. "When foreigners come to this country, they have a hard time finding information in their languages. Everybody, including people in the service sector, is good in three languages - Slovak, Slovak, and Slovak," he laughs but adds seriously it is unfamiliarity with the language that stops Flemish people from coming here. "They still think it's like a jungle here, where they steal cars and do other bad things.

"We want to change this thinking, to explain what it's really like in Slovakia. Through our hotel, where visitors get traditional Slovak style brought to them in Flemish, we also promote the Liptov region as well as the whole country."

Every morning, Gerdi and Gabriela Vanfleteren serve guests breakfast and chat to them about the weather, asking about each family's plans for the day.

The guests can go hiking, cycling and skiing in the surrounding mountains. Or they can simply stay at the hotel, relax with a book on the hotel terrace, take a sauna or take a dip in the swimming pool.

The couple have personally tested all the available activities in the area so they can give first-hand advice and assistance on each and every one of them.

In winter the Liptov region gets a lot of snow, so many guests go for a local attraction, horse sledding. Throughout the year, they join the locals and celebrate various folk traditions - Easter, Three Kings, or Christmas - that are still very much alive in the Liptov. Or they can simply join the locals in the pub.

"Last year we celebrated Christmas in a Christian, family style. Gerdi was the father of the family. He marked everybody's forehead with a cross and told stories and legends about Slovak customs. When the locals started to gather for midnight mass, many of our guests decided to join them. Even though they understood nothing said in the church, they enjoyed the spirit," Gabriela recalls.

The 35-year-old Vanfleteren came to Slovakia in May 2001. Gabriela was working at the same bank, helping him to market newly launched bank products. Against every rule they went for a coffee. They started seeing each other and soon realized they were not leading the life they wanted to. They decided to follow their dreams.

"I asked to quit my 3-year contract at Dexia and we started looking for land to buy," Vanfleteren says. "We knew it would be in Liptov. It's a very central region, you can basically reach the whole country from there and there's a lot of variety - mountains, hot springs, history and traditions.

"Then we saw an advertisement about this piece of land in Malatíny. We came, looked around and everything was just bad, bad, bad. Anyhow, we decided to buy it. It was risky but the idea of what to do with it slowly started to ripen in our minds."

They asked for a loan, hired an architect, and waited 15 months for building permission. During that time they explored the surroundings, read up on tourism and studied hotel management. They found out what Belgian tourists particularly are looking for when they go on holiday. They studied the Liptov cuisine and learned how to cook the recipes they researched from the locals. Now they serve specialities such as Liptovské droby s kyslou kapustou (Liptov potato dough sausages with bacon and sauerkraut), to their eager guests.

The hotel opened in March 2004, just before Slovakia joined the European Union. The Hotel Sojka's website is in Slovak, Flemish and English and is often the first point of contact for many foreigners looking for information on holidays in Slovakia. The word has spread and last summer the whole complex was fully booked.

"July 2005 is already booked and other months are being filled continuously," Vanfleteren says. He does not want to expand because he does not want the hotel to lose its family atmosphere.

What he does want is the hotel to become more international. Apart from Flemish people, Russians, Swedes, Germans, Poles and of course Slovaks have all stayed at the Sojka.

Although the Sojka teaches its international guests about Slovak life and customs, a little bit of the spirit of Belgium has been "smuggled" in - tasty Belgian beer. Some locals come to visit just because of it. Others are lured by exciting events such as ballooning competitions or when members of the Harley Davidson bikers club stayed there.

"The Sojka has brought life to the village," says Peter Pethö, the mayor of Malatíny, with its population of 160.

The rise in tourism is helping employment in the village and getting it noticed. "The hotel makes us visible, people get to know about Malatíny," Mayor Pethö says.

Hiking to castles and exploring caves is what most hotels and agencies often offer to visitors of Slovakia. The Sojka's philosophy works differently.

"We want the tourists to feel the actual life," says the always active and easy-going Vanfleteren, who finds Slovaks similar to the Belgians.

"They are a bit closed, distanced, but once they open their heart - it's without end."