DISCIPLINE, smart tactics and a strong defense saw Slovakia through to the playoff round of World Cup qualifiers on October 12 - the furthest the country's national football team has advanced in top-level competition in 12 years of independence. 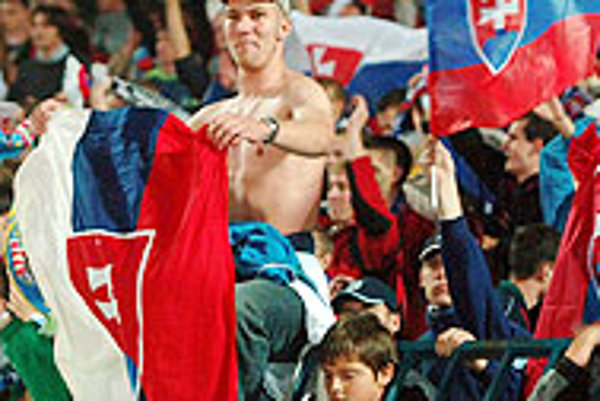 Font size:A-|A+0
DISCIPLINE, smart tactics and a strong defense saw Slovakia through to the playoff round of World Cup qualifiers on October 12 - the furthest the country's national football team has advanced in top-level competition in 12 years of independence.

Playing at home against Russia in the final and deciding game of the regular qualifying round for next year's football championships in Germany, Slovakia spent most of the time repulsing Russian attacks in its own half, but allowed their opponents only one dangerous scoring opportunity all game.

At the other end of the field, Slovakia produced at least four solid chances, and although failing to convert either a penalty-area blast by Szilard Németh in the 10th minute or a breakaway by Filip Hološka in the 85th, the Slovaks were hailed at the end of the match by Russian captain Alexej Smertin as having been the better team.

"We can leave with our heads up, we did what we could," he said. "Slovakia's offensive power isn't exactly incandescent, but the foundation of football today is a rock-steady defense. And Slovakia certainly has that."

"The Slovaks played a great tactical game, and we just couldn't find the key to their defense," added Russian coach Jurij Siomin. "It was a very tough game."

Slovakia, which finished second in Group 3 behind Portugal, needed only a tie against Russia to advance to the playoffs on goal differential. However, they avoided the tactical mistake of playing for a draw, and seemed to surprise the Russians with their counterattacks and their willingness to pursue offensive chances.

The Slovaks also shut down the midfield with tight marking, and played a strong positional game that held up even under great pressure late in the match.

"It was a nerve-wracking game, and I kept looking at my watch and wondering when the final whistle would sound," said striker Róbert Vittek. "But we were the better team, we chose the right strategy, and we used the chance that was given to us."

As The Slovak Spectator went to press, the national side was due to find out in a 12:00 CET draw on October 14 who their playoff opponents for a home-and-home series would be: The possibilities were Turkey, Spain and the Czech Republic.

The matches will be played on November 12 and 16.

Defenseman Roman Kratochvíl, who plays professionally for Turkish side Denizlispor, said he hoped Slovakia would draw Turkey, because "they're an opponent that gives us a certain chance" to win.

Slovakia has never beaten Turkey, ranked 12th in the world by the FIFA international football federation, in top-level play. In the 2004 European Championships they were beaten 1-0 by Turkey at home and 3-0 away, while in the 2002 World Cup qualifiers they managed a 1-1 draw in Istanbul but were defeated 1-0 in Bratislava.

However, of the six teams in the playoff round (including the Czech Republic, Spain, Switzerland and Norway), Turkey has the worst record in qualification play, and the daily Šport quoted three other Slovak players as saying they preferred to face Turkey next.

"We've got unfinished business with them, and I think we have a chance to pay them back," said Slovak captain Miroslav Karhan.

Slovakia's last World Cup qualification meeting with the Czech Republic was in 1997. The Slovaks won 2-1 in Bratislava but crumbled 0-3 in Prague to both the psychological and real challenges of playing their ertswhile compatriots in the former Czechoslovakia. The Czech Republic is ranked third in the world by FIFA, while Slovakia currently stands 45th.

Nor is Slovakia's record against eighth-ranked Spain grounds for optimism. In the 1998 World Cup qualifiers, Slovakia was beaten 4-1 away and 2-1 at home by the Spanish, eventual winners of their group.

Coach Dušan Galis, the only Slovak national team trainer to take his charges to the World Cup playoffs so far, said he believed Slovakia would advance to the finals, but for the moment preferred to savor his team's success against Russia.

Galis had been under tremendous pressure before the match, with the tone of the media's coverage suggesting that failure to advance would amount to a betrayal of "generations of Slovak players, coaches, functionaries and fans," according to the daily SME.

"DON'T DISAPPOINT THE NATION" thundered Šport in front page block capitals on the day of the game.

"It was dramatic right to the end, but the most difficult part of all was the responsibility I felt to the Slovak fans," admitted Galis after the match. "Right now, I'm not thinking of the playoffs at all.