Successful and entertaining departure for CowParade

AN AUCTION of the CowParade's best cow statues raised over Sk 2 million (€50,000), making it the most successful art-charity auction in Slovak history. The money will go to support art-therapy educational projects for severely disabled children. 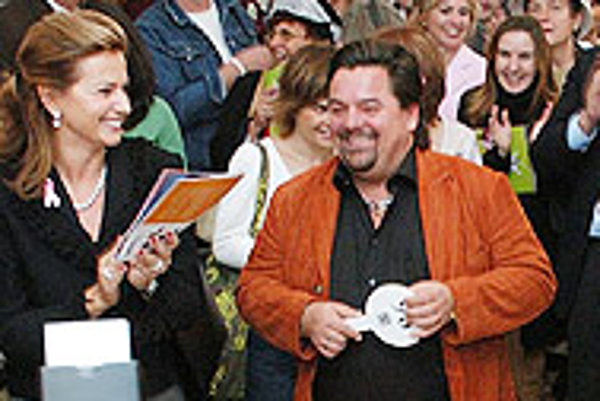 Font size:A-|A+0
AN AUCTION of the CowParade's best cow statues raised over Sk 2 million (€50,000), making it the most successful art-charity auction in Slovak history. The money will go to support art-therapy educational projects for severely disabled children.

"It's definitely the most successful auction during my tenure as an auctioneer," said the experienced crier Nina Gažovičová from Bratislava's SOGA auction house, which ran the sale. "The buyers were very generous and willing to help."

The 21 cow statues on sale were the work of well-known politicians and celebrities, who created them in cooperation with artists. The auction house started each statue at Sk40,000 (€1,000), and bids first began to increase with the seventh cow, which was made to resemble famous opera singer Peter Dvorský. His statue, entitled Ta-krava-ta, had featured a rendition of the singer's famed tie collection with the help of the artistic Bidelnica couple, and sold for Sk200,000 (€5,000).

Bidding on a cow made to resemble the former economy minister, Pavol Rusko, also entertained the crowd, and ended at the same price as Dvorský's. Ironically, the cow, entitled Rusuľa, was bought by Rusko's arch-rival, Marián Kočner, who, in 1998, tried to take over Rusko's media child, TV Markíza, and bought up the land for automobile giant KIA in an effort to impede Rusko's investment plan. According to the daily SME, Kočner's exploit was met with laughter, whistling, and some foot stomping.

It was a cow statue entitled The Third Eye, though, that raised the most, selling in the end for Sk210,000 (€5,400). It was the joint effort of Speaker of Parliament Pavol Hrušovský and artist Štefan Porubän.

Politician Monika Beňová bought two statues: the one she had worked on with media magnate Fedor Flašík, which parodied the reality show phenomenon, and the Čachtická cow by filmmaker Juraj Jakubisko.

Katarína Gáspárová's well-known Inspiration cow statue, which was suspended upside-down on Hviezdoslavovo Square, was purchased by Juraj Droba for telecommunication operator T-Mobile, the largest supporter of the entire CowParade project.

Though the result could not be compared to CowParade auction in Prague last year, it definitely beat the recent one in Bucharest. Other cities in the region, such as Warsaw, are still waiting for their auction results.

"The auction exceeded all our expectations," said Filip Vagač, the director of CowParade Slovakia. "The generated money will help to support many more activities than we originally planned."