ALTHOUGH the New Year’s address of President Ivan Gašparovič was not exceptional in any way – according to observers of the Slovak political scene – Gašparovič found another way to make a bit of a stir at the beginning of the new year. 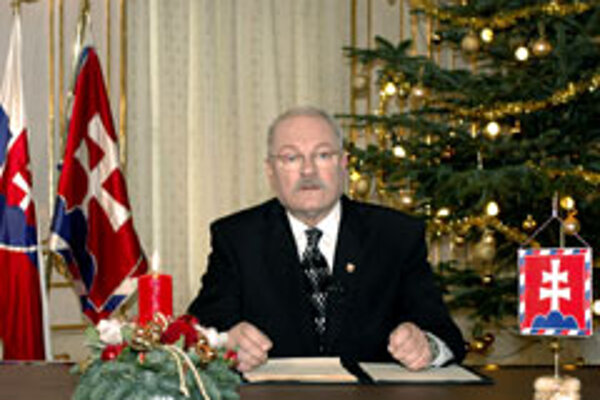 Slovak President Ivan Gašparovič stirred up the slow political start of the year when he suggested that the government and state institutions should have their own media outlet. (Source: ČTK)
Font size:A-|A+

ALTHOUGH the New Year’s address of President Ivan Gašparovič was not exceptional in any way – according to observers of the Slovak political scene – Gašparovič found another way to make a bit of a stir at the beginning of the new year.

A few days after his New Year’s speech, the president echoed Prime Minister Robert Fico’s critical stance on the Slovak media and suggested parliament form its own media outlet.

Pavol Frešo, an MP with the opposition Slovak Democratic and Christian Union (SDKÚ), said a lot of things were missing from the presidential speech: “The word ‘democracy,’ the word ‘freedom,’ and the expression ‘civic society,’” he told the STV public broadcaster on January 1. “All three of these words are now under a lot of pressure from the current ruling coalition. And that is why I was so disturbed that such a moral authority did not use them.”

The deputy speaker of parliament, Viliam Veteška of the Movement for a Democratic Slovakia (HZDS), was generous in his praise.

“They all call for peace, calm, citizens’ safety, and the social improvement of life,” he said. “All of this also resonated in our president’s address.”

But political analysts, at least, agreed that the address was uninteresting.

“This year’s address was totally empty,” political scientist Miroslav Kusý told The Slovak Spectator. “Well, empty with only his typical, markedly national elements. Nation, family, nation. It was an address meant to please everyone and annoy no one.”

Political analyst Peter Horváth also found the president’s address a little on the dull side.

“It is an address that will not be remembered by anyone in Slovakia 48 hours later,” Horváth told Aktualne.sk on January 1, 2008.

But a few days later, on January 5, Gašparovič did something more memorable during the Saturday Dialogues talk show on the public Slovak Radio: he suggested the government and the parliament form their own media.

“They should have their own media, which would present the government’s decisions and positions, parliament’s positions, and the positions and opinions of those who manage the state in general, so that the state bodies are not in a position where they cannot express themselves and react to half-truths sometimes,” Gašparovič was quoted.

This media would “search for a way for the cabinet to express themselves freely without someone re-evaluating their statements,” he told the SRo.

Kusý said any attempt to do that would be a direct route to hell. If Gašparovič’s plan was to create a specific media service that would serve the government, it would not have a chance to survive on a free market, as only a few people would buy it.

“(The government media) would have to be supported . . . and be given an advantage compared to the free media,” he said. “And of course, the free and independent media would be beaten in the competition in the way that Hugo Chavez, for example, does it.”

Political analyst Samuel Abrahám told The Slovak Spectator that he could only imagine the government getting a kind of internal bulletin rather than its own medium.

“I ask quite seriously – whose money would pay for this governmental media to be published?” he said. “Smer, HZDS and the Slovak National Party (SNS) cannot have their own media financed by taxpayers.

“Why should taxpayers pay for a media outlet that spreads cabinet or parliamentary propaganda? Not to mention the fact that when the parliament is concerned, the situation is quite complicated, as it is pluralist. So again, in the media, only the parliamentary majority would be represented.”

“Politicians’ interventions are unacceptable, but this problem concerns all of Central Europe – from Romania, to Hungary, through Ukraine, and Slovakia to the Czech Republic,” he said on Slovak Radio on January 7. “You have a whole generation of politicians who were used to what they perceive as their right to intervene in the media.”

Renate Schroeder, the head of the European section of the non-governmental International Federation of Journalists (IFJ), says attempts to control the media are dangerous. They also contradict the European Treaty on Human Rights and the Protection of Freedoms.

“It is shocking to hear about the efforts to control and take over power over the public media,” he told Slovak Radio on January 7. “We had the impression that back in the 1990s, the difficult transformation from the state-controlled media was well-managed. Now when we see that in your country, and also in Slovenia, there is an effort to re-install the state-controlled media, we consider it dangerous and absolutely contradictory to European tradition.”

Gašparovič’s suggestion echoed a statement Fico – well-known for his animosity towards the media – told the press a few weeks earlier.

Fico spoke in favour of the idea of electing people close to the ruling coalition to the Television and Radio Council, two bodies that oversee the public media.

“Of course we are interested – and quite understandably – in having people elected there who would represent our opinions,” Fico told media on December 18.

“The Office of the Government of the Slovak Republic has no intention to sit idly by and watch the lies and hatred targeted at a legitimately-elected government that are spread by some media,” she told the TA3 television news channel on January 3.

The political analyst Kusý thinks that Gašparovič had re-election in mind when he followed Fico’s lead and declared himself for the creation of governmental media. The president is trying to appeal to Smer voters, and thus to become the party’s presidential nominee in next year’s election, Kusý said.

“Gašparovič is playing the card where he needs Fico’s support,” he told The Slovak Spectator. “He is already playing into Fico’s hands with respect to the next presidential election.”

The chair of the Slovak Syndicate of Journalists (SSN), Zuzana Krútka, voiced concern that the public media could turn into governmental media with the government’s intervention. But she doesn’t think that kind of system would stand up.

“They cannot be governmental media, as it follows from the definition of the public media that they should serve the citizens,” she told the STV.

But according to Kusý, the threat of creating a governmental media system is quite realistic.

“There is a whole series of steps showing that they really mean it when they intend to control the media, to create media controlled by the government,” he said.

Abrahám, on the other hand, said that the prime minister and president won’t likely act on their tough statements as long Fico and his Smer party are still popular.

“I fear what Fico will do when he is not popular any more,” Abrahám said. “Let’s say in a year or two, when his popularity starts declining. . . . Then troubles will emerge. Now, this is just vaudeville.”