How iron is the new eastern curtain?

SEČOVCE: Above the village of Petrovce, Slovakia and Ukraine are separated only by a narrow, treeless avenue in a thick and silent forest. From here to the ridges of the Poloniny mountains in the north, this “green border” crosses 60 kilometres of some of the roughest terrain on Europe’s new eastern frontier. 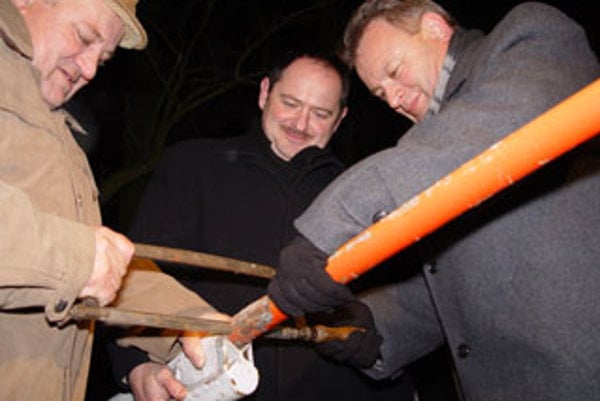 Slovak and Hungarian officials symbolically cutting the barrier between their countries after Slovakias's entry into the Schengen zone. (Source: SITA)
Font size:A-|A+

SEČOVCE: Above the village of Petrovce, Slovakia and Ukraine are separated only by a narrow, treeless avenue in a thick and silent forest. From here to the ridges of the Poloniny mountains in the north, this “green border” crosses 60 kilometres of some of the roughest terrain on Europe’s new eastern frontier.

So rough, in fact, that the Slovak border police find it impossible to patrol in places, even on their new snowmobiles, dirt bikes and ATVs. So rough that the fixed cameras and motion detectors in places further south have not been mounted here.

If you were an illegal migrant looking for a place to cross into the European Union’s borderless Schengen zone, this would be it.

“They hide in the woods by day and cross at night, using the lights of the village below to guide them,” says Ján Ivaniš, the head of the Petrovce border police, his breath smoking in the late December sun as we walk the Ukraine frontier. “In the winter it’s easier to track them, because they leave traces in the snow, but in the summer the forest is very thick. And the ground rises 700 metres within 13 kilometres of this point.”

And yet, as Slovakia and eight other countries joined the Schengen zone on December 21, the police were claiming success: The number of illegal migrants caught on the Slovak-Ukraine border has fallen steadily over the last five years, from almost 5,500 to 1,600. The authorities say they are now catching 90 percent of the migrants who cross the frontier illegally, and that their diligence is forcing the people-smugglers to look for new routes through Poland and Hungary.

“We catch almost all of them,” Ivaniš says, as a column of police jeeps growls by. “It may take us anywhere from 10 minutes to 24 hours after an incursion, but in the end we catch them.”

Miroslav Uchnár has led many groups of journalists through the equipment sheds of his new Sobrance border police station over the past few weeks, but his satisfaction with the unit’s high-tech gear is still impossible to miss.

He has something to say about all of it: the Mercedes G jeeps in military green; the snowmobiles, dirt bikes and ATVs; the mobile infrared truck, motion detectors and cameras; and the van whose computers are connected to the Schengen database system, allowing police to check the ID of suspicious people they pick up on the road.

He takes the reporters to the station’s control centre, where officers monitor images fed back live from more than 200 fixed cameras guarding the border south of the Vyšné Nemecké crossing.

In the complex tradeoffs between free movement and security that have been a part of absorbing the new members into the Schengen zone, this is what the rest of Europe “gets” from the deal: a commitment from countries like Slovakia to stem the flow of illegal migrants across their eastern borders.

“Compared to five years ago, we now have a very sophisticated camera system that stretches for 34.5 kilometres, with individual units placed 180 metres apart and monitoring the state border constantly,” says Uchnár. “We also have almost three times as many police as we had in 2004, and we have greatly improved our technology and equipment. Illegal migrants, and above all human traffickers, face a far greater risk of getting caught, and this is being reflected in the huge decline in the number of people we are intercepting.”

The new border surveillance technology, which has cost about Ř50 million (Sk1.7 billion), has given the police a presence that is welcomed by local residents. Every night, between 50 and 60 officers patrol the border, some on motorised foot patrol with dogs.

“Schengen is a great blessing for our municipality, because the increased police patrols have brought about a general decline in the amount of break-ins, petty theft and other misdemeanours,” says Nadežda Sirková, the mayor of the village of Ubľa, three kilometres from the EU’s new outer border. “The patrols go by constantly during the day, and we hear their snowmobiles in the hills all night long. They’re a lot better equipped than they used to be – they even have a helicopter – and the result is that we are seeing far fewer illegal migrants.”

“It’s like night and day,” agrees Ľudovít Tóth, the mayor of the village of Veľké Slemence, which has been cut in two by the Slovak-Ukraine border since the international land settlement following the Second World War assigned half of the village to each country. “In the 1990s they had maybe eight or nine police stationed here, and they patrolled on foot. Now there are 30, and they drive Mercedes.”

While police statistics and popular opinion confirm a sharp drop in the number of illegal migrants since the new technology arrived from 2005 to 2007, few believe the same success can be achieved against smugglers of cigarettes, alcohol and motor fuel.

Smuggling operations range from the petty – people sneaking in an extra bottle of booze or an extra carton of cigarettes beyond their allowance of one every seven days – to major operations employing trucks and river boats.

“Schengen will do little to change the illegal trade, because the smugglers cooperate with the customs agents, and the same people will be working the border after December 21,” says a man from the Veľké Slemence smuggling community, in a meeting arranged for The Slovak Spectator by a local contact. “The extra controls might catch a few more loads, but the money is so good that it will still be worth their while.”

Locals in the village report that gas costs Sk19 a litre in Ukraine compared to Sk40 in Slovakia; a carton of cigarettes Sk60 compared to Sk350; and a bottle of vodka Sk60 compared to Sk150. During business hours, there are rarely fewer than 200 people waiting to cross from the Slovak side of Veľké Slemence to the Ukraine side, and according to locals the wait can take up to two hours.

“I go across every week,” says Ľubo Michál, 17, adding with a cheerful grin, “but of course, everything I bring back is for my own consumption.”

According to Mayor Tóth, even those who bring in only legal amounts of cigarettes and alcohol can earn an extra Sk800 to Sk1,000 a month. “Around these parts, that’s not nothing,” he says.

“As long as there is a difference in the prices of these goods in Ukraine compared to Slovakia or the rest of the EU, (smuggling) will certainly continue,” says the shift boss of the border guards at Vyšné Nemecké, who does not provide his name because he says he is not allowed to give interviews.

As for cooperation between the police and the criminals, the shift boss says that some of his colleagues in the past were charged with aiding smuggling, but that internal controls are now strict.

“These inspection units are checking up on us constantly,” he says. “Two years ago, a few guys were fired and had criminal charges pressed against them, but they haven’t been sentenced yet. The customs service also has its black sheep – a few of their guys working this border crossing were also fired and charged.”

In the end, however, Europe may be willing to tolerate a certain amount of cigarette smuggling as long as the border is secure against illegals.

“Europe is concerned mostly with illegal migration and terrorism, and we are definitely seeing much less pressure on the Slovak-Ukraine border since the introduction of Schengen controls,” says Vladimír Benč, a researcher with the Slovak Foreign Policy Association.

“On the other hand, we are seeing a negative trend with cigarette and alcohol smuggling, but this is seen by Europe as more of a local issue, one that costs Slovakia tax money but doesn’t really affect the rest of the continent.”

But even the smuggling trade may take a hit following the introduction of a new law that slashes the amount of cigarettes and alcohol locals can legally import.

Martina Kereková, spokesperson for the Customs Directorate, says that people who live near the border now find it more difficult to supplement their incomes by selling cheap smokes and booze from Ukraine.

“The situation on the border is completely different than it used to be,” says Marek Arpáč, the deputy chief of the Petrovce station, as he revs his ATV before another tour of the rugged frontier.

“I think we’ve pretty much got it under control.”