Analysts say there is no reason to worry yet

IN SPITE of Slovakia’s recent success in international and economic affairs, political scientists and observers say there is reason to worry about Slovakia’s development over the coming year. 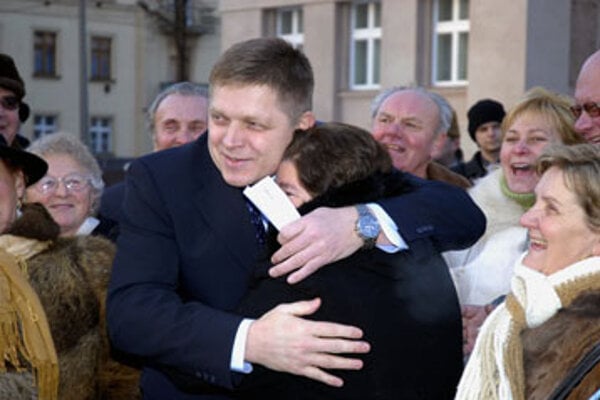 IN SPITE of Slovakia’s recent success in international and economic affairs, political scientists and observers say there is reason to worry about Slovakia’s development over the coming year.

One of Slovakia’s undisputed successes last year was joining the Schengen zone, experts agree. Moreover, economists noted a remarkable economic growth, which they predict will let Slovakia adopt the euro in one year.

But one of the gravest concerns in the next year will be the continued escalation of ethnic tensions, analysts Grigorij Mesežnikov and László Öllös agree.

“The ruling coalition succeeded in strengthening the ethnic element in public life, without consistently implementing the principle of the equality of ethnic groups,” Mesežnikov, the president of the Institute for Public Affairs (IVO) think-tank, told The Slovak Spectator.

Both political scientists pointed to celebrations marking the 15th anniversary of Slovakia’s founding. In his address at the ceremony in Martin on January 2, Prime Minister Robert Fico mentioned ethnic minorities only marginally, while stressing some facts from Slovak history that were not true, historians said.

For example, he referred to the Slavs of the Greater Moravian Empire as “Old Slovaks”.

“The term ‘Old Slovaks’ is not used by experts,” historian Dušan Kováč told the Sme daily in an article from January 3. “The reason is simple. In that period, we do not call them Slovaks, but rather Slavs, as there was no inner differentiation between the Slavs.”

Kováč added that Fico tried to “manipulate with this term.”

Öllös agrees that Fico tried to rewrite history in Martin.

“When politics starts to deal with history, in does really not reflect history, but rather the present,” Öllös told The Slovak Spectator. “It is not interested in the real historical truth, but in a re-writing of history that can ideologically serve power politics and its goals. This is the current situation in Slovakia.”

Mesežnikov said nationalist issues have been brought to the Slovak political scene by the ruling coalition Slovak National Party (SNS), and Smer takes no notice.

“I consider this to be the reason behind a general change of atmosphere in society,” he told The Slovak Spectator. “Nationalism has simply asserted itself much easier, as it got a green light from the ruling coalition.”

According to Öllös, the ruling coalition parties – especially the SNS and Smer – support each other in statements that deepen the ethnic tensions. The day after Fico’s speech in Martin, SNS chairman Ján Slota said that there was no Hungarian minority in Slovakia.

“Those are Slovaks who have Hungarian as their mother tongue,” Slota told the SITA newswire. “A great deal of them are Hungarianised Slovaks.”

Öllös said that with these words, Slota denied that the choice of national identity was a human right, and implied that the state could determine such a thing: “Although it is stated everywhere, including the UN document, that it is one of the basic human rights.”

Mesežnikov said he does not expect representatives of the ruling coalition to argue on the agenda issues, because it has not happened so far.

“But questions related to the nominations for some important positions – either in the public administration, or in strategic companies, or some corruption cases – these things destabilised them greatly in 2007. These were the conflict situations,” Mesežnikov told The Slovak Spectator. “This government has been built on the principle of cronyism, the probability that such a situation might occur is quite high.”

Mesežnikov does not expect the balance of power within the ruling coalition to change this year.

“The strong, dominant party – Smer – is prevailing, which gets it support for all of its proposals, and it even had a bit of help from ultimatums recently,” he said. “After all, it has enough strength and power to use them. And I do not expect any changes in this matter.”

Likewise, the relationships between the ruling parties won’t change, he said.

Both Mesežnikov and Öllös agreed that major conflicts over the distribution of euro funds will crop up within the ruling coalition, and also among the opposition parties.

“This is huge money. They will all want as much of it as possible,” Öllös said.

Mesežnikov thinks that the opposition will stay on the defensive this year, although he does not consider it to be down for the count.

“I think it is nonsense, as the opposition has a relatively solid electoral potential,” he said.

The combined popularity figures for the three opposition parties come close to Smer’s numbers, he added.

“It is too little to get a majority, but it proves that rightist voters are present, and they support their parties to a certain degree,” he said. “And there is a group that could increase this potential if there is a more skilful mobilisation.”

But the internal problems of opposition parties look likely to continue this year, both analysts said. The Hungarian Coalition Party (SMK) lost the confidence of its supporters after Béla Bugár, a long-time head of the party, was replaced by Pál Csáky as the party chairman. In the Christian-Democratic Movement (KDH), a rift is deepening.

“The supporters of former interior minister Vladimír Palko (he wanted to be a chairman of KDH and to replace Pavol Hrušovský but failed) are dragging the party towards nationalism,” Öllös said. “And KDH chief Hrušovský obviously has no other agenda. This is a problem.”

“In the Slovak Democratic and Christian Union (SDKÚ), I feel an internal fatigue spreading,” Mesežnikov added.

Mesežnikov added that there is no new political party in sight that could attract voters.

“From this point of view, the political scene is stabilised,” he said.