SLOVAKS can now change their minds about how they want to save for their pensions. One of Prime Minister Robert Fico’s pet laws has opened up the capitalisation pillar of the pension system for six months, allowing more than 1.5 million people who have been saving for their pensions in private accounts administered by pension fund management companies to quit from now until June. 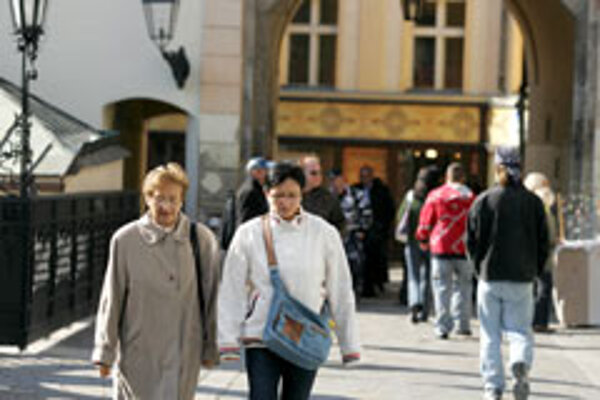 SLOVAKS can now change their minds about how they want to save for their pensions. One of Prime Minister Robert Fico’s pet laws has opened up the capitalisation pillar of the pension system for six months, allowing more than 1.5 million people who have been saving for their pensions in private accounts administered by pension fund management companies to quit from now until June.

Another part of the controversial law – the one that sets out how long citizens must contribute to the pension system before they can retire – will depend on the outcome of an opposition challenge to the Constitutional Court.

Parliament approved an amendment to the social insurance law in a chaotic vote on October 30, drawing criticism from both the creators of the pension reform and the pension fund management companies.

The government’s original plan was to open the system both ways, so that people who missed the deadline for joining the pillar back in 2006 could still enter. But after legislative manoeuvring following a vote where parliament passed laws both in favour and against this concept, the idea was eventually scrapped.

The capitalisation pillar, or second pillar, was one of the main attributes of the Mikuláš Dzurinda cabinet’s old-age pension reform. Clients redirect 50 percent of their social insurance fees into the capitalisation pillar and the rest goes into the first pillar, the pay-as-you-go-system administered by the public social security provider Sociálna Poisťovňa. The first pillar is 100-percent insurance-based, with disbursements that reflect the monthly amount paid into the account and the length of the savings’ lifespan. The third pillar is a voluntary supplementary saving system.

With the system opening up, the Association of Pension Fund Management Companies and Labour Ministry are both preparing their information campaigns.

“The ministry will be informing citizens through labour offices, social insurer Sociálna Poisťovňa and also the media,” Daniela Rodinová of the Labour Ministry’s press department told The Slovak Spectator.

How much a person gets from saving in the second pillar mostly depends on how long they save their money there, the total amount they pay to the private pension management companies (which depends on their income), and the yields from the premiums they invest, according to the ministry.

“It is up to each individual to consider the risks of entering the second pillar or quitting it based on the factors listed above,” Rodinová said.

When is it time to retire?

Opening the system has not been the only change troubling critics of the legislation.

Opposition MPs have already filed a motion with the Constitutional Court to stop some parts of the legislation from entering into force: mainly the regulations pertaining to the minimum amount of time that the citizens need to contribute to the pension system before qualifying for an old age pension.

“It makes no sense to set a minimum time limit for saving in the second pillar,” Ivan Barri, the executive director of the Association of Pension Fund Management Companies, told The Slovak Spectator. “The second pillar is reward-based, which means you have as much as you save. The first pillar is a pay-as-you-go system, so there must be some conditions you have to meet in order to be eligible for a pension.”

The legislation has increased the minimum savings period for pension eligibility from 10 years to 15 years. That applies to both the first pillar and the second pillar.

Before they can request retirement, a Slovak citizen must now pay premiums for at least 15 years, and the calculated pension they would receive must not drop below 1.2 times the subsistence level.

Some people entered the second pillar with the assumption that they would be eligible for a pension after saving for 10 years. The way the legislation has been formed now, they would be forced out of this system, said Barri.

Because the second pillar was established in 2005, the first pensions coming out of this pillar were originally expected to come after 2015.

“However, by then, there will certainly be some decision by the Constitutional Court, or the government might change, and I assume that the term of 15 years will eventually be erased,” he told The Slovak Spectator.

But in the meantime, some first-pillar savers who planned to retire in the next few years might no longer be allowed to under the new legislation, said opposition MP Iveta Radičová.

“The report attached to the legislation noted that the change would affect 800 citizens who would be entitled to retire within the pay-as-you-go system this year, while next year about 1,100 people would be affected,” Radičová told The Slovak Spectator.

Radičová, who was the labour minister in Dzurinda’s government, said changes to the minimum saving time in the pay-as-you-go system are not the main problem. Other countries have done this as well, she said. But these countries have been solving the problems with temporary regulations, so that the measures do not affect those who were already counting on the 10-year limit.

“We are missing these temporary regulations,” she added.

The ministry claims that the legislation is fully in line with the constitution.

According to the new law, the state will no longer pay contributions to the second pillar for those who collect disability pensions. However, those on parental leave and caregivers would still have their contributions covered by the state.