AFTER a rocky start, the mega-tender to build and operate Slovakia’s first electronic highway toll system has taken a new turn. 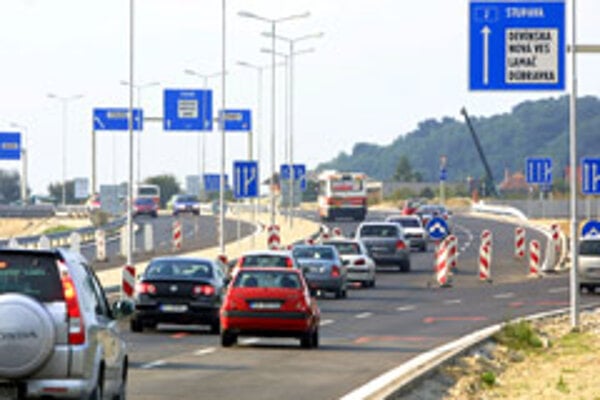 AFTER a rocky start, the mega-tender to build and operate Slovakia’s first electronic highway toll system has taken a new turn.

Last December it seemed that only three of the initial eight bidders would compete for the Sk20-billion (Ř593.8 million) tender, one of the largest announced under Prime Minister Robert Fico. But now five bidders are in the running again.

The Slovak-Swiss consortium ToSy.sk and France’s SanToll have rejoined the German-Dutch consortium Satways, Austria’s Kapsch and Italy’s Slovakpass in the race, after the Public Procurement Office (ÚVO) ruled that the earlier expulsion of the firms was unjustified.

The National Highway Company (NDS) dropped five bidders from the running in November: SanToll, ToSy, Thales Transportation System, Studio Altieri and Housing and Construction Holding. It said very little about its reasons for doing so.

The groups filed their motions with the procurement authority on December 4 and December 6, after NDS turned down their objections.

In early January, the authority said the NDS had to let ToSy.sk and SanToll back into the tender within 30 days.

The tender is for a 14-year contract to build the electronic toll system for a 2,435-kilometre road network, and operate it for 13 years.

Observers have expressed concerns that the expulsion of the candidates and the following developments might slow down the tender. The toll collection is scheduled to start functioning on January 1, 2009 for vehicles weighing over 3.5 tonnes.

It is not yet clear whether anyone will be held accountable for the expulsions.

The shortlisted candidates were asked to submit their bids on January 18.

Elektrovod Holding, the company that heads the ToSy consortium, expected and welcomed this turn of events, said Štefan Fecko of Elektrovod.

The company does not think the expulsion put ToSy at a significant disadvantage, he said.

“Based on the statements of the National Highway Company that it has not yet provided the companies that were not expelled with the information package for the second round of the tender, and that it would do so on January 17 when all the five bidders will receive the documents, there is no dramatic disadvantage for us,” Fecko told The Slovak Spectator.

“However, we can still talk about the need to undergo unpopular activities, such as submitting a request for correction to the National Highway Company and an appeal to the Public Procurement Office, along with depositing collateral,” Fecko added.

The Public Procurement Office said that the earlier expulsion and then the return of the companies to the tender is a standard procedure in line with the public procurement law.

“The fact itself, that the companies were expelled and then returned to the tender, has not pushed them into disadvantage as compared to the other participants,” Helena Fialová, press secretary of ÚVO, told The Slovak Spectator.

Both the Transportation Ministry and NDS have been quiet about the tender, which took three attempts to get rolling, except to say that their institutions respect the ÚVO ruling.

The Sme daily reported that the NDS expelled ToSy because one member of a firm that shaped the consortium was involved in preparing the public procurement process for the electronic toll system.

“The member of the supervisory council is neither a representative nor an employee of the company where this person operates as a member of the council,” Fecko told The Slovak Spectator. “No company is obliged to inform its supervisory council about its planned activities – in this case, the entry into an existing consortium for a tender for the highway toll system.”

According to Fecko, only the NDS had the chance to look into possible links between the NDS advisors and the applicants. The authority had all the necessary information and it could have done that before it signed an agreement with the advisors, he said.

“The Public Procurement Office Commission ruled that the NDS has not demonstrated any legal reason for expelling the applicant,” Fialová said.

The reason Santoll, the Ibertax group, was excluded, according to the NDS, was irregularities in the submitted documentation.

But the ÚVO said that the applicant’s documentation met the requirements and thus the procurer did not have a legal reason for dropping the group, said Fialová.

The SlovakPass consortium is led by the Italian company Autostrade and involves Efkon AG and Stalexport.

The highway authority said that the winning candidate will be the one with the most economically-favourable offer and the most efficient toll collection system. The supplier will be required to submit a security deposit of Sk10 million and have shareholders’ equity of at least Sk800 million. The minimum turnover should be at least Sk2.5 billion.

Currently, Slovakia has a system of highway stickers. Drivers can purchase a one-year pass or passes for shorter time periods. But they pay a flat price regardless of their mileage.

With the new electronic toll system, drivers will only be charged for their actual mileage. The estimated prices for the highway tolls depend on the weight of the vehicle and will range between Sk1.90 and Sk6.23 per kilometre.

Highway stickers will remain in place for passenger cars until approximately 2013, which is when EU legislation requires Slovakia to install an electronic toll system for all the motor vehicle traffic on the country’s paid roads.

The NDS made three attempts to publish the tender. The first attempt, in July, ended after twice as many companies enrolled than were expected. The second round was limited to five companies.

On September 21, the NDS had to withdraw the tender for a second time after a complaint was submitted that the process had not provided equal opportunity.