THE AMERICAN Embassy in Bratislava is celebrating Black History Month, which takes place throughout February in the United States, by opening a new art exhibit in its art space on January 23. 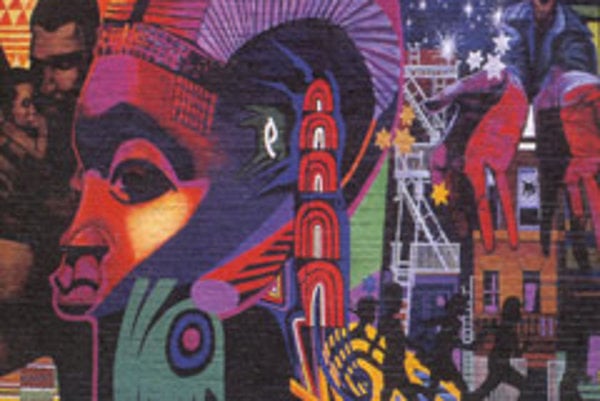 THE AMERICAN Embassy in Bratislava is celebrating Black History Month, which takes place throughout February in the United States, by opening a new art exhibit in its art space on January 23.

The exhibit, entitled Celebrate! Commemorate! Communicate! - African-American Murals, features 16 pictures of murals from cities across the country. The murals were created by some of the country's finest artists, who used the medium to involve their community in topics and emotions ranging from pride to militancy to tracing one's identity.

The exhibit's curator is Janeil Engelstad, who's been studying and creating community art in the United States for 20 years. Last year, Engelstad taught as a Fulbright Scholar at Bratislava's Academy of Fine Arts and Design (VŠVU), where her students put together I Have a Dream ... za plotom (beyond the fence), a public art project that debated the effect of the fence that cuts off the American Embassy from Hviezdoslavovo Square.

"Murals are the heart and soul of the community art movement in the United States," Engelstad writes in the exhibit's programme notes. "The murals in this exhibition are part of a public art movement that grew out of the social and cultural events of the 1960's and 1970's. Using the walls along underpasses and on the sides of buildings as their canvas, the muralists literally moved art from the inside out, where it was available to anyone and everyone."

As part of a presentation at the exhibit's opening, Engelstad showed slides of additional murals not included in the exhibit, as well as some pictures of mosaics and spray can art by African-American artists.

"The difference between graffiti and spray can art," Engelstad said in response to a question from the audience, "is that graffiti is illegal. Spray can art is done with permission from the city, because it wants local artists to contribute to the community."

Engelstad mentioned that the city of Boston, Massachusetts even employs local artists to create murals on Dudley Street, the road that links its diverse Dorchester and Roxbury sections.

Many of the murals at the exhibit evoke images of famous civil rights leaders, such as Malcolm X or Martin Luther King, or African-American celebrities from sports and the arts. Some present messages of peace, unity or Black Pride, or command children to stay in school.

"Murals as an art form began in Mexico," Engelstad told The Slovak Spectator, "so they actually first appeared in America's Latino community before spreading among African-Americans. Something unique the African-American artists did, though, was to weave in symbols from Africa, such as tribal masks and statues, and create images that tied human history to their history."

One of the exhibit's examples of this is Knowledge is Power, Stay in School, painted by Dana Chandler in Boston, in 1972.

A thin mural that runs along the top of the side of a building, its colour scheme is mostly gold, red, green and black, which symbolise African pride and unity. A man standing in the centre has his arms outstretched like Christ on the cross, with a book in each hand. Around him are other people and figures that represent the African-American of the past and present, from tribesmen to soldiers to teachers. Artsolutly Awesome North Philly ... Yeahhh! was painted by Philadelphia artist Marcus Akinlana, in 2007.

Akinlana holds a degree from the School of the Arts Institute of Chicago and worked with the Chicago Public Art Group. In 1995, Art in America Magazine honoured one of his murals as the best public art of that year.

His mural uses dark blues and browns blended with bright orange and pale white. It shows African-American artists, including musicians and a painter, next to some abstract symbolism, such as a crowing rooster encased in a bulb that's roasting over an open fire.

When asked about the mural, Engelstad emphasised that public art, like all other kinds of art, is a matter of personal taste, so symbolism is open to interpretation.

American Ambassador Vincent Obsitnik, who was born in Slovakia but lived in the United States until last year, said he felt a personal connection to the murals' expression of history and identity.

"They're a very nice way for communities to show pride," he told The Slovak Spectator. "If someone visited my home in the US, they would see a lot of Slovak art, like corn husk dolls and crystal, which feels like this, but on a different scale."

Martin Rau, a student of the International Baccalaureate Programme for pre-university students at the Gymnázium Jura Hronca in Bratislava, also formed a connection to the works.

"Seeing this has been a great cultural experience," he told the Spectator. "The murals really show how attitudes in American art and society have changed between the past and now. It makes me think that it would be interesting if Bratislava allocated some sections of the city to make this kind of art accessible to everyone."

"Art in Slovakia is still a little behind walls and kept within the academic world," she told the Spectator. "My wish is that people come away from this with the idea that everyone can be involved in art and that a city and culture benefits when its communities are enabled to express themselves."