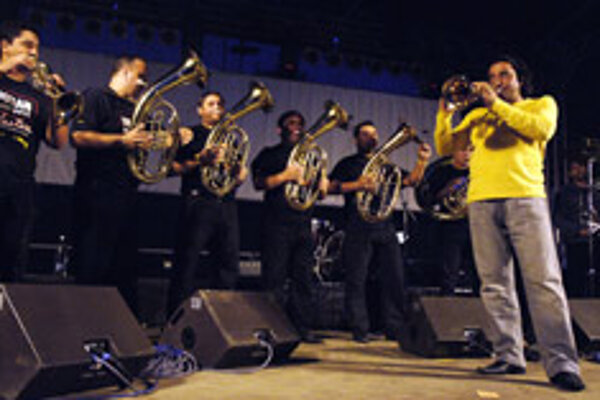 EXHIBITION: THE SERBIAN brass ensemble Boban Markovic Orkestar returns to Bratislava to give a concert on January 30. The 13-member band will play songs from its latest album, The Promise - King of Balkan Brass, released in 2005, as well as its hit Buba Mara from the movie Black Cat, White Cat by Emir Kusturica. Markovic and his brass band have received world acclaim and won numerous awards. The concert in the Arena Theatre at Viedenská 10 starts at 20:00. Standing room tickets cost Sk799 and seats cost Sk1,299. For more information, call 02/6720-2550.

EXHIBITION: Euro, Our Currency - This interactive exhibition displays general information about the currency that Slovakia expects to adopt on January 1, 2009.

EXHIBITION: Sto-Sto-Stone - This exhibition, which is subtitled Stone over Gold or What is Hidden inside Stone, is the fifth of a multi-volume series of exhibitions devoted to materials.

EXHIBITION: The Museum of the Slovak National Parliaments - The museum has opened three exhibitions. The Path to Independence display (until June 2008) presents the Slovak Republic's progress since the split of the Czech-Slovak Federal Republic. The second exhibition, We Got as Gift, presents about 30 gifts that past speakers of parliament received. It will last until the end of September 2008. The Silk Dreams exhibition presents painted silk works by locals.

EXHIBITION: THE ART Gallery in Žilina presents works by young Slovak artist Barbara Kubániová in the exhibition Spot/Spod. Kubániová is a graduate from the Faculty of Arts at the Technical University in Košice, where she studied in the atelier of prominent Slovak artist Rudolf Sikora. The exhibited series of her latest photos is a continuation of her diploma thesis, in which she dealt with the deformation of the human body. The artist perceives deformation as a result of looking at reality from a different point of view. Thus in her photos she displays a figure from below, which completely changes its proportions. This also changes the point of gravity of the human body. Moreover, the fact that the body in the picture does not have a head symbolises the loss of identity. This attitude also highlights the artistic line she pursues in her photos, when it is not understandable on first viewing what the photos depict. The exhibition in the gallery at M. R. Štefánika 2 is open between Tuesday and Friday from 9:00 to 17:00 and on Saturday and Sunday from 10:00 to 17:00. Tickets cost Sk10. For more information, call 041/5622-522.

EXHIBITION: Lithography as Message - Austrian graphic designer Dieter Josef exhibits his graphic works, in which he overlays various ethno motifs captured while wandering around the globe.

EXHIBITION: And Years Went By - This photo display commemorates the 50th anniversary of the Šariš Gallery.