Cleaning house at the Defence Ministry

THE CLEANING operations at the Slovak Defence Ministry, worth more than Sk3 billion (€89 million), have led to a clean-up in the personnel department, but observers say that without systemic changes, it's just a spit-and-polish job. 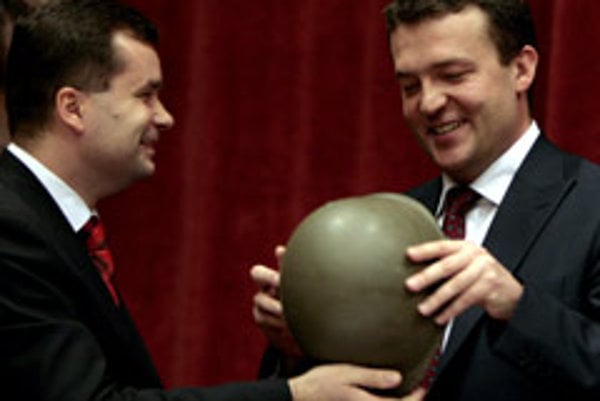 THE CLEANING operations at the Slovak Defence Ministry, worth more than Sk3 billion (€89 million), have led to a clean-up in the personnel department, but observers say that without systemic changes, it's just a spit-and-polish job.

On January 30, František Kašický of the Smer party resigned as defense minister because of the inflated tenders. On the same day, another Smer nominee, Jaroslav Baška took the post. He had been state secretary of the ministry.

When Kašický announced his resignation on January 25, he said he was not responsible for the tenders.

"I do not carry responsibility for the conduct of bureaucrats from an office that acted at odds with regulations," Kašický told the media. "However, I cannot shirk my responsibility to the defence ministry."

When he submitted his resignation to the president, he said: "I feel sorry that this ministry was denounced due to a decision by some officials."

He also said he ordered the cancellation of three dubious tenders for the cleaning and maintenance of barracks. The tenders were investigated and he offered a report on the investigation of a constitutional official.

The opposition had already lashed out at the ministry's plan to spend Sk1 billion annually on cleaning, but Kašický denied that all the money would be spent on that service alone.

Kašický has taken the first steps toward punishing the people directly responsible for the situation. He sacked Vladimír Vasko, the head of the ministry's real estate administration department, who was responsible for administering the tenders.

According to the ČTK newswire, the Slovclean company showed an interest in cleaning the military quarters. One of the associates of the company is the Slovunit firm, in which Martin Borguľa has shares, according to the Trade Registry website. He is an associate in the publisher of the leftist weekly Slovo, which tends to support the ruling coalition partner, Kašický's Smer party.

When asked whether he would have fired Kašický over the inflated tenders, Prime Minister Robert Fico responded: "Kašický resigned, so any question about sacking him is hypothetical."

Pavel Nechala, lawyer for Transparency International Slovakia, said replacing the minister is simply not enough, and that systemic changes at the ministry are needed. Security analyst Ivo Samson agreed.

"The whole system of controls failed there," Samson told The Slovak Spectator. "After all, the Defence Ministry has two intelligence services that did not uncover anything. The dubious tenders were discovered by journalists."

Samson also pointed out that it was very improbable that nobody at the ministry noticed where almost Sk4 billion went.

"The whole budget for the Defence Ministry is about Sk30 billion, and nobody really cared that four billion went just for cleaning," he said. "That is really strange!"

According to Samson, the whole ministry is a labyrinth, and no minister has yet "cleaned" the middle layer of clerks.

The new minister, Baška, told the Sme daily that he did not know about the dubious tenders.

"According to the organisational order (of the ministry), I was not responsible for these things," he said, in a story published on January 31.

He added that he intended to undertake measures that would prevent similar problems in the future. However, he did not specify what he would do.

Last year, Fico recalled Movement for a Democratic Slovakia (HZDS) nominee Miroslav Jureňa as agriculture minister due to shady land transfers. The firing resulted in a clash between the HZDS and Fico's Smer party that pushed Vladimír Mečiar and the HZDS to the brink of quitting the ruling coalition.

But this time the prime minister praised the outgoing minister and made it clear that this is not the end of Kašický's political career.

"He is a consummate professional in the area of military affairs and I regret (his resignation), but regret does not belong in politics," Fico told the press.

The Smer party is still interested in using Kašický's expertise in the area of security, Fico said.

Meanwhile, the SITA newswire reported that a source close to the HZDS leadership said Mečiar was planning to request that Fico sack Kašický. The HZDS leadership felt that Kašický carried a greater responsibility for the problems in his department than Jureňa had for the land transfer scandal.

The defence ministry witnessed several scandals under Kašický's leadership. The first followed the huge explosion at the Military Maintenance Company in Nováky last March that killed eight employees. The explosion occurred after several times the legal limit of explosives were stored on site, an investigation found.

Then the Ikores construction company won a billion-crown contract from the defence ministry without a public tender. The contract for building the military archives was given by a direct order.

Fico bought a flat for his mother in an Ikores building, under unclear circumstances.