PRIME Minister Robert Fico now has a pact of stability to make the home stretch to euro adoption smoother for Slovakia. 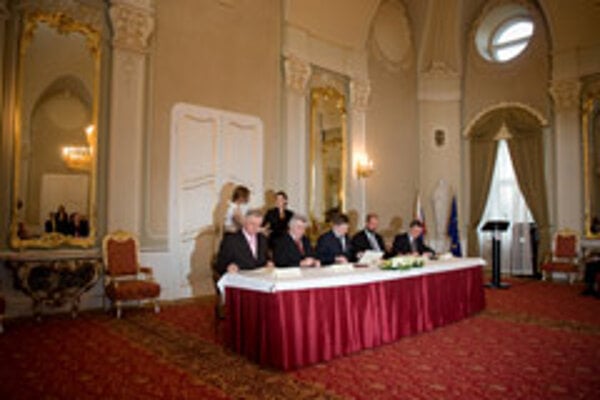 Businesses, unions and towns have pledged to be euro-friendly. (Source: SITA)
Font size:A-|A+

PRIME Minister Robert Fico now has a pact of stability to make the home stretch to euro adoption smoother for Slovakia.

After some prodding, the employers, trade unions and municipalities signed the government-made declaration on the adoption and use of the euro, and promised to restrain from steps that would threaten the country's euro plans. Slovakia hopes to adopt the euro on January 1, 2009.

Fico called the document a historic milestone on Slovakia's way to the unified EU currency. But critics said it is just another piece of paper that comes too late.

The government, in turn, promised to reduce the public finance deficit and produce quality legislation linked to euro adoption.

The signatories of the so-called "stability pact" will also monitor the development of prices for goods and services, and take action whenever they climb without justification. The government even said that intentional abuse of the crown-to-euro shift would be considered a crime.

"United we have proven that if there is a will, we are able to bring together opinions on significant issues," Fico told the press.

President Ivan Gašparovič is on Fico's side over the euro pact. He said the document will help eliminate the risks in meeting the Maastricht criteria, the SITA newswire reported.

The unions spent the most time contemplating whether or not to sign the pact. Finally, the KOZ officially declared that unions would respect labour productivity growth as a decisive factor for wage growth demands, said KOZ president Milan Gazdík.

"We are fully aware of our share of the responsibility for the adoption of euro, otherwise we would have not signed the declaration," Gazdík told The Slovak Spectator. "However, I won't try to hide that we had been considering signing the declaration for a longer time."

The pact ties the unions' hands when it comes to negotiating higher salaries for the workers they represent.

The country's aim to meet the Maastricht criteria, as far as the public finance deficit is concerned, could be an obstacle that prevents the unions from demanding more and thus gaining more in social sphere, Gazdík said.

As for spreading the word about the euro, he said that trade unions can be useful because the KOZ structures cover all of Slovakia.

"With one single click, we can send any materials or information from the trade union headquarters to 35 unions, which could forward the information further to 6,000 local organisations," Gazdík told the Spectator.

Trade union functionaries and members of the union can talk to the masses face-to-face on a daily basis, he said. Even local organisations have their own publications.

"We have the tools," Gazdík said. "What we still need to do is to work on a more unified subsystem."

The pact also says that companies would have to sign ethical guidelines, which the government hopes will prevent unjustifiable price hikes.

Tomáš Malatinský, president of the Association of Employer Unions, told the public service Slovak Television (STV) that the union would pressure its members to adopt guidelines that would stop businesses from abusing the switch to the euro.

The Association of Towns and Villages has already started campaigning among its members so that economists, controllers and, most importantly, the heads of municipalities are in a position to explain the process to local residents, the association's Michal Sýkora told STV.

The business community has remained cautious about the pact. The Entrepreneurs Association of Slovakia said it is concerned that preparations for euro adoption might be used to beef up state interventions in the economy, the Sme daily reported.

The opposition Slovak Democratic and Christian Union (SDKÚ) refused to sign the declaration, suggesting that the party is unwilling to bear responsibility for the mistakes the Fico government has made during the preparation for euro adoption.

The SDKÚ does not trust the prime minister's declaration that he will guarantee post-adoption prices with regulations. The party suggests that "instead of demagogy", Fico should focus on preparing citizens for the actual use of the EU currency.

Meanwhile, the opposition Christian Democratic Movement (KDH) has questioned January 1, 2009 as a reasonable date for adopting the euro. It said that the adoption carries risks that are far too high.

Both market watchers and the National Bank of Slovakia said that there is room to discuss the risks and seek avenues to eliminate them, but it's too late for a debate on delaying euro adoption.