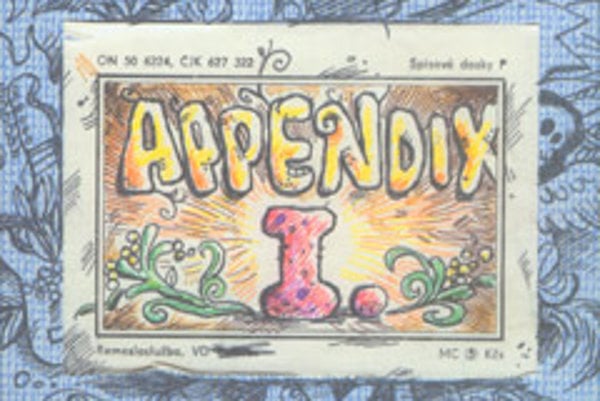 Appendix I. is the band's debut album. (Source: Courtesy of Appendix)
Font size:A-|A+

APPENDIX calls its music experimental, and its recently released debut album, Appendix I., proves it right.

A fixture of Bratislava's alternative music scene for over a decade, Appendix is descended from bands such as Primus and Faith No More, with a distinct style that fits into about a half dozen genres. It also borrows from the Red Hot Chili Peppers by tempering its rock sound with melodic, singable vocals.

Sometimes, the band is held back by lyrics that are cleverly conceived, but often too abstract. From the look of the CD booklet, which is wonderfully illustrated with images and colours that are surely meant to communicate the songs' deeper meaning, Appendix definitely had a concept in mind for the album, but must have decided to leave the lyrics open to interpretation.

The album's opening track is Rain, which immediately shows the band's flawless transition between styles. It starts like a tribal chant in a rainforest, with the soft beat of bongo drums, the thrum of Lukáš Fila's bass and the whisper of pipes supporting lead singer Juraj Benetin's raspy voice, then descends into hard rock. Toward the middle, the pipes come back in for a long solo and are imitated by Benetin's jamming guitar lines.

The next track, Overloaded, begins with a suave, bluesy sound by sax player Marián Jaslovský that is soon hijacked by drummer Henrich Offermann, who immediately picks up the pace. This sets the mood for Benetin to come in with a gravelly grunt sung on a string of nonsense syllables, which turns into lyrics delivered in a choppy rhythm reminiscent of the Chili Peppers' "Can't Stop".

The first song to show the classic signs of a singable melody is the third track, Missing. Benetin lets the lyrics flow and, in between Jaslovský's fluid sax lines, his voice soars high and sinks low. The result is quite involving.

Evolve is along the same lines, with a catchy melody that's set amid a jazz-rock sound. But here, the song's literal evolution from jazz-rock to hard rock to a contemplative ballad toward the end and back to jazz-rock would have been better defined with lyrics that were less philosophical than:

As I evolve I grow to know that nothing I solve,

no norm I form to torment myself, no why, no cry,

no future will last and fast only past will fill me.

The next track, Change, is the album's most stylistically diverse. After a few seconds of calm, the music explodes into a guitar-based rap in which Benetin runs down a list of 16 statements such as "I wined I want I'll win" and "I laid I load I'll lead", then completely switches gear into jazz scat and soul.

But the song's lyrics are too static for its eclectic musical style:

A different form, a new set of rules, but I am the same.

A different life, a new concept of time, but I am the same.

I want to be free, to change what I was, but I am the same.

One of the CD's most interesting tracks is Invocation, which has lyrics comprised of phrases from 19 books about philosophy, science and religion. The words are set to a rock beat, which makes it sound like Benetin is reciting an angry mantra. Part of the way through, the style transforms to flamenco guitar and syncopated rhythms, which gives it an exotic, pulsating feeling.

Overall, Appendix is a talented band that has obviously formed a connection that allows it the freedom to experiment without sounding disjointed. In its MySpace profile, it laments that it still calls a garage home and that it has yet to receive the recognition it believes it deserves.

If it keeps releasing albums as creative as Appendix I., its time will come.

Appendix will christen this album with a show at the SubClub, Nábrežie Arm Gen. L. Svobodu, in Bratislava on February 6 at 20:00. For tickets, visit www.ticket-art.sk or call 02/5441-1183. For more information on the band, go to www.appendix.sk.