FIFTEEN years after the fledgling Czech and Slovak republics abandoned the Czechoslovak crown - a currency they had used under their federal state - an attempt in 1993 to swindle the new Bratislava government out of millions of crowns on the monetary switch is still inching its way through the court system. 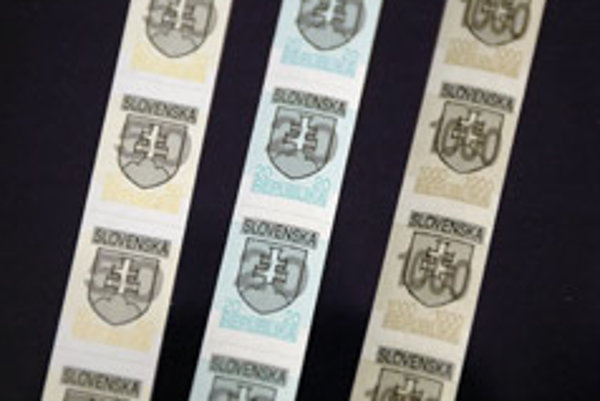 FIFTEEN years after the fledgling Czech and Slovak republics abandoned the Czechoslovak crown - a currency they had used under their federal state - an attempt in 1993 to swindle the new Bratislava government out of millions of crowns on the monetary switch is still inching its way through the court system.

The Bratislava regional court heard testimony from half a dozen witnesses in the case on February 4 and 5 before adjourning proceedings again until early March. Most of the witnesses called failed to show up, and one changed his testimony, claiming investigators had coerced him into implicating the men on trial during his original deposition in 1994.

After so many years, only one thing is certain in the "kolková aféra", as the case is known to Slovaks: Three men were arrested near Komárno on the Hungarian border in 1993 carrying thousands of forged "kolky", or official Slovak stamps, that they intended to fix to 91 million crowns in worthless Czechoslovak currency. By fixing the fake stamps to the expired bills, they hoped to be able to use them as legal tender.

Everything else about the planned fraud - ranging from who was behind it to what the motive was to why it has taken so long to bring it to court - remains a mystery.

To understand one possible motive behind the kolková aféra - counterfeiting money - we have to return to the twilight of the Czechoslovak currency, when Slovakia on February 8, 1993 began putting kolky on former federal banknotes as a prelude to introducing the new Slovak currency. After that date, old banknotes which didn't have kolky were no longer valid.

According to the prosecution, ringleaders Peter Reich and Jozef Nendza from March to November that year got their hands on 20,000 Deutschmarks and the templates for making the false kolky, which they turned over to a further two accomplices, Miroslav Weizer and Vladimír Manka. The latter allegedly ran a copy shop at Laurinská 17 in Bratislava, and made the forgeries on a laser printer.

On November 19, 1993 Reich, Manka and Weizer were arrested at a gas station with the kolky, which they intended to take to Hungary to use for stamping unmarked bills.

At the time, the arrest caused a stir, because top officials at the National Bank of Slovakia (NBS) had been warning for weeks of just such a threat, saying that foreign reserves of old Czechoslovak currency could flood the Slovak economy.

"Billions of crowns in federal thousand-crown notes were not stamped at the time of currency separation and remained abroad," said then-NBS Governor Vladimír Masár. "The bank has learned that there is a risk of serious currency instability," added Masár's deputy, Marián Jusko.

In response, the NBS removed the stamped thousand-crown Czechoslovak notes from circulation on November 5 - almost two weeks before the gang was arrested. After this, the only way the kolky fraud could have worked was if a special NBS committee had approved the exchange of the counterfeit notes for Slovak currency before February 28, 1994. So why would the culprits have risked prison if they had nothing to gain?

Jaroslav Ivor, then the head of the Slovak police corps investigation department, told The Slovak Spectator that the police had failed to identify a motive in the case. "That was a question that gave us a lot of trouble," he said.

At the time the kolková aféra hit the headlines, Prime Minister Vladimír Mečiar was having serious problems with the Slovak National Party, his coalition partner, and was facing the prospect of early elections. Despite these difficulties, however, Mečiar still had time to warn the public in early November that false banknotes were soon to be brought into the country.

"An attack has been prepared against the Slovak currency," said Mečiar in his regular address on Slovak Radio. "They plan to place [on the financial market] large sums of thousand crown notes with fake stamps. But we'll do what we have to do."

According to political scientist Grigorij Mesežnikov from the Institute for Public Affairs, in crisis situations "Mečiar has often created the impression of a threat to himself or to little Slovakia - a country that he himself was resolved to protect and save."

Two weeks after Mečiar's warning, the forged stamps were intercepted. Intelligence community sources said that the prime minister could have been informed - or "informed" - of the planned fraud by Jaroslav Svěchota, his former deputy from Mečiar's time as interior minister in 1990-91. "At the time of the kolková aféra, Svěchota was a trusted associated of Vladimír Mečiar," said Igor Cibula, who was then head of counter-intelligence with the SIS secret service.

Svěchota has often been linked to one of the main actors in the kolková aféra, Jozef Nendza, who was shot dead in 1996. An intelligence community source told The Slovak Spectator that Nendza and Svěchota had been "in contact" at the time, while Peter Reich told police investigators that Svěchota had suggested his name to Nendza as a possible co-conspirator. And in testimony before the court, Reich's former secretary at the Bratislava elementary school where he was principal said that Reich and Svěchota had known each other. Svěchota's grandson even attended Reich's school, she said.

Cibula added that at the time of his death, Nendza was carrying forged identity documents of the type issued only by the police or secret service, increasing speculation that he was an undercover agent.

Ivor, who handled the case until he was fired by Mečiar in March 1995, underlined the significance of the high-profile names that have been linked to the kolková aféra. "Among the witnesses we debriefed were top political and state functionaries, as well as the leadership of the secret service, which is very interesting."

Cibula compared the kolková aféra to the 1995 kidnapping of the sitting president's son, Michal Kováč Jr., which was also blamed on the secret service. "Both crimes were committed in a very amateurish and improvisational manner," he said.

Former President Kováč also said he believes the kolková aféra was an intelligence plot. "I discussed the case with NBS Governor Masár and Interior Minister Jozef Tuchyňa, who Mečiar claimed was involved, at the end of 1993," he said. "I was informed that the case was a ploy - that someone from the secret service, I was told it was Svěchota, planned the whole thing, and then made it look as if the culprits had been caught."

Vladimír Mitro, who at the time led the secret service, said that "the way it was done fits the mentality and the style of the political leadership at the time".

However, he said he believed that it was what it at first seemed - a standard fraud. "I think this was some kind of a trial, and if it had gone well, it could have led to something bigger. But it didn't work out."