THE INHABITANTS of Veľký Šariš in the Prešov Region have created the largest collection of family trees in Slovakia. 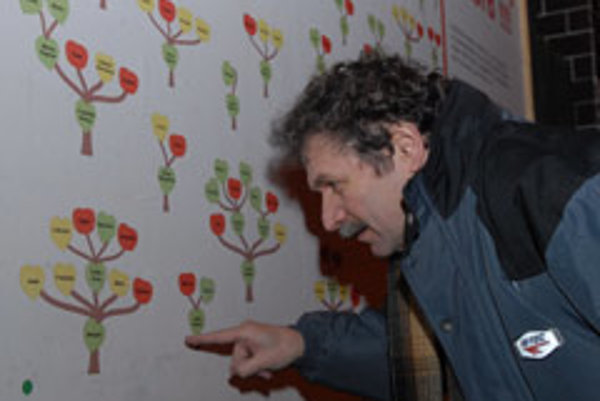 Jozef and Mária are the most common names in Veľký Šariš. (Source: SITA)
Font size:A-|A+

THE INHABITANTS of Veľký Šariš in the Prešov Region have created the largest collection of family trees in Slovakia.

Veľký Šariš keeps growing and this project is dedicated to all families that have moved to our town recently," the project's author, Martin Sárossy, told the daily. "Any prejudice against new settlers is out of line. Like a healthy forest in which the trees are of different ages, in our town too, new families live together with old ones."

It took two months to create the Forest of Family Trees. The project was a part of the celebration of the 790th anniversary of the first written mention of Veľký Šariš, and the volunteers from the Rákoci civic association took part in it. The association is led by Martin Sárossy, who is known for being an activist in Veľký Šariš. This summer, he attracted media attention by leading a group of volunteers who cleaned and fixed Šariš Castle.

The aim of Forest of Family Trees project was to strengthen the community by helping everyone get to know each other.

In cooperation with the town hall, all new families in the town were sent a letter introducing the project. In September, billboards appeared on the square showing family trees. The people of Veľký Šariš completed their family trees with felt-tipped pens, the Sme daily wrote.

"Therefore, we came close to a world record in the biggest collection of family trees," Sárossy said. "Finally, we processed all the completed family trees into a decorative form. In order to draw attention, we searched for the list of family names of our predecessors from 1864."

After some adapting and retouching, the family trees were shown in the central part of the billboards.

"We put up a large-scale board that we've prepared during the holiday season," Sárossy continued.

The initiative discovered some interesting facts about Veľký Šariš:

- Jozef and Mária are the most common names

- the largest family tree has 28 members

- the most frequent number of family members is four, five and six.

- the most frequent male names in the Veľký Šariš family trees are Jozef, Peter, Ján, Martin and Štefan.