U. S. Steel Košice staying the course in Slovakia

WHEN David Lohr arrived in Slovakia in 2005 to take over as president of U. S. Steel Košice, he listed construction of a new galvanising line as one of his priorities. Now in January 2008, the galvanising line is rolling out new products and the company is taking great pride in successfully achieving this important goal. Over time, the company expects to supply every car company in Europe, particularly within the Visegrad Four. 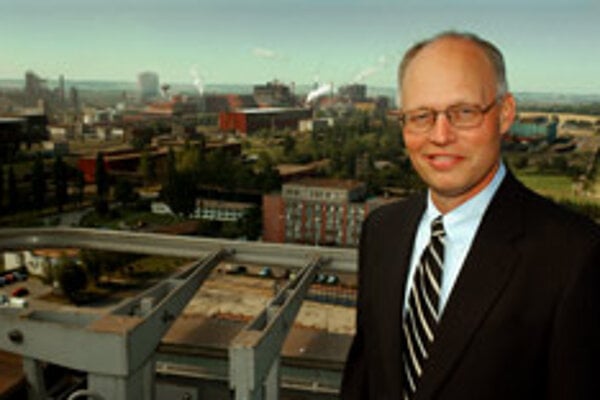 WHEN David Lohr arrived in Slovakia in 2005 to take over as president of U. S. Steel Košice, he listed construction of a new galvanising line as one of his priorities. Now in January 2008, the galvanising line is rolling out new products and the company is taking great pride in successfully achieving this important goal. Over time, the company expects to supply every car company in Europe, particularly within the Visegrad Four.

U. S. Steel Košice has described the launch of the new galvanising line, which officially opened in September 2007 at a cost of $160 million, as one of the most important events in the company's history.

David Lohr (DL): The new galvanising line is definitely the single biggest investment we have made here. The new line not only symbolises our ability to meet the changing needs of our customers, but it also changes the skyline of our plant in the community where we are active. We supply galvanised sheet to a number of customers, including automotive and appliance manufacturers, as well as customers in the construction industries. Simply put, people who need products that are corrosion-resistant and of the highest quality are buying these products. As for the automotive industry, which has some of the most demanding customers, we have been enjoying the interest of car companies in Europe for some time. In fact, the way the car-making businesses work is that they buy our products on annual contracts, sometimes two- or three-year contracts. Over time I would expect that we would be supplying all of the car companies - particularly those within the Visegrad Four - with our products.

DL: We do not reveal our plans until we are ready to do something, but there are a lot of ideas we are discussing at this time. What is certain is that we are not done investing in these facilities. We will continue improving product quality, environmental con-trols, productivity and safety, which is our top priority.

When U. S. Steel entered the Eastern Slovak Ironworks in 2000, the investor promised to invest $700 million into the plant by 2010. The commitment has been fulfilled. Can you specify what investments have been made?

DL: That is right - the commitment was fulfilled in 2006. We have completed many projects throughout the plant, but we have invested a significant amount of money into environmental improvements so that we can comply with all environmental regulations. A large portion of our total investments - over $250 million - has been poured into this commitment.

International steel company Arcelor-Mittal bought the Orava metallurgical plant of Slovakia's OFZ company in early December 2007. What does the arrival of this strong steel company mean for U. S. Steel Košice?

DL: They produce alloys and from time to time we buy those alloys from them. We also purchase alloys from other suppliers as well. ArcelorMittal is a very good and strong competitor, though the company they have bought is not our competition.

Is the U. S. Steel Corporation planning acquisitions in Europe or other countries?

DL: We are always investigating opportunities, but those opportunities have to make strategic sense to our company. These efforts are all coordinated by our strategic planning group in Pittsburgh. We have some specific interests, though, and we continue to look for raw material suppliers in Europe.

When you arrived in Košice in mid-2005, you listed the launch of the new galvanising line as one of your main ambitions. Now it is working. What is your next ambition?

DL: Even though the galvanising line is operational, it does not mean that the work is completely done. We are continuing to monitor the new line, but as of now, it is running quite well. Customers are happy and I personally am happy, too. We have a good team here.

However, we are also doing a lot of other work - not glamorous work, but the kind that takes a lot of details and focus. But all of our work is paying off. Our competition is very fierce. If you are not improving, if you are not getting better, you will fall behind. We want to stay ahead of our competition.

How would you evaluate the European steel market?

DL: Experts predict that 2008 should be a year of good consumption in Europe. The production of major steel-making companies con-tinues to be strong. It is important that we concentrate on our own work because we cannot control the market. We will take what the market gives us and do the best we can.

What about competition from Asia?

DL: Chinese imports have been particularly strong into Europe. I mean, the EU was a net exporter of steel until 2005. Since then things have really changed, mostly due to the surge in imports from China, which is very unpredictable. China does not necessarily behave according the same set of rules we follow, so it is something we have to be concerned about and monitor.

What has U. S. Steel Košice brought to Slovakia since its arrival in 2000? Did it work the other way around? Has something been exported from Slovakia back to Pittsburgh?

DL: One thing U. S. Steel has brought is a strong market-oriented approach to doing business with a strong customer-oriented focus. We have worked hard to continually develop the markets we serve and to create and produce the products those markets need. What our customers want is a strong sense for fulfilling commitments and business ethics, and we continue to meet those expectations every day.

As for Pittsburgh, one thing we have done is we have moved a lot of people from Europe to the United States. We have facilities throughout North America, and today we have more Slovaks in the U.S. than we have Americans in Košice. It is a good experience for everyone involved.

Do you see the Slovak investment environment changing?

DL: Companies are still investing in Slovakia and they invest for the very same reasons they have invested for the last few years. The government has been stable, the economy is growing fast, and the flat tax has been positive, and these are things that are attractive to businesses. Slovakia still has one of the highest unemployment levels in Europe, so that indicates that there are still plenty of opportunities for investment.

What about changes to the Labour Code? Have these changes affected the operation of U. S. Steel Košice?

DL: The Labour Code has not changed that significantly. I don't think the changes influence a company's decision to invest in Slovakia. We have seen some impact in terms of working time. The changes reduce the flexibility of the labour a bit. It probably affects some of our contractors and suppliers more than us. But clearly the changes are more labour-friendly than business-friendly.

Some companies have already been complaining that they have difficulties hiring workers. Do you have similar problems?

DL: There are some specific areas where the skills are more in demand and you have to work a bit harder to find the right people, but we have not seen any big impact yet. I think it is also about the disparity between the eastern and western parts of the country. Eastern Slovakia still has a tremendously high unemployment rate. Basically, everyone who wants to work is working in western Slovakia.

I think it is going to take the government, business and educators in schools getting together and doing

a better job of educating young people in the future. We are ready for more growth and more sophisticated, value-added, high-technology businesses, but there is a lot of work to be done in terms of working with the universities and schools and helping them to shape the curriculum to meet the changing needs of the Slovak economy.