V4 stands together to attract investors

IT IS NATURAL that nations in the Central European region should compete, but it is nonetheless crucial that they understand that together they have an appeal for foreign investors who are looking at the whole region when picking their new homes, said Antal Heizer, Hungarian Ambassador to Slovakia. 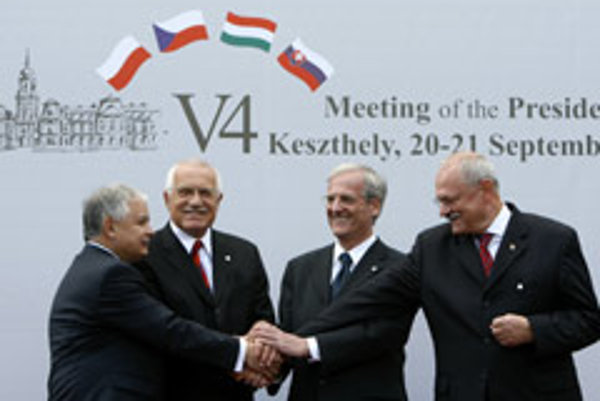 From left, Presidents Lech Kaczynski of Poland, Václav Klaus of the Czech Republic, László Sólyom of Hungary and Ivan Gašparovič of Slovakia during a summit in Keszthely, Hungary in September 2007. (Source: Reuters)
Font size:A-|A+

IT IS NATURAL that nations in the Central European region should compete, but it is nonetheless crucial that they understand that together they have an appeal for foreign investors who are looking at the whole region when picking their new homes, said Antal Heizer, Hungarian Ambassador to Slovakia.

The Visegrad region, formed by the Czech Republic, Hungary, Poland and Slovakia, has had remarkable success aligning and strengthening their economies to meet EU challenges and compete effectively with larger and more developed countries, both regionally and internationally, added his Polish colleague Bogdan Wrzochalski. According to Czech Ambassador Vladimír Galuška, the intensification of regional cooperation, energy safety and competitiveness on internal markets are all among the Visegrad Four countries' priorities.

The Slovak Spectator spoke to ambassadors Galuška and Heizer and charge d'affaires Wrzochalski about the challenges the Visegrad Four faces today, its importance and the ways the group can contribute to each country's performance within the European Union.

The Slovak Spectator (TSS): What is the significance of the Visegrad region in the European Union? What issues do these countries coordinate on the EU level?

Vladimír Galuška (VG): The agenda of the Visegrad Group traditionally corresponds with the priorities of the Council of the European Union chairmanship, which is now focusing on the ongoing discussion over the future of Europe, the new institutional structure of the European Union and further EU enlargement. Other priorities are more intensive regional cooperation, the stabilisation of the West Balkans, energy safety and fortifying trans-Atlantic ties and intercultural dialogue. Competitiveness in the areas of the internal market, research and education, the information society, the protection of the environment and cooperation with other regions and international organisations are also on the list.

The Visegrad Group also wants to actively address current issues of the EU reform process while its priorities also involve cooperation with Moldavia, support for the democratisation process in Belarus and developing super-standard relations with Ukraine. However, attention is also being paid to more remote regions such as the Caucasus and Central Asia.

One of the recent topics has been a discussion of each country's energy security within the country's joint working group and the mutual support and coordination of candidacies to international institutions.

Antal Heizer (AH): The European Union is a union of regions. This is true not only in the sense that regions within particular countries are gaining an even more important role, but also in the fact that the cooperation between countries with identical or almost identical geo-political situations is intensifying. Within the European Union, regional and national interests can be advocated and pursued only through firm unions or through those created for particular issues. For example, today almost 20 EU member countries are participating in the working group that has been dealing with the US and Canada visa issues, however, there are also groups of countries that lobby for the membership of Croatia, Albania and the FYROM in NATO. Firm unions like the North Council or the Visegrad Group open a door for even tighter cooperation since the countries can regularly, and, we have to say, successfully, coordinate their stands on parliamentary and governmental levels.

Just to mention a concrete example: in June 2007, the Visegrad countries united and very resolutely proceeded over the matter of entry into the Schengen zone. Since December 21, our borders have in fact become more open. Also, the cooperation of each committee can immediately gain an EU momentum in the area of agriculture or energy safety, where we also share strong interests.

Bogdan Wrzochalski (BW): The Visegrad region has had remarkable success aligning and strengthening their economies to meet challenges of the enlarging European Union and compete effectively with larger and more developed countries both regionally and internationally. Governments, regulators and market participants have shared information and knowledge in order to achieve growth and competitiveness and sustain GDP growth at between four and five percent, through the right mix of capital investment, technology and productivity. The success of the Visegrad model has also been bolstered by a number of similar agreements both within the wider European region and throughout the world.

TSS: What is the business potential of the Visegrad region? These countries have been competitors in terms of attracting foreign investments. Do you think that this competition still exists? What are the business areas in which these countries cooperate?

VG: Cooperation within the V4 is multi-faceted and it touches on the widest possible spectrum of activities - with an exemption of trade and economy. Countries in the V4 and the International Visegrad Fund support all kind of non-commercial cooperation, however they do not specifically focus on economic projects and commercial activities.

However, the fact that these countries closely cooperate in other areas, for example in building infrastructure, can make the whole region, including all countries, more attractive for foreign investors.

The Visegrad group has been pushing for the further liberalisation of the internal market in line with the four basic freedoms. One of the V4 priorities is also the coordination of efforts to cancel the still-existing transition periods for the free move of labour from V4 and other new EU member countries.

AH: Competition is the basic element of the European spirit. It is natural that we compete. At the same time, it must be understood that our countries jointly and not separately have an appeal to foreign investors because they are striving to gain the Central European market. Jointly, we are already a good competitive market, or at least we could be. What is very important though is that this does not happen at the disadvantage of any of us.

Over the past couple years there has been a lot of talk about the rapid development of Slovakia's car industry. However, only few know that it has opened up serious possibilities for Hungary as well, for example through the spread of a sub-supplier network, and by now our annual turnover has reached €5 billion, which represents a 40 percent growth.

BW: In globalised markets no country is immune from competition from all corners of the globe. Increasingly, Visegrad countries have been competing against other growth economies such as Russia, China and India, both as places to invest and as sources of funding. But the development of Asia has also brought growth to this region as well, as new groups of foreign investors seek to target opportunities in high-growth regions of the world.

Here, our countries are leveraging the experience of their business throughout the Asia Pacific region to support the opening of markets and to enable the Visegrad region to make the most of its strategic geographic, economic and political advantages in a global marketplace. The most important areas for cooperation are energy, transport and agriculture products.

TSS: Has the entry to the Schengen area brought new prospects of cooperation between these countries?

VG: The entry to the Schengen zone has not really brought many changes for cooperation within V4. However, the entry can make cross-border projects easier when the partners of the projects are third countries. Also, cooperation among V4 countries in the area of spreading democracy and respect for human rights in the world could be easier after entry to Schengen along with a wider use of the International Visegrad Fund.

AH: The joining of the Schengen area had first and foremost an emotive importance. We still remember the times when we had no passports or when we got one we needed entry and departure visas for even visiting other countries in the region, not to mention the different currency and customs limitations. The Visegrad Four cooperation in fact has faced no barriers since the countries joined the European Union on May 1, 2004. Certainly, it is important that now we do not even have to stop at the border crossings, but what is even more important is that we can finally start believing that, even in this space mutilated by historical traumas, by jointly looking ahead it will be easier for all. In this sense, Schengen is writing history and opening up new possibilities.

TSS: Has the Visegrad Group maintained its significance? Are the countries still active in this grouping?

VG: The Visegrad Group has reached one of its most intense stages of cooperation - its "Golden Age". Over the course of its existence the Visegrad format has become a respected part of regional politics in Central Europe while over the past couple years, the membership of the Visegrad countries in the European Union has made EU issues a natural part of consultations within the V4 framework. As well as being a tool to enforce responsible neighbouring and regional politics, this framework helps to overcome bilateral tensions between the countries along with forming the policies of the EU and increasing the prestige of the EU.

AH: The great dilemma of the Visegrad Four belonged to the moment we joined the European Union in 2004. At that time, our countries' leaders opted for intensifying cooperation and now it has proven to have been the right step. The civic cooperation has also reached respectable levels thanks to boosting the sources of the Visegrad Fund, which I personally consider even more important than cooperation on the state level. The fact is there might be some loopholes in the parliamentary or governmental sphere, or, better said, there might be some less or more active stages, but I now feel that we have reached a particularly active time. The number of grant applications has swelled, which shows that citizens and non-governmental organisations are interested in supporting cooperation. I am certain that developing the civic links has had a positive impact on the future of the region and all of Europe.