SLOVAKIA's politicians are divided on Kosovo, which declared independence from Serbia on February 17. 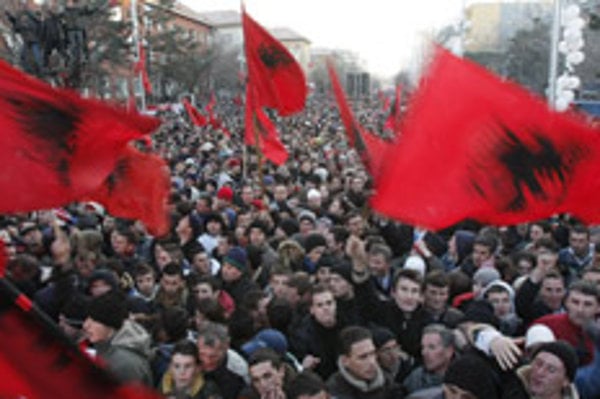 Kosovo is celebrating as Slovakia searches for its stance on the issue. (Source: SITA)
Font size:A-|A+  Comments disabled

SLOVAKIA's politicians are divided on Kosovo, which declared independence from Serbia on February 17.

The only political party that has unequivocally recognised it is the Hungarian Coalition Party (SMK). Other politicians have voiced concern that Kosovo's independence could serve as a precedent for the 521,000-strong Hungarian minority in Slovakia.

Slovak Prime Minister Robert Fico said that Kosovo's unilateral declaration of independence was a mistake that could worsen tensions.

"Let us consider the interests of Serbia a bit," Fico said as quoted by the SITA newswire on February 20.

Fico also said that Slovakia would not recognise Kosovo until its international legal status changes. He called on the UN Security Council to adopt a solution and the European Union to decide on a unified stance.

Kubiš said that Slovakia cannot recognise Kosovo at this point, but state officials will continue to monitor the situation closely.

"We will return to the issue after evaluating the developments in Kosovo, the region and the position of the international community," he told the Slovak Radio on February 18. "We will do so in about a hundred and twenty days."

Deputy Prime Minister Dušan Čaplovič was much sharper in his criticism than Kubiš or even the prime minister.

Čaplovič declared a connection between Kosovo and the problem of organised crime.

"Everyone knows what it is all about," Čaplovič said. "We all know it's a route for drugs, human trafficking and arms to pour into Europe."

In fact, he went so far as to call Kosovo "Drug-ovo", and repeated that he would never support its independence.

In reaction, the SMK said that a deputy PM of a democratic country should never demean another country in the way he did.

"Čaplovič proved with this statement that he is not worthy of being a deputy PM," the SMK press release reads.

"I am sure that it will take not a year or two, but maybe even ten years, until countries can take a final position on Kosovo," Gašparovič said after meeting with Kubiš as quoted by the aktualne.sk website on February 20. "And today, no one knows which standpoint is right."

František Šebej, who in the 1990s served as vice chairman of the Parliamentary Assembly of the Council of Europe, said that by declaring its independence, Kosovo only made official what had been known for a long time.

"Regardless of how hurtful it is and of what the 150,000 Serbs who still live in Kosovo think about it, the development was heading in this direction," Šebej told The Slovak Spectator.

Kosovo's independence is not a security threat for Europe, said Ivo Samson, a security analyst with the Slovak Foreign Policy Association think tank.

"These are alarmist rumours spread mainly by certain groups in Central Europe," Samson told The Slovak Spectator. "Kosovo is a specific case that is in no way comparable to the situation of the Hungarian minority. Kosovo has been a protectorate, de facto an independent state, for some time already."

According to Samson, ethnic Albanian inhabitants in Kosovo were in a completely different situation than the Hungarian minority is in Central Europe.

Šebej also disagrees with the opinion that the separation of Kosovo could lead to the disintegration of Europe.

What Kosovar Albanians, who form a big majority there, had to go through at the hands of Slobodan Miloševič put Kosovo in a unique situation that is completely different from what other ethnic minorities in Europe have experienced, Šebej said.

"It cannot be considered a precedent," he concluded.

According to Samson, the fact that all countries with a Hungarian minority are members of the EU and NATO stabilises Central Europe.

"EU and NATO members have pledged not to lay territorial claims on their neighbours," Samson said. "So from this point of view, Europe is safe."

Šebej said that nothing can prevent Slovak politicians from eventually recognising Kosovo as independent.

"They will do it, but hypocritically," Šebej said.

The ruling coalition is using the Kosovo issue as a populist tool to win nationalist voters, said Šebej.

"(Slovak cabinet representatives) will wait to see how the situation develops," he said. "I cannot imagine that Slovakia would defy reality in the long term."

Kosovo's path towards independence began with the war in 1999, when during the term of Slobodan Miloševič, Serbian military and paramilitary units killed thousands of ethnic Albanians in the province and hunted tens of thousands of them out of their homes, according to Šebej.

Kosovar Albanians and Serbs have both committed atrocities, so it can be expected that the former wishes for independence," Šebej told The Slovak Spectator.

Šebej does not expect military conflict over the province, which would mainly harm the Serbian population there, he said.

And the organised crime in Kosovo is by no means more widespread than in neighbouring Balkan countries, said Šebej.

"I'm not sure whether Kosovo will turn quickly into a viable state, but I think it will," he said. "At least to such an extent as Macedonia, Albania, or Montenegro."

Samson explained why the crime rate is high in Kosovo.

"Everyone knows why that is," he told The Slovak Spectator. "Kosovo went through a civil war, and now it's the European Union's issue to deal with. By recognising its independence, the EU can retain influence and control."

Had NATO not intervened in 1999, the Kosovars would still be living in refugee camps in Macedonia and scattered throughout neighbouring countries, Samson said.

"And ethnic Albanians in Kosovo would hate Europe for having let it happen," he said.

According to Samson, it would have created a dangerous situation for Europe, since it would have made the Kosovar Albanians more open to radical Islamists looking to take advantage of their anger.