SLOVAKIA has been hard pressed to find an effective way to collect the broadcast licence fees that television and radio owners pay monthly for public broadcasters. Though observers agree that there is a need for an effective system, they say so far the search has come up empty. 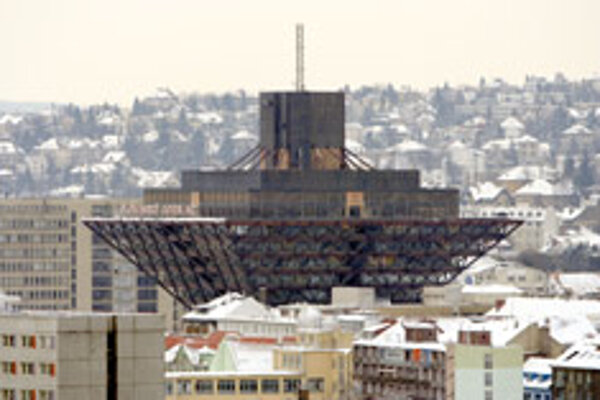 SLOVAKIA has been hard pressed to find an effective way to collect the broadcast licence fees that television and radio owners pay monthly for public broadcasters. Though observers agree that there is a need for an effective system, they say so far the search has come up empty.

Parliament on February 15 passed a law obliging each electricity consumer, which means every household or firm, to pay a monthly fee to the public service Slovak Television (STV ) and Slovak Radio (SRo).

Up to now, television and radio owners had paid the fee based on the assumption that each household owns a radio and 99 percent of households have television sets. If a household notified authorities to the contrary, it was exempt from the fee.

The fee will remain unchanged at Sk140 and will be shared between the STV and SRo at a 7:3 ratio. How much firms pay will be based on the number of employees. Those with three to nine will pay Sk140, while those with over a 1,000 employees will pay Sk14,000 monthly.

The fees are one way of financing the STV and SRo, which have struggled since 1989. The government said that by using the new system of fee collection, the state should see Sk3.1 billion flow into the public media budgets. The previous system usually brought in slightly more than Sk2 billion. The ministry also said that approximately a third of the people who own sets evade the fees.

Culture Minister Marek Maďarič said that the new law is the first step towards stabilising the public broadcasters and solving their financial woes.

"Without changes to the financing of public media, we would not only fail to reverse the trend but the situation could lead to the collapse and demise of public broadcasting," Madarič told the public service Slovak Television on February 15.

The Culture Minister also said that his ministry will prepare an agreement between the state and public media that would regulate media financing. However, the opposition said the law has its flaws.

Slovak Democratic and Christian Union MP Tomáš Galbavý said that the only goal of the law is to increase the volume of finances that fills the pockets of public media.

"This does not guarantee higher quality broadcasts or the independence of the STV and SRo from the ruling power," Galbavý said.

According to Galbavý, it is unacceptable that payments for a public service are now based on electricity consumption, which could result in people who cannot afford a television or radio, or who don't want one, having to pay the fee.

But the public media have welcomed the change.

Želmíra Habánová, spokes-woman for STV, said the positive aspect of the law is that it will increase STV's finances for the next three to four years.

The Slovak Radio has been waiting for a similar law for several years, said its general director, Miloslava Zemková.

"It will definitely help us, at least for several years," Zemková said on February 15. She added that the SRo could collect Sk50-Sk55 million more than before.

Vladimír Talian, head of the Slovak Radio Council that oversees the radio, told The Slovak Spectator that the law will force even the third of households that evade the fees to start paying them.

According to Talian, the law is a pragmatic solution to the public media's financial realities.

"The law limits the number of people who can evade the payments," Talian told The Slovak Spectator. "This is the solution politicians have come up with."

Miroslav Kollár, a media analyst and member of the STV Council, said that the new law is simply wrong. However, he also admitted that the previous legislation caused the public media to lose billions.

"The politicians simply chose a technical solution that will prevent people from evading the law and at the same time collect the most possible money," Kollár told The Slovak Spectator.

However, Kollár also warned that business people might end up paying for the public service broadcast twice: once as employers and once for their households.

"If the broadcast licence fees are for public service, people should not pay for it twice because they receive the service only once," Kollár said. "Employers should not have to pay."

The law's authors admit that the legislation is not a permanent solution and are already preparing an agreement between the media and state, Kollár said.

"If the politicians wanted to solve the problem of public media financing through this law, they should have increased the licence fees," Kollár said. "But they don't have the courage to do that. In all fairness, though, none of the governments do."

According to Kollár, other European countries use broadcast fees to prevent direct political pressure on media representatives. But the fees don't work this way in Slovakia, he said. Instead, the shortcomings in the law pushed the media into economic dependence on the state, Kollár said.

"After all, in Slovakia it does not matter how the formal rules are set, considering the political culture and what all the politicians expect from public media because these always give way to political dependence," Kollár told The Slovak Spectator.

Kollár also criticised the quality of the STV programme and its financial management.

"When I see what is happening there, I regret every single crown of public funds that's sent there," Kollár added.