SLOVAKIA is now firmly on the world map of car production, as home to three major car factories. These have brought significant benefits - attracting a chain of suppliers and additional investments - as well as challenges, not least the need to find skilled labour to fill the new jobs. 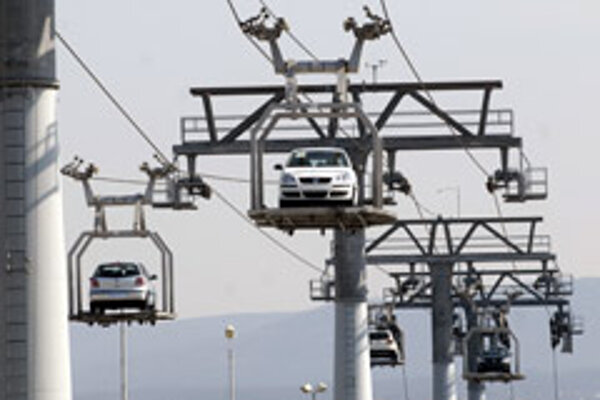 SLOVAKIA is now firmly on the world map of car production, as home to three major car factories. These have brought significant benefits - attracting a chain of suppliers and additional investments - as well as challenges, not least the need to find skilled labour to fill the new jobs.

Slovakia, home to plants making Volkswagen, PSA Peugeot Citroen and Kia cars, is now the world's largest per capita car producer, making 106 cars per 1,000 inhabitants, Ján Lešinský, head of the Association of Automotive Engineers and Technicians of Slovakia, told the Pravda daily. The Czech Republic is next, producing 91 cars per 1,000 citizens, followed by Belgium, Slovenia and Japan.

Both producers and market analysts welcome this badge of honour and predict production will swell further.

While in 2006 automotive industry production made up about 30 percent of total industrial production, during the first six months of 2007, its share exceeded 35 percent, Jozef Uhrík, president of the Automotive Industry Association, told the SITA news wire.

Almost 300,000 cars rolled off Slovak production lines in 2006; the association estimates that this will have almost doubled in 2007 to more than 550,000 units. Uhrík cited optimistic forecasts predicting the number will climb further, to 880,000 per annum, by 2010.

However, the car industry's greatest success in 2007, according to Uhrík, was the growth in production by car component suppliers, which outstripped that of the manufacturers.

"While we have three major automotive players, three families of sub-suppliers have emerged, which are gradually becoming interlinked and supplying components to two or even all the three producers, hence bringing more balance to their operations," Uhrík said.

Not just a flash in the pan

The gradually-developing network of component suppliers has also contributed to this trend. Particularly important in this respect is the share of car components sourced in Slovakia, which in the case of PSA Peugeot Citroen has been steadily increasing. The planned launch of a new model by the company, which will be built at its Slovak plant in 2009, will further boost this share.

According to Švec, his company has faith in the region's potential and plans to stay for more than just a brief period, adding that PSA Peugeot Citroen regards its investment in Slovakia as strategic.

"We did not come here intending to stay for just a year or two," Švec told The Slovak Spectator. "We have the potential for growth."

However, Švec was quick to add that a lot depends on the labour market, which needs to be flexible and offer the most efficient access to the Slovak workforce's abilities and skills.

"The traditions and experiences of people in this area are a great asset for us car producers," Vladimír Machalík, from the communications department of Volkswagen Slovakia, told The Slovak Spectator, adding that Slovakia's other advantages are its location and proximity to Volkswagen's main target markets.

However, Machalík agrees that one of the main risks is the lack of qualified labour in Slovakia, an area in which the state's approach to education could play a crucial role.

"It is necessary to encourage students to study technical subjects," Machalík said. "However, within the European Union hiring foreign labour is still an option."

With the car industry booming in Slovakia, the car makers as well as component producers have complained repeatedly about the lack of qualified labour here. In 2007, PSA Peugeot Citroen employed as many as 100 Romanian workers to fill labour shortages during the summer holiday period.

Two of the car producers are planning to update their Slovak production portfolios.

High demand for the Octavia, with output at Volkswagen's Mladá Boleslav factory in the Czech Republic now running at maximum capacity, lies behind the decision to start new production in Slovakia, Machalík said. The launch of the Škoda Octavia model has so far required investment valued at €14 million in the Bratislava plant.

The Škoda Octavia model will replace production of the Volkswagen Polo in Bratislava. In 2008 the company plans to make 25,000 Octavias, which should comprise about 20 percent of the plant's total production.

The other models rolling off the lines at Volkswagen's Bratislava plant, which will make up the remaining 80 percent of its output, are the Volkswagen Touareg, the Audi Q7 and the Porsche Cayenne.

The factory is already planning for a further increase in Octavia production in the future, said Machalík.

Meanwhile, the PSA Peugeot Citroen plant in Trnava is planning to add a new model to the Peugeot 207 currently being made there. Production should begin in 2009.

Preparations for the new model began in August last year.

"The challenge for the Trnava car plant in 2008 will be final preparations for the production launch of a completely new model," said Švec. In its early stages, it will be produced solely in Slovakia, he added.

"Successful preparation will allow us to plan for commercial production to begin in spring 2009," Švec said, pointing out that parallel production of two models will bring a further increase in production.

The Trnava plant has maintained its position as one of the best plants in the PSA group and Švec says it has become the main supplier of the Peugeot 207 to the demanding German market. In 2008 production should grow to almost 200,000 cars.

Almost all the output of VW's Slovak plants was exported: over one-fifth to Germany, and over 13 percent to the United States. Less than half of one percent of the output of the plants was sold in Slovakia.

Kia Motors Slovakia produced 145,000 cars in 2007. This year it plans to boost car production by more than half, to 225,000. Kia's plant in Žilina should reach its full capacity of 300,000 cars per annum in 2010, according to the SITA newswire. The five-door version of the Kia cee'd model made up the biggest portion of last year's output, with 89,500 cars manufactured.

Almost all of Kia's Žilina-based plant is exported, the biggest portion going to Germany. Only two percent of production goes to the local market.