SOME THINGS in life are so universal they don't need a translation. Dance is one of them. 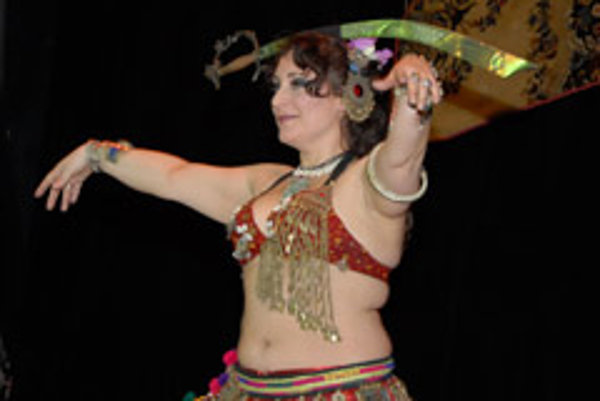 SOME THINGS in life are so universal they don't need a translation. Dance is one of them.

Belly dancing came to Slovakia some time ago, and its artists have been trying ever since to attract dancers from abroad to teach and perform here.

One of their traditions is the annual Oriental Night's Dream (Sen noci orientálnej), which took place at the Nové Mesto Culture Centre in Bratislava on February 15. The performance's organisers included the Zlatá Špirála (Golden Spiral) dance centre, which is led by Xenia Chalasová, and the Karavana oriental dance group.

The performers came from different regions of Slovakia and the Czech Republic, which is home to Afghani troupes The Saffron Tribe and Bakhtar and American belly dancer Bri Hurley.

The performance also included sabre and dagger fights and a form of Balinese dancing with sticks. The intermissions were filled with Oriental poetry, live Afghani music and a small bazaar out in the hall.

All in all, it provided a wonderful oriental atmosphere on a cold February night.

The Slovak Spectator spoke to Bri Hurley, a California native who has been studying belly dancing since childhood. Since 2000, she has been living, dancing and teaching in the Czech Republic.

Hurley calls her method of dancing and teaching "Ba'thani", from the Sumerian word "Dat Ba'thani", which means "Lady of the Serpent". It embodies the influences and styles she has absorbed over the years with an emphasis on a grounded posture and active use of the elements, as well as the connection between the dancers and creating one's own choreography.

The Slovak Spectator (TSS): Why did you come to the Czech Republic and what has inspired you to stay?

Bri Hurley (BH): I had heard that Prague was beautiful, so while I was travelling through Asia and Europe, I made a point to go to the Czech Republic. I met wonderful people there and had such a nice feeling that I visited them again and again until it became America that I was visiting and Czech where I was staying. Besides that what made me stay was that I could make a living doing something that I love. It is not often that one finds the right job and can also live from it. It is especially difficult in the arts.

TSS: Your tribal style of oriental dance is experiencing a boom in the Czech Republic. What is its future?

TSS: Are there big differences between American and Czech dancers?

BH: One of the biggest differences is that oriental dancing has been in the Czech Republic for such a short time, so it is easy to fool the audience with a pretty and confident girl dancing what she imagines is Oriental. It's also easy to fool new students. Some teachers use only two movements from oriental and the rest is something else.

In the USA, especially in centres like San Francisco and Los Angeles, it is impossible for a dancer who has studied for only two or three years to teach. There are some good dancers here, but, you know, I have very high standards. I've seen this style since I was eight years old.

TSS: What makes oriental dance, which is foreign to American and Central European cultures, so attractive?

BH: I think it's the mystery and romance of the "Orient" that initially attracts us as adults. The music is beautiful and the dance is so feminine that women around the world can relate to it. If it is danced well, it is very effective. It shows a woman who is comfortable with herself, her sexuality and her strength. Her character comes out in the dance and I think that makes women use it as a way of expressing themselves.

My experience has shown in the Czech Republic that women are more comfortable with the dance and more energised by it than men. It is far from what the men are familiar with and often they don't know how to react. Of course, if the dancer is flirtatious, the men like it and the women don't. But the dance is really a celebration of women, so the only time I have seen it done coquettishly is by Westerners.

TSS: Do you think that Americans and Europeans can learn to hear the complex oriental rhythms?

BH: Of course. Anyone can learn to hear and enjoy the rhythms. If you have a desire to learn and like the music, each time you listen it you hear more. It's so beautiful!

TSS: You have started giving lessons and workshops in Slovakia. How did this come about and how do you find it?

BH: I was contacted by Xenia from the Centrum Špirála after we performed together at the Let's Dance festival in Prague. I really enjoy working with her. She is a great organiser and a lovely lady. Organising takes so much communication and time, and it is always a pleasure to work with good people.

TSS: You performed twice in Slovakia, last time being at the Oriental Night's Dream show in Bratislava. How did the audience react? What was your impression of the atmosphere?

BH: I enjoy the atmosphere at the shows I've done in Bratislava. I think the dancers are quite respectful of each other and relaxed, rather than the insecure and competitive types you sometimes encounter in the dance world. The more popular or famous a dancer is here, the less she worries about competition and the friendlier she is.

It can be really silly sometimes, because even if you dance the same style as someone else, you will look different. Each woman has a slightly different style of movement and a character that shows through the dance. Also, different bodies make certain movements more easy for some than for others. Some women shimmy easily, some women love the "camel movement". More importantly, in each song, the music is different and the dancer should be responding to the music and interpreting it. We are all so much stronger together. It is such a pity when there is this silly competitiveness between dancers. I am happy that my experience in Slovakia has been so good in this regard.

The audiences seems to enjoy themselves but it is hard to get a feeling from only two shows in Bratislava. They have both been on a big stage with bright lights that remove the performers from the people. So really, I can't give you a good answer for this.

BH: Yes, well, I speak and understand some Czech, but it really depends on the subject. I'm not really a language person. I have developed some strange vocabularies from what I do in my life. I talk about oriental dance and teach it in Czech, although my grammar is often very funny for people. I can talk about construction projects because I have been repairing my house for some years. Some accents and dialects are easier for me.

I know a few words and phrases in Turkish and a few in Arabic. I use the internet to find translations for the oriental songs and I can ask friends here or in America for translations. I do think it is important to feel the emotion of the songs and that is best when you understand something of the words. In the end, though, songs are all about feeling.