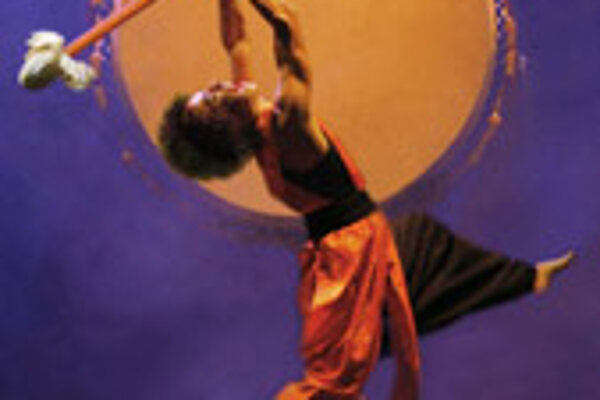 LIVE MUSIC: AFTER thrilling Košice in February, the ten young musicians of the world-renowned Yamato - The Drummers of Japan are bringing their breathtaking show on traditional Wadaiko drums to the Slovak capital. Tickets cost from Sk590 to Sk1,590. This audio-visual show by the high-energy performance group takes place at the Incheba Expo Arena at Viedenská cesta in Bratislava on March 8 starting at 20:00. For more information, go to www.xl.sk or call 02/121-11.

CLASSICAL MUSIC: Orchestra Spirit of Europe - The Austrian chamber orchestra, which originally launched this event in 2004 to mark the expansion of the EU, performs works by Prokofiev, Shostakovich and Beethoven.

CLASSICAL MUSIC: The Spectre's Bride - Soloists of the Slovak National Theatre (SND) Adriana Kohútková, Ľudovít Ludha, Peter Mikuláš join the choir and orchestra of the SND under the baton of Oliver Dohnányi to present a cantata by Czech composer Antonín Dvořák, based on Karel Jaromír Erben's poetry.

CLASSICAL MUSIC: Mystical Oratorio Rattle/Bell - A unique orchestra consisting of 180 musicians from the Bratislava Oratorio Orchestra, the Lúčnica choir and many others playing various bells, jingles, rattles and other similar instruments perform under composer and conductor Ján Valach. The concert is a fundraising event for the Foundation of Cancer Research.

LIVE MUSIC: Naughty by Nature - Another hip-hop legend performs in the capital.

FOLKLORE: African Evening - Nine female dancers and seven male drummers from the TiDiTade band perform the music and dance of Western Africa. A workshop in the Kramáre culture centre follows the next day (admission: Sk300).

LIVE MUSIC: Launch party for Jánošík CD - Experimental musician Julo Fujak plays at the launch party for his new CD, which provides a soundtrack for the classic silent film about Jánošík, the Slovak Robin Hood.

EXHIBITION: THE EXHIBITION Give Me Your Image in Liptovský Mikuláš presents works by Dutch photographer Bertien van Manen. The documentary photographer uses the images to interpret interiors of selected households in various towns of Europe in an untraditional way. She focused her camera on photo portraits she saw in these households. These intimate views of family photographs within domestic environments explore the role that family photographs play in our lives, how they shape our identity and form both personal history and shared history. This exhibition was already presented during the Month of Photography in Bratislava. The display in the House of Photography at Tranovského 3 in Liptovský Mikuláš is open daily, except Monday, from 10:00 to 17:00 until April 13. For more information, call 044/5624-454.

EXHIBITION: Slovakia, Slovaks - This touring display presents the history of the country through historical photos and postcards. The exhibition is part of an international project of cooperation between the Getty Conservation Institute in Los Angeles, the Academy of Fine Arts and Design (VŠVU) in Bratislava and the Slovak National Library (SNK) in Martin.