Studying Central Europe from Down Under

ŠTEFAN AUER has always wanted to travel the world, but in his student days it was almost impossible - as it was for anyone living in communist Czechoslovakia. Emigration seemed to be the only way out, so he chose it, and left for West Germany in 1988, just a year before the fall of communism. 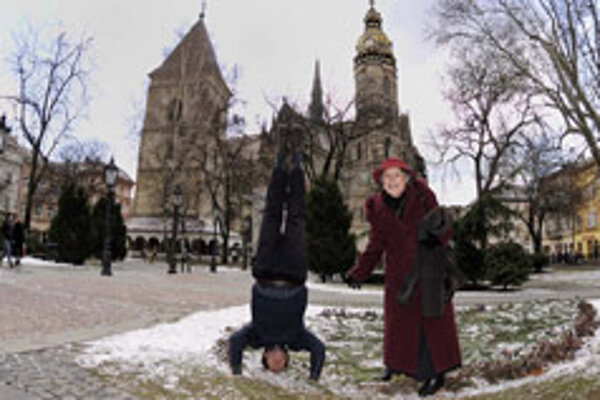 ŠTEFAN AUER has always wanted to travel the world, but in his student days it was almost impossible - as it was for anyone living in communist Czechoslovakia. Emigration seemed to be the only way out, so he chose it, and left for West Germany in 1988, just a year before the fall of communism.

"I wasn't a dissident, or anything like that, but I despised communism and could not envisage spending the rest of my life in Czechoslovakia which back then felt a bit like a big, boring, grey prison," he says.

Auer finished high school in Košice in 1982, with no real idea of what he wanted to do with his life.

"I enrolled to study electrical engineering and enjoyed some parts of it quite a lot, but I soon decided that I didn't want to become an engineer, not least because just about everyone was becoming an engineer in communist Czechoslovakia," he explains. Having left school with his studies uncompleted, he wanted to study photography, which by then had become his passion, but failed to get into the renowned FAMU Film and Television School in Prague. Instead, he began training as a primary school teacher at Pavol Jozef Šafárik University in Prešov, but when the opportunity arose he left the country without finishing his studies there.

"It was only after I emigrated to Cologne in West Germany that I was able to enjoy the advantages of a Western-style university," Auer says. In Germany he studied philosophy, education, German language and literature.

Currently, Auer is a senior lecturer in history and politics at the School of Social Sciences at La Trobe University in Melbourne, Australia, where he also is a deputy director of La Trobe's Innovative Universities European Union Centre. Following his studies in communist Czechoslovakia and West Germany, he received his PhD from the University of Melbourne. Since then he's worked as an academic in Ireland and in Australia.

According to Auer, the German educational system gives students a lot of freedom, on the assumption that they are responsible adults who can best decide for themselves what, when and how to study. The downside is that many students never finish their degrees, and those who do may end up spending up to ten years studying.

"I was also one of those 'ewiger Studenten' [eternal students] myself, and it may well be that I would never have finished a degree had it not been for my eventual move to Melbourne," Auer admits.

As for the Irish and Australian educational system, he believes they are very similar, with one or two slight differences. An average Irish student might have more factual knowledge than his Australian counterpart, but Australians tend to be more creative and get better accustomed to the idea of university, which is to create independent thinkers, Auer says.

"One should be extremely careful with these generalisations," he says, adding that he worked with students from all around the world who were excellent, irrespective of their country of origin.

Even though he lives in Australia now, Auer has devoted his academic career to Europe. His current research interests include: the revolutions of 1989 in Central Europe, and their more recent reincarnations; nationalism in Central Europe; and the enlargement of the EU. Studying Europe from Australia is not the same as living in Europe and experiencing its current challenges, Auer says, but this way he has a bit more distance, which can at times be advantageous.

Auer's major scholarly work, his book Liberal Nationalism in Central Europe won the prize for Best Book in European Studies 2005 from the University Association for Contemporary European Studies. He has published a number of works looking at political processes and political thinking in Central and Eastern Europe. Auer's research interests were partly motivated by the desire to understand communism - that "surreal regime" under which he grew up.

"One of the peculiarities of these communist regimes was the fact that, despite the internationalist pretensions of Marxist ideology, communists in all the countries of the Eastern bloc, including Czechoslovakia, skilfully managed to exploit nationalist sentiments for their own purposes," he explains. In his research Auer came to the conclusion that the collapse of communism was partly facilitated by what he calls 'liberal nationalism'.

"Communism collapsed also because the peoples of Central Europe managed to assert their independence from the Soviet Union in order to rejoin Europe, which also meant to rejoin the liberal democratic West," he says. He is aware that democracy in Slovakia has many defects. He says he was particularly disappointed with the outcome of the last elections.

"Yet what I find encouraging is the fact that even populist and extreme nationalists don't behave as one would expect from leaders with such ideological predispositions," Auer claims. For example, while he doesn't want to understate what he regards as the xenophobic sentiments that people like Ján Slota represent, he finds it heartening to see that even the Slovak National Party is somewhat constrained in its policies.

"The fact that Slovakia is these days a full member of the EU means that there are certain limits as to how far the likes of Slota can go," he believes.

With the demise of the communist regime in Slovakia, Auer's attitude to living abroad has changed as well. His reasons for living in Australia are very personal now. While living in Cologne, he met an Australian girl from Melbourne.

"She is now my wife, we have two gorgeous children and I have learned to enjoy the Australian lifestyle," Auer says, admitting that before he met his present wife, Australia didn't really exist on his mental map.

"While I am still proud to be from Košice, Melbourne is definitely my adopted home," he says. What he misses are his friends and family, most of whom still live in Košice.