EXPERTS and politicians might agree that Slovakia's education system needs reform, but their opinions about how to do it differ wildly. A new education bill, proposed by the Ministry of Education, and promising sweeping reform, has caused outrage among its opponents. 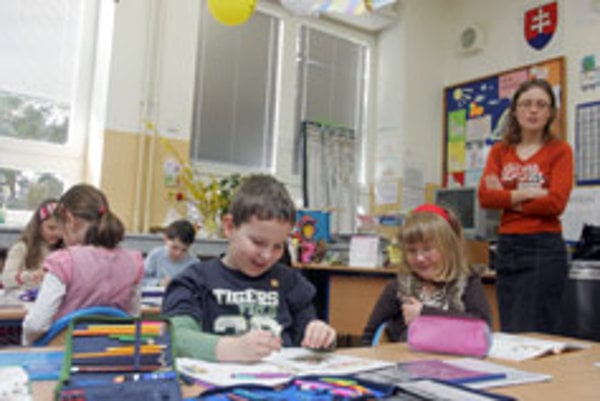 EXPERTS and politicians might agree that Slovakia's education system needs reform, but their opinions about how to do it differ wildly. A new education bill, proposed by the Ministry of Education, and promising sweeping reform, has caused outrage among its opponents.

The Education Minister, Ján Mikolaj (a nominee of the Slovak National Party), persuaded cabinet colleagues on March 5 to approve his ministry's education bill. But opponents remain unconvinced and had demanded its withdrawal from the government's agenda. Now that the government has approved the bill, few doubt that it will be passed by parliament given the ruling coalition's majority.

Mikolaj argues that education reform will get under way, thanks to the new bill, as soon as this September. But some non-governmental organisations and experts, as well as opposition representatives, are convinced that the bill will do more harm than good. They think it would be better to preserve the current, albeit unsatisfactory, status quo.

After the cabinet session, Mikolaj explained to the media that the bill will initiate a so-called two-level education programme: about seventy percent of curricula will be set by the state; the rest will be created by schools according to school education programmes. Under the new bill, the number of pupils and students in each class should be reduced.

"We are giving schools the real chance to manage themselves," Mikolaj said, speaking to the TV news channel TA3 after the cabinet session on March 5.

"The principle underlying the reform is to give opportunity and a freer hand to teachers; today, they are bound to such an extent that they are simply unable to change lessons to allow for their own methods and individual approaches," Mikolaj continued.

One day before the cabinet session, a group of NGOs issued a joint statement in which they demanded that the ministry withdraw the bill from discussion because of its poor quality. The petition was signed by analysts from the Institute for a Well-Managed Society, from the Conservative Institute (KI), from the Association of School Psychologists, and from the civic association Happy Days.

"These superficial, poorly coordinated and hastily prepared changes in schools are not motivated by professional, but rather by political intentions. The future of our schools is being threatened by incompetent decisions which will be irreparable," the statement said, according to the SITA newswire.

The NGOs think that education reform should first be debated through a broad public discussion, which the minister should initiate. Also, according to the activists , the ministry should publish all documents relating to reform. In particular, they want to see the publication of state education programmmes, which should be obligatory for schools from this September.

The statement further stresses that Mikolaj's bill "includes trivial details about school canteens, but fails to address the desperate state of professional education, for example".

The expert commissions of the education ministry have worked only on a simple adjustment of curricula, merely deleting redundant ones," the authors of the petition argue. "In such cases, it is dishonest and misleading to call a simple cancellation of redundant curricula in mathematics, Slovak language, history and in other subjects of general education a reform of content," they wrote.

Former education minister Martin Fronc (Christian Democratic Movement) thinks that the bill is not a reforming one, and that it only stipulates a reduction in curricula.

"They don't know what reform means. Reform means a different way of educating, so that the environment is creative, so that students can achieve more," Fronc told The Slovak Spectator.

SDKÚ MP Tatiana Rosová was even more critical of the bill. Speaking on public television channel STV on March 9, she said: "This is a harsh centralisation which, given the current global exchange of information and experience not least among the teaching community, will condemn us to fall behind."

Both Fronc and Zuzana Humajová, an expert at the non-governmental Conservative Institute (KI), also agree that the governmental bill does not amount to a decentralisation of the education system: "The bill introduces a two-level model of state and school education programs, which will bring a certain division of responsibilities for the education between the state and the school, but this division will be merely formal," Humajová stressed to The Slovak Spectator.

According to Humajová, the state will continue to dictate to schools which issues are compulsory within subjects, and which are optional. "So to a great extent, freedom of action for schools is not imminent," Humajová said.

Opponents of the bill also criticised the fact that publishing textbooks will remain centrally regulated and the role of the state - in the form of school inspection - will be strengthened.

"So this is no liberalisation. If someone is supposed to teach freely, he or she has to be free to choose textbooks, too. Except in cases of xenophobia, racism, and so on," Fronc told The Slovak Spectator.

Furthermore, Fronc thinks that besides decentralisation, the relationship between teacher and pupil should change, becoming more of a partnership so that the pupil is not a mere subordinate of the teacher. Humajová added that an effective education reform would bring a change to the whole education system in the first place, not just small adjustments of the current one, which is evidently clumsy and ineffective. Change should be implemented at all levels, according to Humajová, not just in schools but encompassing for instance, the system of training teachers, publishing textbooks, or the control and evaluation of teachers.

"Everything should be mutually harmonised and balanced. A good law would enable us to open the system, i.e. to make a clear transfer of responsibility from the central level to the level of schools, but would also offer an elaborate system of checks and balances, so that the system does not collapse," Humajová told The Slovak Spectator.

Humajová thinks, as Fronc does, that it is crucial to consider carefully the timing of a transitional period, before the launch of reform. "I therefore see the frenzied speed at which Minister Mikolaj is preparing for the launch of reform in September as very dangerous," Humajová stressed.

Concluding, Humajová told The Slovak Spectator that education reform was inevitable for Slovakia. The main goal of reform should be a better educated generation. "Of course, this is the main goal. But it can be achieved only by changing the system," Humajová stressed.

"Our education system is burned out, and the central administration fails when coordinating individual segments," she said.