Sailing against the current

SLOVAKIA is a landlocked country with minimal access to large bodies of water, but that does not mean that its people cannot excel at water sports. Windsurfer Patrik Pollák, the 2006 world champion in raceboard and one of the Slovak athletes who has already qualified for the Olympic Games, proves this. 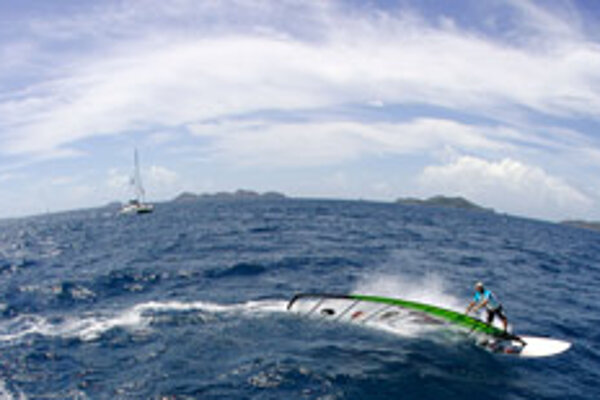 You don't get waves like this in Slovakia: Patrik Pollák wants to test the waters closer to Beijing. (Source: Courtesy of Patrik Pollák)
Font size:A-|A+

SLOVAKIA is a landlocked country with minimal access to large bodies of water, but that does not mean that its people cannot excel at water sports. Windsurfer Patrik Pollák, the 2006 world champion in raceboard and one of the Slovak athletes who has already qualified for the Olympic Games, proves this.

Pollák will be the only Slovak to compete in sailing at the Summer Olympics in Beijing this year.

"No other Slovak athlete has a chance to qualify for the games in sailing," Ľubomír Souček from the Slovak Olympic Committee told The Slovak Spectator. "The qualification process in this category is already closed."

Pollák earned a ticket to the Games at the World Championships held in Auckland, New Zealand, in January 2008.

However, preparations for his Olympic attendance have not been smooth sailing. In mid-February, a short circuit in the wiring of his mobile home caused a fire which destroyed the van's interior, rendering it unusable. Pollák used the van to travel to competitions and training venues, and lived in it during these stays.

"Right now, this is a serious problem, but I am trying to find a solution so that I can continue training as planned," Pollák told The Slovak Spectator.

"During Easter I planned to attend my first race abroad, and beginning in April there is a series of World Cups and the European Championships. In June I would like to go to test the water where the Games will take place. Final preparations should be finished by July, and then I should fine-tune my form in Slovakia or, if conditions make that impossible, on nearby bodies of water."

"This was the original plan. But I will see whether I can get another van and how far organisations, sponsors and the Slovak Olympic Committee will fulfil their promises to support this venture," said Pollák. "The van is only one of the factors that should be addressed in order to bring my training up to the level of my competitors'. Training sessions with proper support, such as a coach, a motorboat on the water and physiotherapy is something I can only dream of for now," Pollák told The Slovak Spectator, reflecting on the less than ideal state of Slovak sailing.

"Experience from previous Games and other races is useful, but in the end it is all about how the athlete prepares for the current Games," Pollák told The Slovak Spectator. "The Olympics are a very specific race because all the athletes begin at the starting line with the same chances."

"Nevertheless, I think that my prior experience may help me. There is a proverb that sailors go to win only at the third or the fourth Games. The idea is that sailors don't perform at peak levels the first time they participate in the Olympics."

In China, Pollák, the 2006 World Champion in Raceboard and the 2007 bronze winner, will compete in the RS:X class, which replaces the Mistral class at the Olympics for the first time this year.

"The difference between Raceboard and RS:X is that the Olympic class uses the "one design" board, and the racers must not change it in any significant way," Pollák told The Slovak Spectator. "This means that racers will use a monotype. Everyone will have the same sailboard and the same sail.

"Such equipment may suit one racer's physique more than another's. In the Raceboard class only the size of the sailboard is limited, and the sailor can adjust the width, length and other characteristics to suit his taste, or according to the weather or venue. Some boards are better in a light wind and there are boards which run better in a heavy wind. This allows the sailor to use his experience from previous years of surfing."

In the Olympic class, in which the equipment is standardised, the racers have to adjust their sailing techniques accordingly.

Sailing at the 2008 Summer Olympics will be held in Qingdao from August 9 to 21.

For now, Pollák's knowledge of local water conditions there is entirely second-hand, gleaned from conversations with friends and acquaintances.

"I know that the conditions will be demanding, because it is very hot there, the wind is quite light and water currents are strong," Pollák told The Slovak Spectator. "So it is important to go there to test the water, even though in the end everything might be completely different on the day of the race, because it is impossible to predict the weather. But there is a significant chance that this will be a light-wind race."

In June Pollák plans to go to Qingdao International Marina, where the Polish team will be training.

"For me this is the only chance to compare myself with the best on the water," said Pollák.

Windsurfing is no longer all the rage

"Windsurfing is not a mainstream sport in Slovakia," said Pollák, whose father encouraged him to go into yachting. "Windsurfing was significantly more popular in the 1990s than it is today. Now, only about 40 racers attend competitions such as the Slovak Cup and the Championship of Slovakia, most from eastern Slovakia, as windsurfing racing is not so popular in the west of the country as it used to be."

Pollák cites increasing costs as one of the reasons behind this decline.

"It is because in order to compete with world champions, top racers must have world-class equipment," he said. "In the 1990s most people made their rigs at home and the difference in equipment was not so great as it is now."

One can only hope that hard-working Patrik Pollák, determined to overcome obstacles on his way to great achievements, will serve as an example to others, and that Slovak windsurfing will not disappear from the Olympic map in the future.