A note about New Solo Mime

In New Solo Mime, Milan Sládek returns to his roots as a mime. 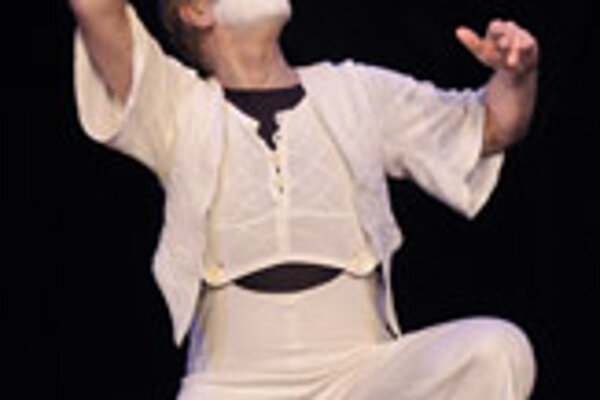 In New Solo Mime, Milan Sládek returns to his roots as a mime.

"New Solo Mime reflects on the influences in my life," Sládek said while introducing his latest project. "It is a combination of Asian theatre, opera, ballet and Pierrot, among others. The scenes are not necessarily in chronological order, but they do represent points in my life that I became connected to certain theatrical genres."

At the Bratislava reprise of this work on March 1 the scenes began with a Prologue that recalls Roman masque theatre.

"In Ancient Rome, mime and mimic dance were immensely popular," Sládek said while explaining the roots of his art. "They were as popular as the Beatles or the Rolling Stones are today."

Quasi Requiem was a more serious scene that demonstrated Sládek's thoughts on the passage of time.

"Originally I did not want to include The Sunflower into these scenes," Sládek said about the next piece. "But then I realised that this piece has been with me all my life."

The scene was about a fragile flower that dies in a bomb attack. It dates back to the very beginning of Sládek's career, but is periodically reinvented.

Another of the scenes, Pierrot and His Loves, is "a declaration of love to Pierrot, who I've never interpreted as a romantic rival of Harlequin,"Sládek said.

Cho-Cho-San, a scene that refers to the main character from the opera Madama Butterfly, reflects Sládek's interaction with Asian theatre.

"When searching for information about mime and physical expression, I could not avoid Kabuki, the traditional Japanese theatre. Even though Kabuki is not pure mime, the stylisation and composition of the actors' bodies and their incredibly accurate gestures excited me. It was also this scene that allowed me to take on a woman's role, which I like to do very much."

Sládek said his parody of the classic ballet Swan Lake "was always a bonus to the main programme. I said that it can't be left off this time."

The scene Butoh was Sládek's reflection on the modern form of Japanese dance, as well as a communication of his inspiration and enthusiasm over dancer Kazuo Ohno.

The final scene was Ledas and Swans, which is inspired by Greek mythology. Sládek performed it at the Roman mosaic in Cologne, where Roman mimes used to perform.

At the end, the audience showered Sládek with a standing ovation. The scenes showed his many facets and his versatility as an artist.

Since the start of his career in late 1950s, Sládek has produced over 45 shows, which include solo and group projects, operas and programmes for children. He has also founded two permanent mime theatres, the Kefka Theatre in Cologne (1974-1987) and the Aréna Theatre in Bratislava (1994-2002).

The acclaimed mime's website shows that his list of accomplishments will be even longer. He is already working on two new pieces: Magic Night, to be performed in July 2008, and The Stations of the Cross by Marcel Dupré, which should premiere in April 2009.