CZECH and Slovak spelunkers made an important discovery during a recent expedition to Mexico - the complete skeleton of a huge prehistoric tiger. 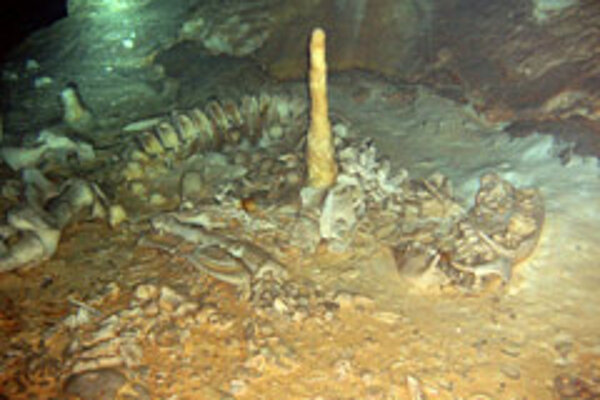 CZECH and Slovak spelunkers made an important discovery during a recent expedition to Mexico - the complete skeleton of a huge prehistoric tiger.

The skeleton was found in a system of caves on the Yucatan Peninsula called K'oox Baal. It came from a four-metre-long carnivorous beast that lived about 20,000 years ago, the ČTK newswire wrote, quoting Zdeněk Motyčka, a member of the expedition and chairman of the Czech Spelaeologic Society.

The spelunkers have been exploring K'oox Baal for six years, and have discovered that it is almost 20 kilometres long, which ranks it among the longest underwater caves in the world.

The skeleton was covered with tufa, a kind of porous limestone rock formation, which protected the bones of the impressive beast from damage and decay.

"This is the single most complete and best-preserved skeleton ever found in a Yucatan cave," Motyčka said.

Czech and Slovak explorers have discovered almost 40 kilometres of new passages in the underwater caves, which are called cenotes.

Navigating in cenotes can be difficult, requiring special diving equipment including underwater scooters and lead rope to mark the way back. But K'oox Baal has several entrances, which makes exploring easier.

The longest known underwater cave in the world is the 53 kilometre-long Sac Actun, also located on the Yucatan peninsula.