JURAJ Mác, a mild, fast-talking man in his late 30s, is the driving force behind Metalurg. He grew up in a middle-class family in a housing project in the Karlová Ves suburb of Bratislava, the son of a pharmaceutical employee and a water and sewers official. Even while in school, he says, he always had odd jobs to earn money on the side, from a paper route, to stocking shelves in the country’s first privately-owned grocery store, to cleaning wagons in a brick works. 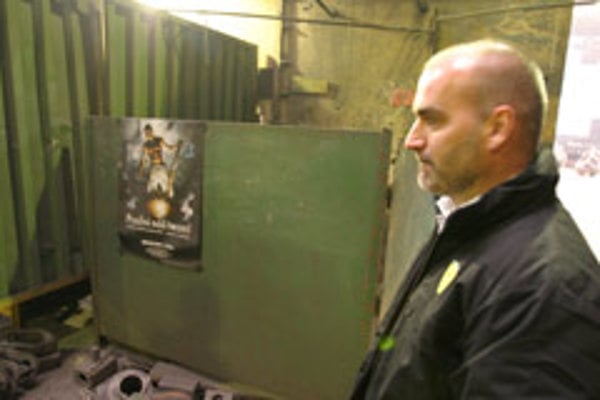 Mác says if he can turn his factory around, others can as well.
Font size:A-|A+0

JURAJ Mác, a mild, fast-talking man in his late 30s, is the driving force behind Metalurg. He grew up in a middle-class family in a housing project in the Karlová Ves suburb of Bratislava, the son of a pharmaceutical employee and a water and sewers official. Even while in school, he says, he always had odd jobs to earn money on the side, from a paper route, to stocking shelves in the country’s first privately-owned grocery store, to cleaning wagons in a brick works.

“At the time of the revolution, I was in my fourth year of university, studying radio electronics. I was also working as a croupier at a casino in the old Forum Hotel. Most of us were just ambitious university students trying to improve ourselves. We made a lot in tips, and I was earning Sk17,000 a month at a time when my father was making Sk7,000-8,000.”

Mác got married in his fifth year of university, and once he had completed his thesis, set up in business, “to see what I could make of myself”. He brought the Osram lighting brand, a subsidiary of Siemens, from Germany to Slovakia, and started distributing lighting systems. “There was no network here, so I went to Germany and brought the lights back by truck,” he said. “I soon got into more sophisticated lighting for theaters, streetlighting, car lights and so on. I then expanded the business to include electrical goods such as switches and cables, and won a contract from the Slovnaft refinery and other big companies to supply them.”

His big break came in 1998, when he started an Internet-based business selling scratch-and-win tickets. The enterprise lasted for about a week until it was closed down by Telenor, the Internet provider Mác was using. Interestingly, the head of Telenor at the time was Ján Počiatek, currently Slovakia’s finance minister. Telenor argued that the mails Mác was sending were spam, but unfortunately for the Norwegian provider, its contract with Mác did not allow it to take him off the web. “We settled with them out of court, which gave me a certain amount of capital to invest,” Mác said. “I started buying companies that were in bankruptcy and then selling them, such as a factory in Zlaté Klasy, or another one in Trnava, which we sold as warehouse space for McDonald’s and Danone.”

In 2000, Mác paired up with two Bratislava investors, Roman Brutenič and Stanislav Drgoň, and a group in investors from Dubnica to buy Metalurg from the state for Sk90 million. “Brutenič remains a silent partner, but Drgoň left the project because it was too complicated and time-consuming for him,” Mác said. “I don’t know how many people are hidden behind the Dubnica group, because at the time there were people from the senior management of the DMD Holding and ZŤS [weapons traders], and I never knew all their names.”

He says his business edge is his willingness to learn new things. With no background in steel, Mác now talks confidently about his factory, the new machines he wants to buy, and improvements he plans to make in the production process. “I’ve always enjoyed learning something new,” he said. “It took me about three years to understand this factory, for example. And that taught me something. I’m still not convinced that the decision taken by President Havel to convert from arms production was the reason these factories crashed. I think it’s more that the wrong people were assigned to lead them, political nominees who were more interested in doing their own personal deals than in developing the company. After all, if I can turn this factory around, and bring in 70% of our new clients on my own, when I have no background in the industry and an education in radio, then I don’t see why they couldn’t have done the same.”