A century ago, Bratislava was a multicultural city where you were more likely to hear German or Hungarian on the streets than Slovak. Now that the last borders separating them from the rest of Europe have been raised, the residents of the Slovak capital are reasserting themselves as citizens of Central Europe – in part by buying up Austrian real estate. 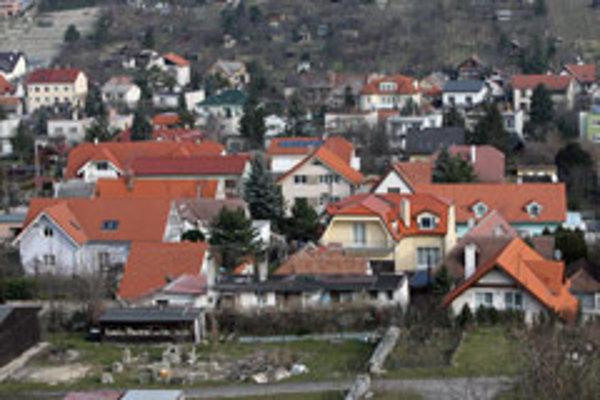 A century ago, Bratislava was a multicultural city where you were more likely to hear German or Hungarian on the streets than Slovak. Now that the last borders separating them from the rest of Europe have been raised, the residents of the Slovak capital are reasserting themselves as citizens of Central Europe – in part by buying up Austrian real estate.

Bratislavans started buying land in Austria years ago, but Slovakia’s entry to the European Union in 2004, as well as the end of border controls with the Schengen Zone accession last December, has removed the last legal, financial and psychological barriers to “moving abroad”. Within five years, Austrian towns and villages within easy driving distance of Bratislava – including Berg, Wolfsthal, Hainburg, Prellenkirche, Pama and Bad Deutsch Altenburg – expect to see the ratio of Slovaks among their residents rise to 20%.

The reasons that Austria is attracting Slovak buyers vary from the cheaper price of land and dwellings to Austria’s more advanced infrastructure, and the cultural and linguistic advantages of living in a foreign country.

“The Slovaks moving here are educated people,” said Gerhard Schödinger, the mayor of Wolfstahl (pop. 1,500). “They don’t just come here to sleep for the night – they come to live, to join our soccer teams, to play music in our bands, and to put their children in our schools.”

Monika Haklova, owner of the Bratislava-based Universal Development realtor, said that the opening of the border on December 21 last year released a tide of Slovak interest in Austrian building lots and homes. “Slovaks like the fact that real estate prices are about half of what they are [around Bratislava] on the Slovak side of the border, and they also appreciate how easy it is in Austria to get a building permit. They’re not used to a system that works so smoothly.”

Real estate prices in Slovakia continue to rise quickly – by 40% in Košice in 2007, for example, while in some parts of Bratislava they have more than doubled in the past three years. In Austria they have grown more slowly, partly because for Austrians, properties in these lands closest to the former Iron Curtain have never been greatly in demand.

Haklova reported that the price of building lots in Lower Austria has risen since the beginning of the year from 49 euros per square meter to 69, with further increases expected. However, that is still well below rates in outlying Bratislava suburbs such as Rusovce, Jarovce or Devín, where buyers commonly pay up to 150 euros.

“Interest in Austrian real estate has risen rapidly,” said Richard Churý of the Re/Max Slovensko real estate agency. “Some people are even buying plots of land as speculative investments, in the expectation that the price will rise rapidly.”

The Bauen & Wohnen Wohnbau developer, which has projects all around Austria, recently launched a development in Hainburg to take advantage of the rising demand from Slovakia. Most of the 19 row-houses have been sold, half to Slovaks.

Slovak citizen Michal Vittek bought a flat in Hainburg, about 10 kilometers from the Slovak border and 15 from downtown Bratislava, last September. He says he was attracted by the relatively low price of real estate, and added that the opening of the border – which eliminated the regular half-hour wait – was “the cherry on the cake”.

“The fact you don’t have to wait half an hour each way at the border makes living in Austria that much more of an attractive proposition,” he said.

Asked if he hadn’t been put off by the prospect of getting used to a new culture, language and legal system, Vittek said that for him, like for many Bratislavans, Austria was a known quantity. “I used to live in Vienna, so I’ve always had some contact with the country.”

Michaele Gansterer, a Hainburg town councilor, said that the Slovaks moving there appreciated the social infrastructure that the town offered. “Hainburg is a typical small town with an infrastructure geared towards young families. We’ve expanded our network of nursery schools, and for young mothers who want to start working again, we offer subsidized child care from the age of two onwards.”

So how do the Austrians feel about their new next-door neighbors? Wolfstahl mayor Schödinger said that Slovaks now make up about 10-15% of the population of his village, which is only three kilometers from the border. “It started in 2003 or 2004, but it’s been very strong for the past few years,” he said of the influx.

“A few people are skeptical, but the people who are moving here are the same as us – they are Catholics, they come from the same kind of culture, so we don’t see any difference.”

Schödinger admitted he could be biased: He has a Slovak wife, and speaks the language fluently.

Haklova agreed the locals were welcoming of the newcomers – up to a point. “These are villages, so they’re happy to be getting new blood, but I also think they’re a little wary of this becoming another Slovakia.”

Gansterer from Hainburg said that the Slovaks were being absorbed quickly into the local Austrian communities. “Many villages and towns here are preparing zoning plans with this influx in mind so that the rural character of the region is preserved,” she said. “But a lot of these families are not purely ‘Slovak’ – over time they are becoming mixed, and the families of some mayors are an excellent example of this trend.”