It’s difficult to keep up with Bratislava’s restaurant openings. Fond old faces regularly disappear in a cloud of construction dust to emerge in unfamiliar garb. New arrivals crowd converted office buildings or renovated Old Town memorials. Five or ten years are enough to qualify a business here as “established”, or to lend its cuisine “tradition”. 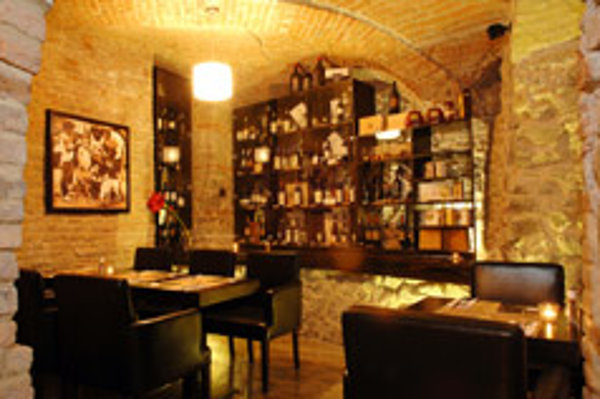 El Gaucho is another concept restaurant whose owner, Nathan Himi, has tried to teach wait staff to be less stiff and formal with the quests. (Source: Courtesy el Guacho)
Font size:A-|A+

It’s difficult to keep up with Bratislava’s restaurant openings. Fond old faces regularly disappear in a cloud of construction dust to emerge in unfamiliar garb. New arrivals crowd converted office buildings or renovated Old Town memorials. Five or ten years are enough to qualify a business here as “established”, or to lend its cuisine “tradition”.

It’s become a diner’s market, a far cry from even a decade ago when a club sandwich and a Guinness at the Irish Pub was a close as you could get to a Western restaurant experience. Nowadays, drawn by the city’s relative wealth and its residents’ spendthrift ways, restaurants that offer English menus, decent service, charming ambience and excellent food are the norm rather than the exception.

But for the entrepreneurs themselves, the restaurant business is becoming an increasingly tough one, especially because the pie is not getting any bigger.

“Tourism has taken a real plunge,” said Charles Sebesta, the co-owner of the Mezzo Mezzo and Tempus Fugit restaurants in the downtown core. “We’ve noticed it, the hotels have noticed it, and I would bet the bars and restaurants and small tourist shops have as well.”

If anything can be said of the diverse restaurant market in the Slovak capital, it is that eateries that don’t offer “something extra” – whether live music, an ethnic theme, or the novelty of having just opened – are suffering from the increasing competition.

Malecón is an example of the new type of concept dining in Bratislava. Located opposite the historic Reduta building near the Danube River, by day it is a relaxed environment suited to casual business lunches, while by night it is a Cuban hotspot complete with great food, authentic live music and dancing.

Co-owner Tono Matulčík, 33, who opened the restaurant in August 2005, said that he and his partners find live acts in Cuba and bring them to Slovakia for 18 months at a time, paying their transport, accommodation, board and visa costs as well as a salary and any fees due to Cuban booking agencies. The band plays six nights a week.

“It fits our concept,” he said of the live music. “We wanted to be authentic, and to provide good food and drink along with music and dancing.” Apart from Cuba, Matulčík visits other Latin American countries in search of culinary and cultural inspiration, most recently Mexico in January. He also co-owns the new Tapas restaurant on Laurinská Street.

The El Gaucho steakhouse on Hviezdoslavovo Square, opposite the Danube Hotel and opened in November 2006, is another restaurant that employs a concept to attract guests. Owner Nathan Himi describes the menu as “simple food that people can recognize on their plates”; it’s a formula that the El Gaucho franchise has used in over 20 restaurants around Europe and Israel since its founding in 1982. To complement the food, Himi has tried to create a relaxed atmosphere, even down to counseling his wait staff to be less formal in their approach to guests.

“I don’t want them to stand there like soldiers, I want them to put their hands on the table, to be friendly, to try to break the ice,” he said. “I also built a bar in the front where the guests come in, so they can sit and have a drink before or after they dine. That’s not so common in Slovakia, and I think it really contributes to the atmosphere.”

Over the past several years, several other concept restaurants have opened in Bratislava to enormous critical acclaim, if not always huge crowds, including the UFO revolving restaurant perched atop the New Bridge, and the Alizé – an ‘elite restaurant for an elite clientele’, according to the Trend restaurant review guide – near Michael’s Gate in the Old Town.

“Gastronomy is an art, and to be successful, you’ve got to have a project, a vision,” said Daniel Čečetka, owner and operator of UFO, as well as the more “established” Peoples and Paparazzi restaurants downtown. “It’s not enough to bang a few boards together and open the doors.”

A decade ago, extortion and other forms of thuggery by organized crime in the Slovak capital made life difficult for restaurant owners. “It’s the same in any country, whenever you have a change in the regime, it’s followed by a certain amount of chaos and unpleasantness,” said Čečetka. “We had no ambition to open anything during the 1990s, when it was most acute and when these groups were presenting themselves very openly. But [by 2000], it was already on the downturn.”

Now, some of those early criminals have ended up owning the same establishments they used to extort, while other entrepreneurs who made their “killing” elsewhere have opened restaurants as vanity projects, indifferent to whether they make a profit. Both trends present new challenges, as they draw business from more sincere operations.

Matulčík of Malecón is the real thing, a restaurant entrepreneur who never wanted to do anything different. “As far back as I can remember, I wanted to have a restaurant, even when it wasn’t politically possible,” he said, referring obliquely to the extortion-ridden restaurant scene in mid-90s Bratislava.

“While I was in Australia on a study exchange in 1997, I worked in restaurants, doing everything from washing dishes to catering and supervising. I experienced Greek and Italian restaurants, and I saw how it could work. I came to understand that servers and cooks are artists in their own way, whereas in Slovakia we were accustomed to thinking that anyone could be a waiter, that it was a job for people who couldn’t find anything else.”

To open Malecón, Matulčík and one of his other business partners put up their flats as collateral. Their wholehearted commitment to their business – Matulčík is there every day – stands out in Bratislava, where the owners of many new establishments are merely looking for a club where they can entertain their friends, rather than a viable business.

“It’s about social status, being able to invite people back to your restaurant and say: ‘this is mine’,” said Matulčík.

“You have owners ranging from money launderers to those looking for representative corporate premises to serious investors and professional restaurateurs,” agreed Čečetka. “The group of people who are doing it as a real business is quite small.”

Sebesta of Mezzo is another who invested his life’s savings into his restaurant business, along with his wife Maria. They opened Mezzo Mezzo in early 2002, and Tempus Fugit later that same year. Sebesta says customer numbers have changed little over the last few years, leaving their operation barely profitable.

“Even if these establishments [that are not serious about turning a profit] have only five or ten customers a night, collectively it still leaves less for the rest of us,” Sebesta said.

Himi of El Gaucho was a late-comer to the restaurant business, having run first the Himi Jeans and then the Kenvelo clothing network with his brother starting in 1991. When they sold up in 2005, they had 280 stores in the Czech and Slovak republics. “The franchise just took off and stores opened almost on their own,” he said.

With their partnership dissolved, Himi, who has a Slovak wife, decided to settle in Slovakia for good. He saw a business opportunity in the restaurant market, where, he said, there were not enough businesses offering “simple, fast food”.

“There are lots of things still missing on this market,” he said. “There are too many fancy restaurants, for one thing, and not enough places offering quality, fast food at a good price.”

However, with an initial investment of Sk12-13 million, El Gaucho is anything but a vanity project. “We’re full just about every night,” Himi said. “It’s really met our expectations.”

Following bumper years from 2004-2006, when tourists appear to have been drawn for a closer look at one of the European Union’s new members, visits to Bratislava declined in 2007. Igor Kuhn, manager of the Bratislava Hotel Association, said that while the city had spent millions on renovating the downtown core, it lacked the promotional drive to attract tourists.

Sebesta agreed, recalling a recent tourism fair in Vienna that had been ignored by Slovak state tourism officials. “If the Slovak tourist board cannot be bothered to drive 30 minutes to a show in Vienna – if nobody here thinks two million relatively wealthy Austrians living in Vienna are worth attracting – then tourism in this country is dead,” he said.

“There’s just no excuse for it. Three years ago, people were starting to come, you could feel the growth. But tourism being what it is, you’re only as good as your last ad, and these people haven’t understood this.”

Sebesta said that not only were the numbers of visitors down, but the time people spent in Bratislava was also growing shorter. “A few years ago they might come by car and spend a couple of nights here, now they’re bussed in and they try to do Bratislava in three or four hours. At most, they may stop in for a coffee and a mineral water. That’s not tourism.”

Himi agreed. “Bratislava is a transfer point between Budapest, Vienna and Prague,” he said. “It doesn’t have as many memorials as these cities, and people come here more for business than for tourism.”

But even the business dynamic is changing. While the economy is growing at almost 10% a year, buoyed by billions of crowns in foreign investment, the restaurant sector is in a different cycle. “From 2004-2005 we had teams of investors coming here looking at greenfield sites, a process that could take a year and wind up with each team accounting for 300-500 hotel nights and hundreds of restaurant meals,” Sebesta said. “Now that these investments are in place and producing, they are being run by Slovaks, with expat managers coming maybe once a month to see how they are doing. Multiply this by the number of recent foreign investors in this country, and you have a major impact.”

Consumers to the rescue?

If there is a bright spot in the restaurant market, it is that Slovak consumers are making up an increasingly large share of restaurant goers, and tend to spend more freely than other cultures.

Matulčík said that Malecón’s clientele was now 60-70% Slovak, a figure also quoted by Himi of El Gaucho. “Prague may have a lot more tourists, but here people tend to spend more on things like fancy cars, exotic vacations and good food,” Matulčík said. “It’s part of our national character.

But even the nation’s spendthrift ways may not be immune to change. Sebesta noted that the easy availability of mortgages over the past few years was turning increasingly more Slovaks from spenders into savers.

“Slovaks are learning to manage mortgages, and those monthly payments are eating up their available capital,” he said. “Even though the economy is doing well, this isn’t always reflected in the amount of money people spend in restaurants.”