AFTER spending time last fall in Spain’s Andalusia region – where tapas are as ubiquitous as cabbage in Slovak cuisine – I was eager to compare the food there with Rambla, Bratislava’s new tapas bar and restaurant. 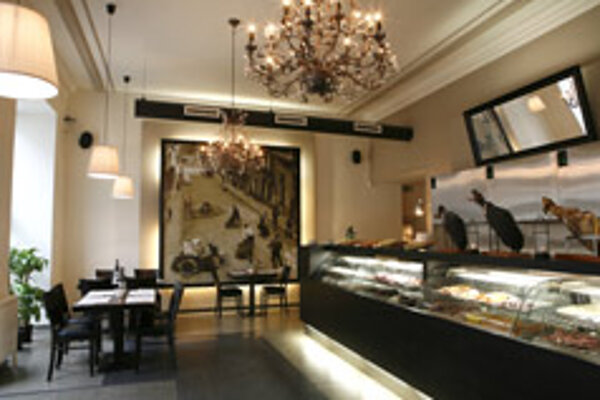 AFTER spending time last fall in Spain’s Andalusia region – where tapas are as ubiquitous as cabbage in Slovak cuisine – I was eager to compare the food there with Rambla, Bratislava’s new tapas bar and restaurant.

Rambla’s location on Michalská Street made me hesitant at first. A stone’s throw from Michael’s Gate, it’s sandwiched between luxury cosmetics and designer clothing shops, which led me to suspect it might offer more in the way of style than substance. I ended up pleasantly surprised.

The first thing I noticed was the intimate front section near the door, with its large black-and-white photographs that transport you to 1930s Spain, and soft bossa nova playing overhead. In the middle of the room is a large display case that offers jámon serrano (cured Spanish ham), a wide variety of salad and grilled vegetables, meats ready for grilling and seafood. Many of the waiters were Spanish.

The menu at Rambla is perfectly suited to both full-course meals and small samples of Spanish cuisine. It begins with tapas – individual servings of meat, vegetables, or seafood that the Andalusians consume while drinking sherry.

The meatballs with tomato sauce (Sk130) were four soft and salty treats spiced with a dash of oregano. The tortilla (Spanish omelet, Sk90) was less impressive - two small slices of potato and egg which were decidedly on the dry and tasteless side. But the whole grilled red pepper stuffed with crumbly feta cheese and basil and drizzled with a light and fragrant olive oil (Sk120), and the fried eggplant encased in a crispy crust and smothered in a light tomato sauce (Sk80) more than made up for the tortilla.

Added to the warm, chewy pita bread and creamy hummus that came on the house and a glass of romarin port (Sk80 for two decilitres), I felt satisfyingly full. But I wanted a more complete taste of the menu, so my companion and I forged on, ordering the beef kebab skewer (Sk190), vegetable skewer (Sk70) and a side of potatoes roasted with garlic and rosemary (Sk80).

The beef kebab was melt-in-your-mouth tender, lightly crisped on the outside, pink on the inside, and exceptionally flavourful. The vegetable skewer came with grilled slices of zucchini, tomato, hot and sweet peppers, and onion in a light barbecue sauce that was the best I’ve tasted since Texas. The potatoes were slightly dry, but the rosemary was fresh and complemented the meat well. All were made even more enjoyable by harissa (Sk50), a red spicy sauce with a slight kick.

The meal wrapped up with two uninspired desserts served in small individual cups: cheesecake with mango and kiwi (Sk120) and mascarpone with strawberries (Sk120).

When I told the waiter that I suspected the mascarpone might not be fresh, he checked with the chef, who said it was fine.

I appreciated that level of pride in the food, as well as the attentive service I experienced the entire evening. The staff, including the manager, checked on us often and demonstrated knowledge of the menu in English and Slovak.

Considering its location and food that tastes better than tapas in Andalusia, Rambla distinguishes itself with excellent service and reasonable prices. n