One of the most famous Slovak Jews of all time was Josef Chaim Sonnenfeld, who was born in 1848 in Vrbové, near Piešťany in Western Slovakia. In the 1870’s he moved to Jerusalem, where in the 1920’s he became the city’s chief rabbi. 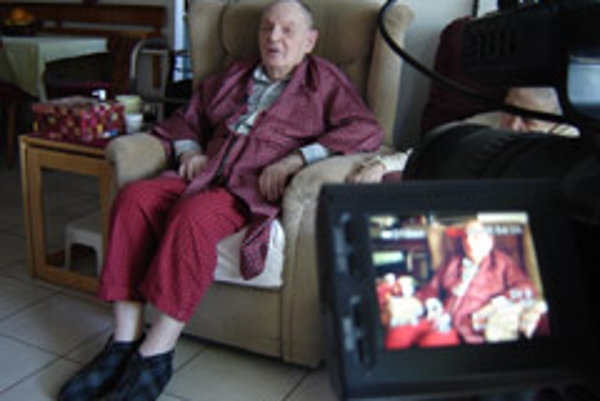 One of the most famous Slovak Jews of all time was Josef Chaim Sonnenfeld, who was born in 1848 in Vrbové, near Piešťany in Western Slovakia. In the 1870’s he moved to Jerusalem, where in the 1920’s he became the city’s chief rabbi.

Sonnenfeld is no longer around to tell his own story, but the Slovak Jewish diaspora has carried his relatives around the world.

“It’s amazing how a family can be spread all over, how cousins can be living in different countries, following different lifestyles, but still feel connected,” wrote Shlomi Einhorn from Israel.

Einhorn was responding to a story about Sonnenfeld that appeared in SPEX in March 2007, detailing the former Jerusalem chief rabbi’s Slovak roots; roots that Sonnenfeld’s descendants said they had no knowledge of. Our reunion had been prompted by my discovery that my grandfather, Emil Sonnenfeld of Vrbové, was related to Jozef Chaim Sonnenfeld.

One of Sonnenfeld’s oldest living relatives was Heinz Jakob Tauber, a writer and doctor who was born in Skalica but who lived the second half of his life in Israel. Tauber’s grandfather was Sonnenfeld’s half-brother.

And so we set off for Haifa to meet Tauber, who turned 90 in August 2007. We visited his home on a warm November morning. Tauber sat in an armchair next to his wife. He was having problems with his eyesight, and had difficulty moving as the result of a stroke. However, he welcomed us with great interest, and answered our questions for several hours without tiring.

His wife did not seem to take us in – she had an advanced form of Alzheimer’s, and sat silently beside her husband, her head back and her eyes closed. Her face wore a distracted expression, but beneath its yellowish skin, her noble, gentle countenance could be still seen. Her husband held her hand the whole time.

“I can tell from her hand what she feels. If she resists my palm, she considers me a stranger. If her hand succumbs to mine, she knows that it’s me, that I’m with her,” he said. “But this isn’t her. She’s far away.”

Apart from Atlantis of the Holíč Jews (Atlantída holíčskych Židov), Heinz Jakob Tauber also wrote My Friend Monty (Můj přítel Monty). In the Atlantis book, the world of the Jews of Holíč, a town beside Skalica in Western Slovakia, is revived in its pre-Second World War vibrance.

“A cemetery has a magic that is unrivalled in this world,” he wrote in Atlantis. “In this noisy world it is a place where peace reigns, real peace, and silence heals troubled ears…”

“If there is something that can evoke my nostalgia, then it is this period,” Tauber said of his days in Holíč.

In Monty, his second book of memories, he describes his wartime army experiences.

Was he proud of having written two such exceptional books? “I don’t know,” he answered. “There is nothing about the end of life that a man can enjoy and like.”

When I reminded him that his two books had captured a piece of Slovakia’s history, Tauber nodded. “They did indeed. I hope God and literature will forgive me for it.”

Tauber never knew Sonnenfeld well. “I just used to get letters from him. One came when I had my Bar Mitzvah. He wrote me to be a good person, not to argue with anyone – all of which were things I tried to do later. But at the time, I was an arguer. I was not a good person.”

Tauber left Holíč in 1935 to study medicine in Bratislava. After the war broke out in 1939, he worked in the Jewish Central Office as a clerk. At the office, a registry of young Jewish women between the ages of 18 and 30 was created. Tauber learned that the registry was designed to list women who were intended for the brothels, so he burned the records. The head of the Jewish Central Office warned him that if he didn’t disappear within 24 hours, he would be forced to tell the police what had happened and who had done it.

“Well, I didn’t want that, so I asked him to give me two days. He did, and he even helped me get a passport,” Tauber said.

The passport took him first to Hungary and then to Palestine, where he arrived on May 1, 1941. He married, and soon had a daughter, Judka, who was only weeks old when Tauber was recruited by the Czechoslovak foreign legion. He joined the legion in the Middle East, where it was deployed as part of the British army.

During all this time, Tauber had no reports of the Holocaust, but his parents and his sister, who had stayed in Slovakia, were sent to the concentration camps. At Auschwitz, his mother asked to be allowed to care for her sister-in-law. “My aunt was such a creature, incapable of living independently,” Tauber explained.

Witnesses later told Tauber that the infamous Auschwitz doctor, Jozef Mengele, had assigned his mother to one group of people chosen to live, and put his aunt in another group scheduled to be gassed. “Mum begged to be allowed to stay with my aunt, saying that she was an unfortunate, dependent person, and Mengele agreed,” Tauber said. “So they both went to their deaths.” His father

and sister survived the concentration camp.

After his military service, Tauber went to England, and the end of the war found him in Plzen in the Czech lands. He took up his medical studies again, with his wife joining him from Israel only weeks before his graduation.

“After my graduation, we wanted to leave Czechoslovakia, which was worth nothing, but as a young doctor I was not allowed to. So I stayed there for another 22 years,” Tauber said. He emigrated to Israel with his family in 1968 during the Prague spring.

In Israel, he worked as a doctor, writing early in the morning before he started work. The Atlantis of the Holíč Jews and My Friend Monty were published by the Czech publishing house Sefer in the autumn of his life, in 2003 and 2006, respectively.

“It’s a martyrdom to live so long,” Tauber said as we left. Two weeks later, Mrs. Tauber died. A fortnight after that, Heinz Jakob Tauber followed her.