THE RULING coalition parties remain deaf to the uproar from Slovakia’s major dailies, which printed blank front pages on March 27 in protest at the controversial draft Press Code awaiting approval by parliament. 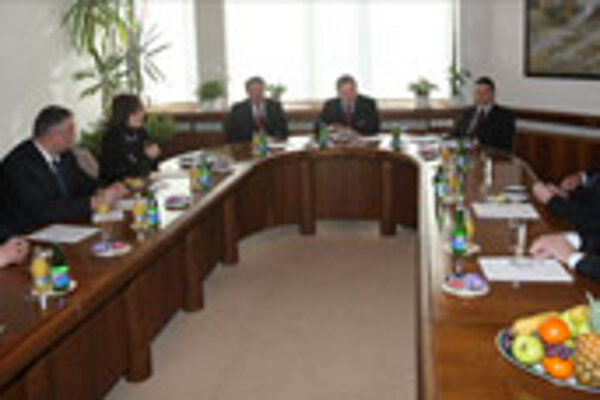 THE RULING coalition parties remain deaf to the uproar from Slovakia’s major dailies, which printed blank front pages on March 27 in protest at the controversial draft Press Code awaiting approval by parliament.

The ruling coalition maintains that it will only make “cosmetic” changes to the bill that has been massively criticised by the Organization for Security and Cooperation in Europe (OSCE).

The country’s opposition parties, which have called the bill “undemocratic”, have conditioned their approval for the Lisbon Treaty on revisions to the Press Code. However, this pressure has done little to persuade the Robert Fico government.

The Association of Publishers of Periodical Press listed their objections to the Press Code in “Seven Sins of the Press Code”, a document that ran on the otherwise blank front pages of their publications.

They argue that this results in a double sanction - the obligation to print both a correction and a reply.

The publishers warned that the draft would leave publishers open to being penalised for publishing replies that contravene law or rules on decency, and extends the right of reply to state and public institutions, which, according to international organisations, creates room for abuse.

The code also dictates that a publisher cannot refuse to print a reply without risking a Sk150,000 fine, which would be decided by the Culture Ministry.

On April 3, Prime Minister Robert Fico said that the provision of the code that gives the Culture Ministry the authority to fine the media will be omitted from the final version and transferred to the courts, which will still have the power to impose a fine of up to Sk150,000.

Fico made the statement after meeting with coalition partners the Movement for a Democratic Slovakia (HZDS) and the Slovak National Party (SNS), but took the opportunity to announce that the coalition isn’t budging any further.

“We will certainly not go beyond the frame of what I have already said,” Fico told journalists. “There is a clear agreement that the Press Code with these changes will go through the parliament.”

Parliament should hold a final vote on the code during the session that started on March 26.

According to Fico, the right to reply would eliminate “the huge inequality” between the newspapers’ influence and the lack of opportunities to respond to articles.

“Our goal is to be equally armed,” he said as quoted by the Sme daily.

The right to reply in the way the Culture Ministry has defined it is the provision of the code that has come in for the harshest criticism from observers.

Fico said that the recent revisions to the code addressed the OSCE’s concerns.

“We made a clear concession,” he said.

But Miloš Nemeček, the Chairman of the Association of Publishers of Periodical Press, said that the draft could still change as it makes its way through parliament.

Nemeček insisted that the right to reply should apply only in cases in which the media has printed erroneous information.

“This is the basic condition,” he told the press. “The media only wants to do its job, and it will do it regardless of whether someone likes it, or whether good or bad laws are passed.”

The opposition has also reaffirmed its stance that it will only vote for the ratification of the Lisbon Treaty if the elements of the Press Code that have been criticised by the OSCE are removed.

Opposition leaders Mikuláš Dzurinda of the Slovak Democratic and Christian Union (SDKÚ), Pavol Hrušovský of the Christian Democratic Movement (KDH) and Pál Csáky of the Hungarian Coalition Party (SMK) called for “democratic changes” to the bill after their April 1 meeting.

Dzurinda said the opposition is ready to negotiate.

“We have a completely different idea about the Press Code than the ruling coalition, but we do not expect all our ideas to be fully incorporated,” Dzurinda said. “The result should be a compromise.”

However, Smer spokesperson Katarína Kližanová Rýsová told the media that the ruling coalition has ruled out negotiating.

Speaker of Parliament Pavol Paška (Smer) said that after a vote on the Press Code is held, he will call for a vote on the Lisbon Treaty, regardless of the opposition’s demands.

While the ruling coalition has enough votes to pass the Press Code in its current form, it needs at least five votes from opposition MPs to pass the Lisbon Treaty, which requires approval from three fifths of parliament.

Lawyer Marek Benedik, an independent expert on the Press Code who has analysed the document for publishers, said that the requirements voiced by the Association of Publishers of Periodical Press are justified.

“There are many provisions in the bill that constitute a potential threat to the free operation of the press in a democratic society,” Benedik told The Slovak Spectator.

He said that the bill’s right to both a reply and an answer enable people to demand not only a printed correction, but also that their answer be published.

“I really do not think this is appropriate or reasonable,” he said.

No one can refuse to allow a person to protect themself against information printed in the media that disparages them, or violates their rights, he said. The right to reply gives space to the affected parties, he said.

“But protection must be appropriate and rational, which is not the case with the bill,” Benedik said.

The Press Code would comply with the recommendations of the Council of Europe if it simply kept only the right to reply, he added.

“The Council of Europe expects that countries provide people with either the right to a correction or the right to a reply,” Benedik said. “Either provides sufficient protection against abuse.”

He also said that parliament should revise the draft Press Code to make the protection of sources [used by media] a right, not a duty. Benedik said that protecting sources makes it possible for a free press to function.

According to Benedik, the bill fails to clearly define the reasons under which the publisher can refuse to print a reply or correction. He also said that a fine for failing to publish a reply should be dropped entirely.

Anyone affected by published information can already seek redress under the Slovak Civil Code, he added.