IN AN APPARENT violation of the EU’s Code of Conduct on Arms Exports, the Economy Ministry has approved a shipment of 10,000 artillery rockets to the Sri Lankan government, which is engaged in a civil war with Tamil Tiger rebels in which both sides are suspected of grave human rights abuses. 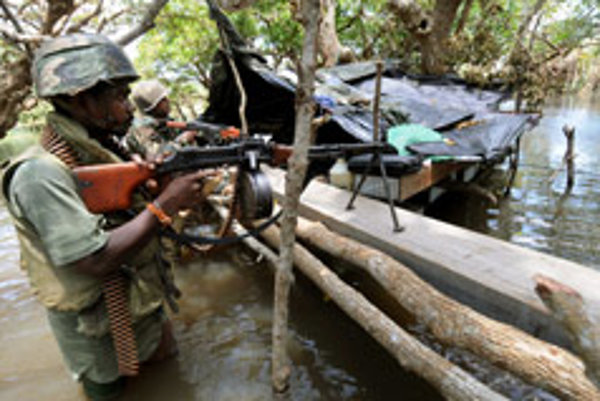 Sri Lanka has been caught in a civil war for the past 25 years. (Source: Reuters)
Font size:A-|A+  Comments disabled

IN AN APPARENT violation of the EU’s Code of Conduct on Arms Exports, the Economy Ministry has approved a shipment of 10,000 artillery rockets to the Sri Lankan government, which is engaged in a civil war with Tamil Tiger rebels in which both sides are suspected of grave human rights abuses.

According to information obtained by The Slovak Spectator, the three-metre rockets were due to be shipped from Slovakia to Croatia, from where they were to depart by boat for Colombo, the Sri Lankan capital, on April 10. The “end-user” of the weapons was listed as the Sri Lankan Armed Forces General Staff.

The Sri Lankan administration of President Mahinda Rajapaksa unilaterally abandoned a ceasefire with the Tamil Tiger rebels in January this year, and has been cited in recent US, UN and EU human rights reports for allegedly killing and kidnapping civilians in the country’s 25-year civil conflict (see related article, page 9). In March, the US-based rights group Human Rights Watch labeled the Rajapaksa government as one of the “world’s worst perpetrators of enforced disappearances”, mainly of young Tamil men.

According to the EU’s Code of Conduct on Arms Exports, Sri Lanka is the kind of destination that arms exporters in EU member states should be banned from supplying. Paragraph 2 of the Code says that “Member States will not issue an export license [for military goods] if there is a clear risk that the proposed export might be used for internal repression,” while Paragraph 3 declares that “Member States will not allow exports which would provoke or prolong armed conflicts or aggravate existing tensions in the country of final destination.”

The rockets, which are dispatched from launchers that operate in batteries of 18, can be fired in volleys of up to 720 at a time. The weapons are known more for their power than for their accuracy.

“This sale is a classic example of the weakness of the EU Code of Conduct on arms exports, which is both vague and often unenforced,” said Symon Hill of the Campaign Against Arms Trade, a UK-based watchdog. “An influx of more weapons is exactly what Sri Lanka does not need now. As in many modern wars, and civil wars especially, it is civilians who will be the likely victims.”

However, the Economy Ministry, which is responsible for vetting and issuing licenses for arms exports, and gave the rocket consignment the green light in February, said it did not violate the EU Code.

“Sri Lanka is a member of the UN and has the right to defend itself and protect its own security,” said ministry spokesman Branislav Zvara. “The UN Security Council’s evaluation of the situation in Sri Lanka has not led it to declare an embargo on arms shipments to the country.”

The Foreign Ministry, which has the power of veto on arms exports if it believes they would violate Slovakia’s international obligations or its foreign policy interests, also saw nothing wrong with the rocket deal.

“Slovakia’s export control regime is compatible with those used in EU and NATO partner countries, and in general enjoys their natural respect and recognition,” said spokesman Ján Škoda.

The 122mm rockets have a range of up to 30 kilometres, and can carry 20-kilogramme high explosive, incendiary or chemical warheads. They are fired by the Soviet-designed GRAD multiple rocket launcher, which is used in over 50 countries, making it one of the world’s most popular rocket artillery systems. The former Czechoslovakia developed a variation on the GRAD called the RM70, which the Slovak rockets in question were designed for.

The weapons were bought from the Ministry of Defence surplus stocks by the SMS arms trading company of Dubnica nad Váhom on November 24, 2006. Ministry spokesman Vladimír Gemela, who confirmed the deal, said that the sale price had been Sk8.45 million, but refused to say how many rockets had been sold or what the per-unit price was. If the deal was for 10,000 Grads, the unit price comes to about $40 a rocket.

The rockets were later purchased by Way Industry of Krupina in central Slovakia and sold to Lanka Logistics of Colombo, a state firm which since has handled arms procurement for the Sri Lankan armed forces since late last year. According to unconfirmed information, Sri Lanka paid $180 per rocket, not including transit costs.

Way Industry is more known for its exports of Božena minesweeping vehicles, which have cleared minefields for UN and NATO troops in places like Afghanistan, Iraq and the countries of the former Yugoslavia. Way director Július Mokoš did not react to request for comment on March 27, and when contacted by telephone on April 3 refused to discuss the deal in any form save a personal interview, which he was unable to provide before The Slovak Spectator went to print.

However, he denied that the deal violated any laws, and said that the Sri Lankan government had a right to defend itself against the Tamil Tiger rebels.

Christiana Hohmann, spokesperson for Benita Ferrero-Waldner, the European Commissioner for External Relations, said in a telephone interview that there were no sanctions for countries that violated the EU’s arms export code.

“How the Code is implemented is up to each member country,” she said.

Slovakia is far from the EU’s largest supplier of weapons to Sri Lanka. In 2005 and 2006, the last years for which data are available in EU consolidated reports, Slovakia exported €213,000 worth of ground vehicles and components to Sri Lanka, while the Czech Republic sent almost €4 million worth of goods in a range of military categories. During the same period the UK dispatched over €8.5 million worth of weapons to Colombo.

“Other countries - of which the UK is certainly one - have acted in ways that also appear to breach the code,” said CAAT's Hill.

• July 1983: The Liberation Tigers of Tamil Elam, a militant group representing the rights of the minority Tamil population against the majority Sinhalese, launches an attack on government soldiers in the north of Sri Lanka. This act triggers a civil war that over the next 25 years claims more than 68,000 lives.

• February 2002: Worried that the 9/11 attacks on the US might bring Washington into the Sri Lankan conflict on the side of the government, the Tamils sign a ceasefire agreement with the Colombo administration.

• August 2006: Ten civilians are killed after a shell hits a school in Muttur where they had taken refuge from fighting. These deaths are followed by other civilian massacres, including that of at least 50 teenage girls at a medical training camp by the Sri Lankan Air Force, 64 civilians on a bus shelled by the Tamil Tigers, and 61 civilians sheltering in another school. The ceasefire breaks down.

• December 2006: The UN says it is “deeply concerned” by the indiscriminate shelling of civilian areas by both Tamil Tiger rebels and the Sri Lankan army. More than 1,200 civilians have been killed since January; human rights abuses include the killing, abduction, and torture of civilians and their use as ‘human shields’, and the recruitment of child soldiers.

• January 2008: The Sri Lanka government unilaterally pulls out of the ceasefire agreement. The total number of refugees since August 2006 reaches 460,000.

• February 2008: Human rights group Amnesty International says the situation in Sri Lanka has deteriorated and that both the government and the Tamil Tigers stand accused of serious human rights abuses.

• March 2008: An international panel invited to Colombo to investigate 16 serious human rights violations by government forces leaves the country, saying the administration is not serious about tackling the issue. Human Rights Watch, a US rights group, describes Sri Lanka as “one of the world’s worst perpetrators of disappearances and abductions”. The U.S. State Department’s 2007 Country Report on Human Rights Practices in Sri Lanka, released March 13, cites government abuses including unlawful killings, abductions, arbitrary arrests and the denial of fair public trials. The European Union adds on March 18 that it has “very serious concerns” about human rights abuses in Sri Lanka following a three-day visit to the country by a panel of six.