THE LISBON Treaty was finally approved by Parliament on April 10 after months of wrangling between the coalition and opposition. 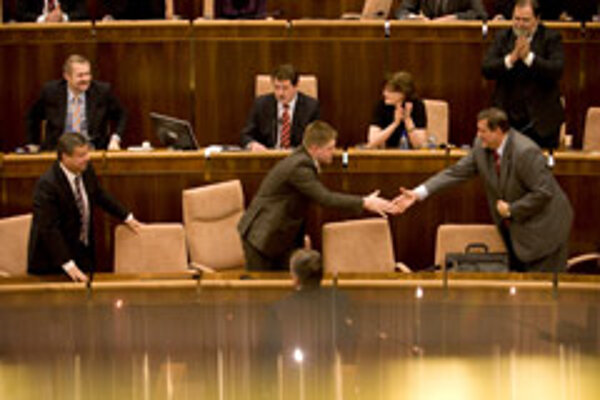 THE LISBON Treaty was finally approved by Parliament on April 10 after months of wrangling between the coalition and opposition.

The vote came hours after the Hungarian Coalition Party (SMK) announced that it was backing out of a months-long agreement with its fellow opposition parties, which had vowed not to ratify the treaty until their revisions to the coalition's controversial Press Code were accepted.

In the end, 103 of the 109 members of parliament present voted in favour of the treaty, which replaces the European Constitution that French and Dutch voters rejected two years ago. At least 90 votes were needed for it to pass.

As promised, members of the Christian Democratic Movement (KDH) and Slovak Democratic and Christian Union (SDKÚ), the latter of which had led the effort to use ratification of the treaty as a bargaining chip against the Press Code, refused to attend the vote.

SMK chairman Pál Csáky said at a press conference before the vote that his party's parliamentary committee had reached a unanimous decision to back the treaty. He justified it as support for an international document rather than a sign of warmer relations between the SMK and the coalition or Prime Minister Robert Fico.

"Robert Fico will always be a populist," Csáky said. "His policies are empty."

SDKÚ chairman Mikuláš Dzurinda and KDH chairman Pavol Hrušovský were quick to condemn the SMK. Both party leaders alleged that the SMK had sold out to the coalition in return for benefits to Slovakia's Hungarian minority.

"The SMK failed," Dzurinda declared at the press conference. "It failed in the decisive battle of this term."

Dzurinda spoke in even harsher terms after the vote.

"We had this battle in our hands," he said. "We could have won, we should have won, and that is why the consequences of the SMK's failure are so grave."

"From this day on, the ruling coalition has a constitutional majority, not just a parliamentary majority," Hrušovský warned.

But political analyst Miroslav Kusý views the SMK's support for the Lisbon Treaty as a positive development.

According to Kusý, it was clear from the beginning that the coalition was not going to make any concessions on the Press Code. Therefore, it was wrong for Dzurinda to link the fate of the Press Code with something as important as the Lisbon Treaty, Kusý reasoned.

"I think it is a fitting resolution to this stalemate, because the boycott of the Lisbon Treaty was bad from the beginning," Kusý told The Slovak Spectator.

Kusý said the passage of the Lisbon Treaty doesn't close off any options for opposing the Press Code.

And Kusý is convinced that this most recent rift between the opposition parties will quickly blow over.

"It will cause a certain uproar within the opposition, but I think that will be just for effect, for appearance's sake," he said. " It will cool down eventually."

The treaty must be ratified by all 27 EU member states to come into force as planned, in 2009. So far, it has been ratified by seven EU countries: Hungary, Slovenia, Malta, Romania, France, Bulgaria, and Austria. In Poland, it is awaiting President Lech Kaczyński's signature.