IN SLOVAKIA, the last two consecutive winters can best be described as unseasonably warm. And even though the most recent winter was colder than the previous one, many ski resorts had difficulty keeping their lifts and cable chairs in operation even in mid-winter, due to lack of snow. Only ski resorts at altitudes above 1,000 metres reported consistently good skiing conditions over the entire season, but even they had to rely heavily on snow-making machines to keep their slopes white. 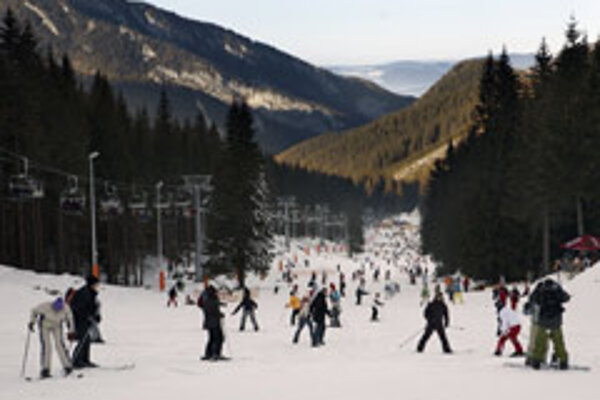 IN SLOVAKIA, the last two consecutive winters can best be described as unseasonably warm. And even though the most recent winter was colder than the previous one, many ski resorts had difficulty keeping their lifts and cable chairs in operation even in mid-winter, due to lack of snow. Only ski resorts at altitudes above 1,000 metres reported consistently good skiing conditions over the entire season, but even they had to rely heavily on snow-making machines to keep their slopes white.

Ski resorts at higher altitudes benefited from the unfavourable skiing conditions below, as skiers moved to ski centres with ample snow. As a result, ski resorts such as Donovaly and Jasná in the Low Tatras, Štrbské Pleso and Lomnické Sedlo in the High Tatras, and Martinské Hole in Malá Fatra will certainly not complain about the bad season.

The relatively warm winters have taught operators of Slovak ski resorts to respond to crisis scenarios and to diversify the services they offer.

"These two winters were the warmest winters in the last decade," Peter Miklánek, the director of the Park Snow Liptovské Revúce resort (670-1,125 metres above sea level) in the Low Tatras, told The Slovak Spectator. "From a financial point of view this weakened the return on the investments so far. A way out is to invest in snow-making facilities so effective that the resort would be able to cover all its ski slopes with snow within one week."

As a relatively low-altitude ski resort, Liptovské Revúce was quite affected by the warm winter, sometimes limiting its operation.

"However, the situation taught us to anticipate crisis scenarios," said Miklánek. "One solution might be the ability to provide relaxation services in thermal pools, or other entertainment when it rains."

"The last two winters were unusual also due to a number of extremely windy days, during which cable car chairlifts at Chopok Hill and in Lomnické Sedlo were out of order," Danka Velecká, the marketing director of Jasná ski resort and the Tatranské Lanové Dráhy (TLD) cable car operator, told The Slovak Spectator. "In December and January we reported a significant decline compared to previous "good seasons", but thanks to the increased number of tourists in February and March, the season overall was comparable with previous good seasons."

TLD reported an approximately 10-percent drop in the number of passengers compared with the previous winter. But the biggest losses were caused by the fact that in January cable cars from Tatranská Lomnica were out of order for more than two weeks due to severe winter weather conditions."

"Moreover, both ski resorts are at altitudes above 1,000 metres and thus we are not afraid of other similar winters," said Velecká. "But we do want to build cable car chairlifts that are not affected by wind. Moreover, the incomplete zoning of the TANAP nature reserve and fact that the town lacks a master plan of Tatranská Lomnica prevent further construction."

Both Jasná and Tatranská Lomnica are offering rich summer entertainment programmes aimed at attracting a steady flow of tourists year-round.

At the Park Snow Vysoké Tatry resort in the High Tatras at an altitude of 1,350 - 1,840 metres, the recent warm winters have not been problematic.

"In fact, the warm weather left us unaffected except for some nights when temperatures were only narrowly below zero," Pavel Hlávka from the ski resort told The Slovak Spectator. Under such conditions, snow-making machines are less efficient, which increased the centre's costs. "In the autumn of 2007 we enhanced our snow-making system, which brought positive results at the beginning of the winter at the Interski slope."

Since the ski resort is located at high altitude, it enjoys a huge advantage over other resorts, and thus the number of visitors increased rather than decreased, said Hlávka.

Štrbské Pleso plans to build a new chair lift and ski slope next season, which will make this resort even more attractive.

Vrátna Free Time Zone ski centre, located at altitudes 600-1,709 metres has slopes in all altitude ranges. The lower "floor" of the resort - Paseky - lies below the critical altitude of 1,000 metres.

Viera Vlžáková from the marketing department in Vrátna confirmed for The Slovak Spectator that some ski slopes in this area, for example Príslop (700-930 metres), were out of order due to high temperatures. But Paseky stayed operational thanks to snow-making.

However, Poludňový Grúň, which is a bit higher (1,000-1,300 metres), was out of operation because it does not have a snow-making system.

"All future investments associated with the winter season will be directed to higher altitudes (above 1,000 metres)," said Vlžáková. "After this winter, we are already planning to invest in snow-making equipment for Poludňový Grúň."

Like Jasná, Vrátna aims to be in full operation year-round, offering an assortment of services and activities such as a wellness centre, Nordic walking, and a chair lift which operates year-round to the ridge of the Malá Fatra mountain range.