BRATISLAVA Castle turned back the clock 63 years on April 5 as members of the Klub Vojenskej histórie (War History Club) Carpathia re-enacted its liberation in 1945, the Pravda daily reported. 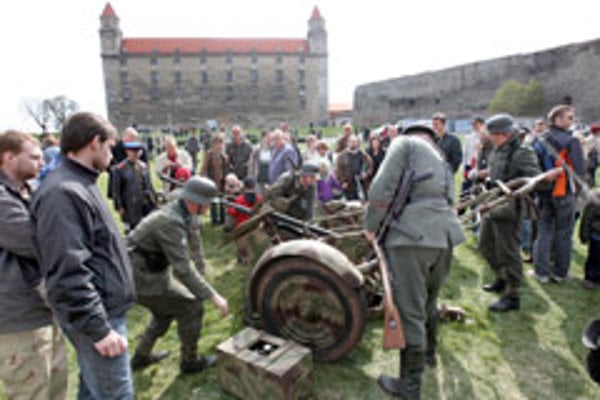 BRATISLAVA Castle turned back the clock 63 years on April 5 as members of the Klub Vojenskej histórie (War History Club) Carpathia re-enacted its liberation in 1945, the Pravda daily reported.

The real battle for the city, which ended with Soviet Red Army liberating it from the German army, took place at the beginning of April 1945. Bratislava celebrates its liberation on April 4.

Over the weekend, battle raged at the castle. From its front courtyard, Wehrmacht soldiers looked out over the Engerau housing estate - now called Petržalka - and perhaps pondered how it might have looked like had they remained in place in 1945. However, their thoughts were interrupted by Japanese tourists wanting to take a picture with the uniformed men. Red Army soldiers prepared for battle in part of the grounds from where the Old Town and Slavín - the hill-top monument commemorating the Soviet soldiers who died during the campaign of liberation - are visible.

And then the fighting started. The Germans retreated to the rear courtyard, where they had their headquarters and field hospital. Immediately, two civilians were brought in, who had been found with a weapon. The commander became judge and jury and within seconds the shots of a firing squad rang out. "Mum, are they already in prison?" a child could be heard asking his mother. "No, they have been shot dead," their mother replied, concealing nothing.

More salvos sounded from the Russian guns. A first Red Army attack was turned back by the Germans, but the second and third part of the battle went to the Russian attackers. Germans fell faster than the US dollar (according to a wag in the audience) and within a few minutes a red cloth with a small hammer and sickle was hoisted in the back courtyard.

To make the performance credible, Pravda reported, following their victory the Russians chased the blonde nurse from the German field hospital a little, then searched the "dead" bodies of the German soldiers.

"We tried to show people how it might have looked during the liberation of Bratislava," Peter Velčický of the War History Club Carpathia told Sme. "The castle used to be a strategic place." Only the uniforms in which soldier-actors performed were replicas; both the weapons and vehicles were authentic. "They come from fans and collectors," Velčický said, adding that it took several months to prepare for the event and that they rehearsed for the show about a month in advance.