VIENNA is not the only city recently conquered by Ancient Egyptians. 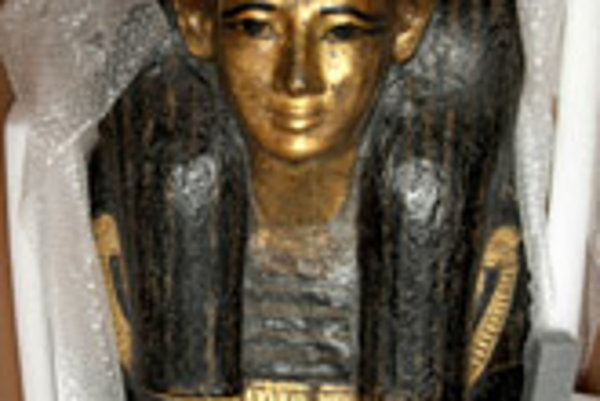 VIENNA is not the only city recently conquered by Ancient Egyptians.

As the Kunsthistorisches Museum in the Austrian capital offers an exclusive exhibition about Tutankhamun, the Slovak National Museum (SNM) in Bratislava is holding its own impressive display about the period of pharaohs.

The exhibition, entitled Thebes, the City of Gods and Pharaohs, shows the evolution of Thebes, one of the most significant cultural and religious centres of the ancient world. Visitors can view 17 panels in 13 rooms to learn more about Thebes, which is now known for the nearby Valley of the Kings. Each of the rooms presents one specific period in the city's history.

"The stress is on the period of the New Kingdom, when Thebes was at its prime," Pavel Onderka from the National Museum in Prague, a co-organiser of the exhibition, said while introducing it.

And unlike the exhibition in Vienna, the display at the SNM maps almost 4,000 years of history. It also shows what like was life for Ancient Egypt's middle class, the Pravda daily wrote.

Of the more than 200 artefacts that the SNM collected from museums in the Czech Republic, Germany and Slovakia, one of the most impressive is a gilded coffin with the mummy of Kenamon.

Kenamon lived in the late 1500s BC, when he served as a seal-bearer, which is comparable to a modern-day finance minister, Onderka said.

The coffin arrived in Bratislava from Prague's Náprstek Museum of Asian, African and American Cultures.

"This is a Czech national cultural monument and this is the first time it has left the Czech Republic," Onderka said. "Even though we moved it within the Schengen zone, it had to undergo an in-depth check at the border."

"Fortunately, it did not need a passport," he joked, according to the SITA newswire.

The coffin was a gift from Egyptian King Muhammad Ali to Prince Metternich of Austria in 1828. At that time, such "small gifts" were a standard means for keeping good diplomatic relations.

The coffin and mummy are the most prominent representation of Egypt in the Czech and Slovak republics, the Pravda daily wrote.

As well as Kenamon, visitors can see the mummy of Hereret, an Egyptian woman. There is also a relief depicting Nefertiti, considered by many to be the most beautiful woman of Ancient Egypt, as well as original items from tombs of famous pharaohs.

The exhibition is a project by Pavel Onderka and Jana Mynářová, who premiered it in Prague last year. For the exhibition at the SNM, some Czech artefacts were replaced with ones from Slovak museums and the installation was changed.

Part of the museum space is styled like tombs, which creates the feeling of being in a labyrinth. Another part that presents the Valley of the Kings is unique. And the reconstruction of the exhibit's room of craftsmen that built the tombs of rulers thousands of years ago gives visitors an idea of how Ancient Egyptians lived.

What: Thebes, the City of Gods