THE LEADER of the Hungarian Coalition Party (SMK), Pál Csáky, denies that any deals lay behind his party's decision to switch sides and back the government in a crucial recent vote in parliament. The decision left the opposition's strategy to block the controversial new Press Code in tatters, and has led to recriminations between the SMK and its former opposition partners. In an interview with The Slovak Spectator, Csáky also suggests that the new Press Code's so-called right of reply, which has attracted international criticism, will not be widely used. 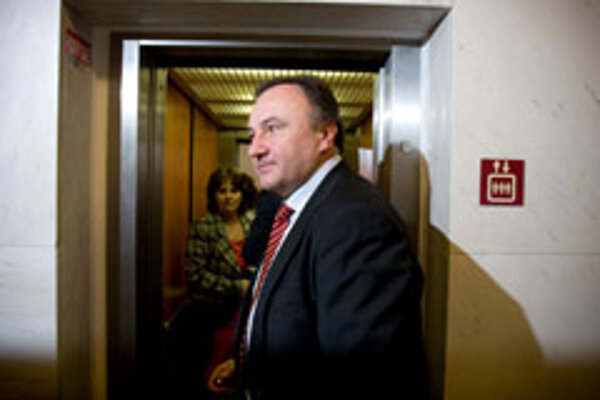 THE LEADER of the Hungarian Coalition Party (SMK), Pál Csáky, denies that any deals lay behind his party's decision to switch sides and back the government in a crucial recent vote in parliament. The decision left the opposition's strategy to block the controversial new Press Code in tatters, and has led to recriminations between the SMK and its former opposition partners. In an interview with The Slovak Spectator, Csáky also suggests that the new Press Code's so-called right of reply, which has attracted international criticism, will not be widely used.

The Slovak parliament ratified the European Union's Lisbon Treaty on April 10 thanks to the fact that, along with the parties which form the governing coalition, SMK MPs voted in favour. Without their support, the coalition would have had insufficient votes, since the Lisbon Treaty, as an international agreement, needed a three-fifths majority in parliament to pass. The governing coalition commands the votes of 85 deputies; five fewer than the 90 it required.

The vote caused uproar among opposition parties, which had previously agreed to make their support for the treaty conditional on changes to the Press Code. The Press Code was passed by parliament, without the opposition's changes, on April 9.

The Slovak Spectator (TSS) spoke to SMK chairman Pál Csáky, and asked him what made the SMK decide at the last minute to vote with the coalition to ratify the Lisbon Treaty?

Pál Csáky (PCS): That was not a last-minute decision. It was made in the first moments of a new situation.

TSS: By the new situation, you mean the approval of the Press Code?

TSS: But the Press Code was not approved in a form which the opposition parties had said would be acceptable.

PCS: But once it had been passed, we weren't going to look for arguments to continue blocking the Lisbon Treaty, with which we [SMK] agreed. We know that the Irish referendum is approaching, and that debates about the Lisbon Treaty in the parliaments of Euro-sceptic countries are coming up. Also, the deadline for evaluating Slovakia's application to join the euro is approaching. And we do want the euro, and don't want to cause complications on the European political stage by holding up approval of the Lisbon Treaty. We don't wish to be a bad example to anyone. That was the reason why we said - one day after the Press Code was approved - that we have no objections to it and that it made no sense to continue blocking it.

TSS: The Press Code must still be signed by the president. Theoretically, if the opposition had not voted for ratification of the Lisbon Treaty and stayed unified, this could have placed more pressure on the president not to sign a bill that your own party has described as undemocratic.

PCS: The SMK did most among all the parties to improve the Press Code, at home as well as abroad. It is not by chance that it was one of our MPs who filed the common opposition proposals in parliament. Our proposals were the best-prepared from a professional point of view; in addition, European experts took part in their preparation. After it was approved, although not in a good version, we saw no further reason to continue blocking the Lisbon Treaty. We did not want to traumatise Europe and Slovak society any longer over the Lisbon Treaty.

TSS: Do you think it would be ineffectual of the opposition parties, following approval of the 'bad' Press Code, to register their disapproval of what they regard as its undemocratic form by blocking the Lisbon Treaty?

TSS: All opposition parties have so far said that the Press Code was against basic democratic principles of press freedom.

PCS: I think that there is a crucial problem with the Act, but it cannot be proven now. And that is the right of reply, which is interpreted too widely. We shall see how much this right of reply will be used. I am sure that due to the big domestic debates which took place, and due to increased European attention, everyone will consider very carefully whether to use this right. And also when to use it. I do not think that the right to a reply could be abused to a mass extent; and if this were the case, it would be another argument to change this part of the Code.

TSS: So you are confident, after all, that you have acted in the right way? In spite of the current conflicts among the opposition parties?

PCS: I have no remorse about having saved the reputation of Slovakia and not causing further complications on the way to ratification of the Lisbon Treaty. Yes, we acted correctly. And in a statesmanlike way.

TSS: The chairman of the Social Democratic and Christian Union (SDKÚ), Mikuláš Dzurinda, says that there was a deal behind your vote to ratify the Lisbon Treaty alongside coalition MPs. He referred to "Hungarian copper," and is quoted as saying "The SMK leadership succumbed to the pressure of economic lobbyists. It does not take too much imagination to connect the economic background of Smer [the main governing party] with the economic background of Bugár [a former SMK chairman] and current SMK MPs."

PCS: I heard these statements. If Dzurinda has any evidence, he can bring it and put it on the table. If he has no evidence, then his behaviour is unworthy of a two-time former Prime Minister.

TSS: So you deny any such deals?

PCS: I deny them.

TSS: You were also accused of having made an agreement with Smer, to vote for the Lisbon Treaty in return for concessions concerning the new schools bill that is being prepared and will affect minorities' education.

PCS: That is not true. We - the SMK - have at least 15 reservations against the upcoming new bill on schools; but they do not concern just the question of minorities' education. We want to discuss them and if they are not changed, we will not vote to pass the bill. We think there are several things in which it amounts to a step back in the democratic conception of a modern education system.

TSS: So what do you perceive, how will the political scene in Slovakia develop after this move?

PCS: The opposition's co-operation will continue in our joint support for Iveta Radičová: the SMK will support her run for the presidency.

We will call on our opposition colleagues to co-operate in opposition. This is the only solution for the future. Of course, we will continue to behave as an opposition party in parliament.

TSS: And what about further development in connection the Press Code?

PCS: I think the Press Code will be a burden for the governing coalition of [Prime Minister] Robert Fico. Thanks to him, everyone in Europe has learned that in Slovakia, there are grave problems with the democratic deficit. Also, Robert Fico will face a more difficult situation on the international scene. We will be under more detailed scrutiny by our European partners.