No limits on space, but some on creativity

THE BOOM in the Slovak real estate market amounts to much more than just a series of property catalogues resembling Tolstoy's War and Peace. New buildings have been mushrooming at an amazing pace and it seems architectural plans are being ordered as often as pizzas. 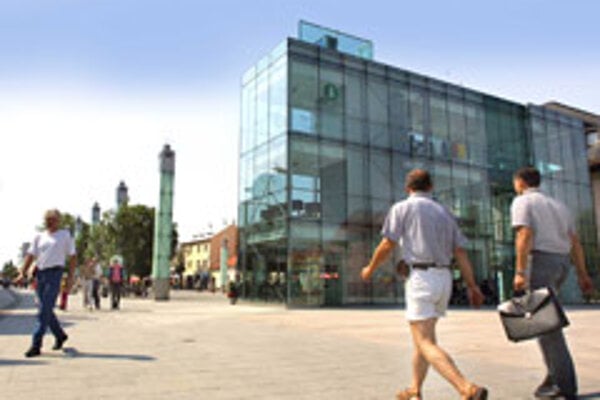 THE BOOM in the Slovak real estate market amounts to much more than just a series of property catalogues resembling Tolstoy's War and Peace. New buildings have been mushrooming at an amazing pace and it seems architectural plans are being ordered as often as pizzas.

But even though designers seem finally to have enough "square metres" to fulfil their visions, their hands are not always as free as they would like. Meeting customers' requirements and various technical standards is no less important or difficult than designing a creative project.

The modern developed economy is typically office-based. In Slovakia an ongoing lack of commercial property has led investors to erect office blocks at every opportunity.

However, they are often referred to as "those greyish glass buildings" and seldom stand out.

Professor Matúš Dulla, director of the Institute of History and Theory of Architecture at the Slovak University of Technology in Bratislava, explained why the blocks are so alike.

"The present trend is influenced by financial limitations, investors' needs, official regulations and many other factors," he told The Slovak Spectator. "Theoretically, architects have an ocean of possibilities, but practically, the majority of determining circumstances are beyond their control. This results in rather uniform solutions, which are tried and trusted."

Nevertheless, Dulla, who is also co-author of the book Architektúra Slovenska v 20. storočí (Slovak Architecture in the Twentieth Century), doesn't regard this architectural uniformity as a negative phenomenon.

"In the Middle Ages, Gothic edifices were also similar to one another and nobody found them boring then," he remarked. "It's simply a logical consequence of external or historical influences and nothing remarkable."

The professor also added that experiments are not always appropriate and should only be tried in moderation.

"There is no need to have an architectural masterpiece on every corner," he said. "Besides, a good featureless building is always better than an amazing sloppy work."

Local in origin, global in character

Architecture originating in small countries rarely has any distinctive features. According to experts, Slovakia is no exception, since its buildings have consistently reflected trends visible elsewhere across Europe.

"Our country is too small to produce completely authentic works," said Juraj Šujan, president of the Slovak Chamber of Architects. "Despite our admirably powerful economy, we cannot compare ourselves to Britain, France, Germany or the United States. Understandably, this situation has an impact both on architects and investors, the former having few opportunities, the latter lacking resources."

On the other hand, good architecture can emerge even in small countries, Šujan emphasised.

"Finnish, Austrian or Dutch architecture is really impressive," he told The Slovak Spectator. "Fortunately, at the top of our architectural scene we have recently reached these standards and can compete even with world-renowned studios."

According to Šujan, Slovak architecture has great potential, providing it addresses one important shortcoming.

"While larger projects are of a high standard, general standards remain rather imperfect," he observed. "The architectural studios, though they should not carry all the blame, should improve their approach in order that Slovakia does not lag behind other countries."

Michal Veselý, editor-in-chief of the online magazine Architecture.sk, agrees that architecture in Slovakia should be more progressive.

"In fact, there are not as many good works as one would expect given the number of new projects," he said. "In the neighbouring Czech Republic, ten times more prime-quality buildings appear every year than in Slovakia. Moreover, construction is disproportionately in the Bratislava region compared to the rest of the country."

However, Veselý underlined that this state of affairs is a significant improvement on previous years.

"Since the market is now more or less saturated, investors as well as normal people are become more demanding," he told The Slovak Spectator. "Consequently, projects cannot succeed unless they are of a high quality, which improves overall standards."

As far as architectural characteristics are concerned, it is hard to distinguish any specific features in Slovak architecture, Veselý said.

"Globalisation has entered this sphere as well," he remarked. "When looking at a picture of some modern building, one is hard-pressed to tell whether it comes from Vienna, Bratislava or Vilnius."

No need to recruit

To allow more fruitful discussion among Slovak architects, a number of competitions exist to provide opportunities for professionals to promote their work.

Probably the most reputable are the CE.ZA.AR Award and the Dušan Jurkovič Award, organised by the Slovak Chamber of Architects and the Slovak Architects' Association respectively.

"Such competitions reflect the boom in the Slovak architectural scene, which is now more challenging for our architects," Šujan said.

"A good architect should not be a luxury," he stated. "Thanks to a good designer, customers who are open to new ideas can discover unsuspected potential in their property."

Šujan said that he is also glad to see architects themselves are becoming more competitive and ambitious.

"Not so long ago, we literally had to recruit architects to take part in competitions," he said. "Now, authors submit their projects for competitions almost as a matter of course."