THE CONTROVERSIAL figure of Jozef Tiso, president of the wartime fascist Slovak state, has been honoured by a top representative of the Roman Catholic church in Slovakia. The Archbishop of Trnava, Ján Sokol, celebrated a requiem mass for Tiso on April 18, the 61st anniversary of his execution as a traitor. The Conference of Bishops of Slovakia said it was a private act by Archbishop Sokol. 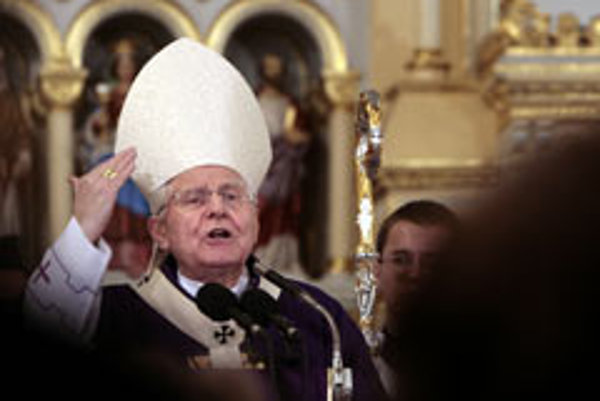 THE CONTROVERSIAL figure of Jozef Tiso, president of the wartime fascist Slovak state, has been honoured by a top representative of the Roman Catholic church in Slovakia. The Archbishop of Trnava, Ján Sokol, celebrated a requiem mass for Tiso on April 18, the 61st anniversary of his execution as a traitor. The Conference of Bishops of Slovakia said it was a private act by Archbishop Sokol.

The requiem mass took place in the Blumental Church in Bratislava, with Tiso's portrait hanging behind the altar. Next to the portrait, the presidential standard of the wartime Slovak state was placed with the slogan: 'Faithful to ourselves - concordantly advance!' The worshippers were predominantly elderly.

"For the redemption of the soul of our departed brother, priest, President Jozef Tiso," Sokol prayed. Historian Milan Ďurica, author of a flattering biography of Tiso, also spoke during the service. He praised Tiso both as a priest and as a politician. He also expressed the conviction that Tiso could not have helped Slovakia's Jews, who were persecuted for their faith during his presidency, and some 70,000 of whom were deported to face death in German concentration camps. On the contrary, Ďurica said he believed that Tiso had saved many Jewish lives.

In front of the church, two young men handed out leaflets praising Tiso.

The spokesman of the Conference of Bishops of Slovakia, Jozef Kováčik, told The Slovak Spectator that he learned about the requiem mass from the media, adding: "It was not an event organised by the Convention."

Kováčik further stressed that the Roman Catholic church routinely celebrates holy masses for the deceased, especially in the case of priests: "It is natural that such holy masses are celebrated. The question of why [this one] was celebrated by Archbishop Ján Sokol can only be answered by him," Kováčik told The Slovak Spectator.

The Jewish community has reacted negatively to the whole issue. "We have expressed several times amazement and pity that representatives of the Catholic church do not treat politicians of the [wartime] Slovak state as convicted criminals, but rather as people who deserve acknowledgement," the spokesman for the Jewish religious community, Jaroslav Franek, told the daily Sme on April 19.

In his comments to Sme, Franek added that last summer they asked the Pope's nuncio in Slovakia to address Slovak priests on the issue. According to Franek, the nuncio claimed that the Vatican condemned fascism and that it would try to influence its priests. "But the real effect is another thing," Franek added.

As for the personality of Tiso, Kováčik told The Slovak Spectator that the Convention of Bishops of Slovakia regarded him, in the first instance, as a priest. Kováčik thinks that historians will have to assess his historical importance as President. "It is generally known that this personality has still not been fully evaluated from an historical point of view. And we simply cannot blame him for everything, when others also bore responsibility," Kováčik explained. "It would probably be very irresponsible to definitely close the historical debate on this personality," Kováčik concluded.

Unlike Kováčik, Franek is convinced that Tiso represented a fascist state and, as president, he bore full responsibility for the status quo in the state. He said that glorifying Tiso could even be classified as a crime, by promoting fascism. Katarína Zavacká, lawyer for the Institute of Law and State of the Slovak Academy of Sciences, is of the same opinion.

She stressed that Tiso's personality is sufficiently understood thanks to archive documents, which are abundant. Moreover, documents from the Nuremberg Trials imply that the wartime Slovak state was regarded as a satellite of Nazi Germany during the trials, and that full responsibility for this status fell on Jozef Tiso.

"Tiso was cited as president of a fascist state in the Nuremberg documents," Zavacká said.
She also pointed out that as a result of the Nuremberg trials, not only fascist German military and para-military units - like the Nazi Party and Hitler Youth - but also fascist groups in Slovakia - such as the HSĽS (Hlinka Slovak People's Party), Hlinkova garda (Hlinka Guard) and Hlinkova mládež (Hlinka Youth) - were banned.

The Nuremberg trial was an international tribunal convened to try suspects alleged to have committed war crimes during the Second World War. It was founded by the so-called London Charter governing the prosecution of war criminals, which was agreed between the United States, Great Britain, the Soviet Union and France on August 8, 1945.

Zavacká stressed that during the Nuremberg trials, it was also agreed that states would incorporate promotion of fascism as a crime into their Penal Codes. Zavacká said that she thought the requiem mass for Tiso could be considered promotion of fascism.

"Tiso was a representative of fascism in Slovakia. He cannot be separated from fascism," she explained.

Archbishop Sokol has not hidden his admiration for Tiso. On December 27, 2006, he told the TV news channel TA3 that the wartime Slovak state had brought benefits: "I respect President Tiso, I respect him very much, as I remember when I was a child we were very poor, but during his times we had a high standard," he said, adding that: "I even have evidence... There was prosperity here. We did not want for anything, although it was wartime."

In protest at the glorification of Tiso by religious officials, on April 20 a civic initiative was formed called We Do Not Want To Stand By. Signatories of the initiative reject the open and repeated public statements and standpoints of Archbishop Sokol apologising for the regime of the wartime Slovak state, or the direct and indirect support of extremist groups. According to Miroslav Kocúr, the author of the initiative, who is a retired Roman Catholic priest, the ambiguous evaluation of Tiso is wrong.

"Historians, politicians or religious representatives in positions of responsibility who do not take a clear stand on this issue make it possible for people with minimal information and romantic ideals to maintain the opinion that the things that happened here during the wartime Slovak state were right," Kocúr told the SITA newswire on April 21.

The initiative was supported by well-known personalities like Anton Srholec, chairman of the Convention of Political Prisoners of Slovakia, or Peter Breiner, the New York-based composer and conductor.

However, Ján Sokol is not the only senior Catholic representative to publicly show approval of Tiso. In summer 1990, Bishop (now Cardinal) Ján Chryzostom Korec formally unveiled Jozef Tiso's memorial board on the secondary grammar school in Tiso's birthplace, Bánovce nad Bebravou. Later, a statement was issued claiming it was a private initiative of Korec. On April 18, 1997, at the 50th anniversary of Tiso's execution, Korec celebrated a requiem mass for Tiso in Nitra. On April 22, 2007, Korec said on TA3: "As for President Jozef Tiso, I would say he foiled, and wanted to foil, many bad things."

As early as the beginning of the 1940s, Tiso openly stated his intention to act against Jews in Slovakia. In his Holíč speech from 1942 on Slovak policy towards Jews, he said: "...we did so in accordance with God's order: Slovak, go and get rid of your pesterer!"

As president, Tiso was directly responsible for the deportation of 58,000 Jews, and of another 30,000 people the fascist state regarded as suspect, to concentration camps. Only a few hundred ever returned.

Recently, the results of DNA tests on what are believed to be Tiso's remains were published. More than a year ago the Andrej Hlinka Society allowed the remains - from a grave in the Martin Cemetery in Bratislava - to be exhumed to confirm that they belong to Tiso. Stanislav Májek, the chairman of the Andrej Hlinka Society, announced this month that the DNA test confirms the remains are those of Tiso. "Comparison of the president's DNA and that of his nephew, Śtefan Tiso, confirmed a blood relation, and the authenticity of the exhumed remains," Májek said. The test results have not been independently verified.