ARCHAEOLOGISTS in Nitra have made a unique find. During research in the grounds of the specialised hospital of St. Svorad-on-the-Zobor in mid-April, they found a piece of decorated Romanesque stonework dating from the 11th or 12th century, the SITA newswire wrote. 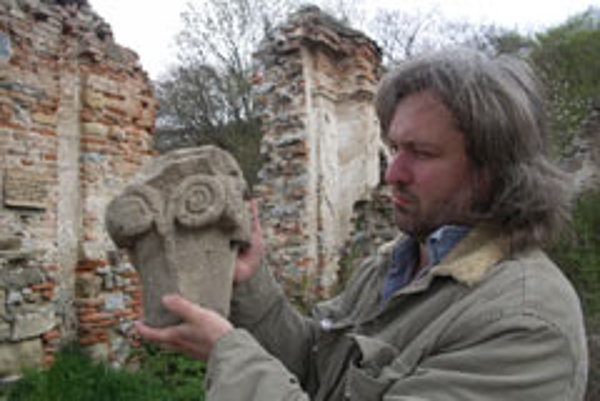 Where did the rest go?: All that remains of Slovakia's oldest monastery. (Source: SITA)
Font size:A-|A+

ARCHAEOLOGISTS in Nitra have made a unique find. During research in the grounds of the specialised hospital of St. Svorad-on-the-Zobor in mid-April, they found a piece of decorated Romanesque stonework dating from the 11th or 12th century, the SITA newswire wrote.

The capital comes from the Benedictine monastery of St. Hypolite which was probably founded as early as the 9th century, making it the oldest known monastery in Slovakia.

"This is the first discovery of an architectural link with the St. Hypolite monastery; until now, nothing like this had been found in this locality," Marián Samuel, head of research at the Archaeological Institute of the Slovak Academy of Sciences in Nitra, told the SITA newswire. "It is the first find of its kind; so far we have found just a few sections of masonry used in foundations."

Archaeologists also discovered a foundation furrow dating from the 11th to 12th century, which is probably the remains of a wooden construction.

Samuel notes that so far, no proper attention has been paid to the monastery, which is part of the nation's cultural heritage. Its ruins have been disintegrating over the years.

"Such an important location needs systematic archaeological research. But at the moment, we mostly do research only in places where something has been destroyed by construction," he says.

However, this situation could change. The town of Nitra has publicly declared its interest in making the monument accessible to the public. The project to make it accessible would be preceded by exploratory research, during which archaeologists would inspect the monastery over the course of two research seasons, with costs for one research season calculated at Sk500,000.

"For the sake of presentation, the examination of at least one of the monks' homes of the newer Camaldule monasteries, dating from the Baroque period, which has been preserved best, must be completed," Samuel said. Currently, the area is covered with clay. It needs to be uncovered and examined, including the basement area, which might result in interesting finds, according to Samuel.

Evidence for the existence of the Monastery of St. Hypolite is provided by several written sources, the oldest remaining being the Zobor Documents dating from 1111 and 1113 AD. It was founded by Benedictine monks, probably by the 9th century. It was heavily damaged in the Hussite wars, and stopped functioning at the end of the 15th century, during the reign of King Matthias Corvinus, or Matej Korvín. At the end of the 17th century Nitra Bishop Blažej Jaklin built a new monastery for the order of Camaldules on the site of the original medieval Benedictine monastery.