Children of the wind tell their story

EVEN a country as small as Slovakia can embrace several cultural identities, which form an interesting mosaic of different views on the same history. 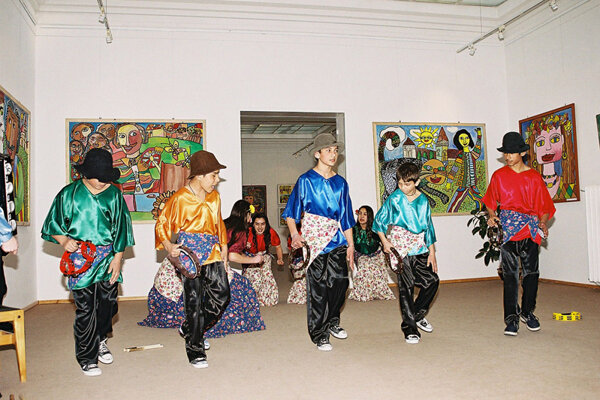 EVEN a country as small as Slovakia can embrace several cultural identities, which form an interesting mosaic of different views on the same history.

A good example is the Roma minority, whose art and heritage offers an original perspective on Slovak society.

According to unofficial surveys, the Roma are the second largest minority in Slovakia, with more than 350,000 people, although only a quarter of those identify themselves as Roma in official censuses.

Roma are known to be proud of their lore and, given recent cultural events that have taken place in the country, they obviously have good reason.

To support and map the activities of Slovak Roma, the Roma Culture Documentation Centre was founded in 2001 as a part of the Slovak National Museum in Martin. Three years later, the centre was transformed into a museum that aims to promote Roma culture on a wider scale.

"The Museum of Roma Culture in Slovakia (MKR) performs various activities, thanks to which it hopefully helps to improve the status of the Roma population in the country," Adriana Daneková from the MKR told The Slovak Spectator. "We carry out important surveys, look for new exhibits, but also organise educational and methodological training courses."

Since the museum has only existed for a few years, its collection is still very sparse.

Nevertheless, the museum staff have been trying to expand the number of exhibits in numerous ways.
"The collection should be developed systematically and both the physical and spiritual heritage of the Roma should be mapped as a coherent whole," said Daneková. "New exhibits are most often purchased, but we have also received some donations. Moreover, we keep a register of Roma artists and craftsmen. As soon as we find out about any interesting person, we get in contact with them and discuss possible forms of cooperation."

To fill in gaps in the collection, the MRK also borrows some exhibits from the Slovak National Museum, its parent organisation.

This is the case with the most recent touring exhibition called Children of the Wind and Their Story. Until mid-July, visitors can admire Roma art and folklore products at the Museum of the Slovak Village in Jahodnícke Háje, which is one of the exhibition premises of the Slovak National Museum in Martin.

"The exhibition has two parts," Daneková noted. "The first being of a more informational character, there are several boards with a lot of pictures and photos accompanied by texts in Slovak, English and Roma. Knowing that our visitors would hardly like to read too long materials, we tried to limit their length in order to make them attractive and accessible."

The second part is more visual.

"Dozens of collected exhibits offer a compact and illustrative view of the Roma and their cultural heritage," said Daneková. "Several visitors have expressed their surprise at the beauty of Roma folk products."

The most plentiful collection comes from ancient Roma blacksmiths, which contains anvils, horseshoes, forged hinges, hoes, axes, knives and chains. In addition, a considerable amount of products by Roma basket weavers, brick makers and jewellery makers can be found at the exhibition as well.

According to Daneková, similar events are the best way to fight intolerance and prejudice towards the Roma population.

"This exhibition provides a great volume of objective and unbiased information that improves the general attitude toward the Roma minority in Slovakia," she told The Slovak Spectator. "Both Roma and non-Roma who visit the exhibition learn something new about Slovak society, which enables them to view the whole situation with more perspective."

Daneková emphasised that familiarity with other cultures is the most important factor when trying to reduce xenophobia and racism.

"Many non-Roma who come to our museum refuse at first to visit exhibitions that present the Roma community," she said. "But then, after glancing at a few exhibits, they become more and more captivated by their charm and I often hear them whisper: 'Interesting, I didn't know that.' These words tell their own story."