THE SAGA surrounding a proposed new waste storage site in the town of Pezinok, near Bratislava, continues to take a series of ever-more complicated twists and turns. Pezinok inhabitants have been protesting vigorously against its proposed construction, arguing that the dump is being built in spite of a ban on it by the Slovak Environmental Inspectorate (SIZK). 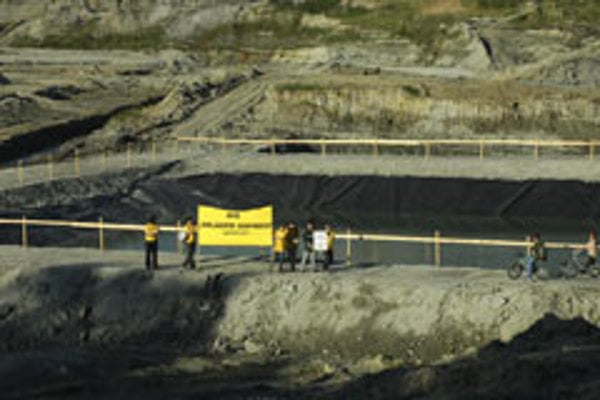 THE SAGA surrounding a proposed new waste storage site in the town of Pezinok, near Bratislava, continues to take a series of ever-more complicated twists and turns. Pezinok inhabitants have been protesting vigorously against its proposed construction, arguing that the dump is being built in spite of a ban on it by the Slovak Environmental Inspectorate (SIZK).

On Friday May 9, around five hundred Pezinok residents took part in a protest march against the decision to build the dump only a few hundred metres from the town’s historical centre. Carrying banners, they walked from the main square, past the Pezinok brickworks, to the area of Nová jama (‘New Pit’ of the brickworks), the proposed site of the dump. “We wanted to see what was happening there,” Oliver Solga, the Mayor of Pezinok, told The Slovak Spectator.

On April 25 and 29, municipal employees had noticed, and photographed, heavy machinery in the locality of Nová jama.

“We found that as well as lorries, there were actually also steamrollers, excavators, and other construction machinery. Plastic lining was being placed at the bottom of one reservoir,” Solga said.
He also told The Slovak Spectator that, according to the municipal employees, the work at the reservoir and the arrangement of the area near the reservoir exactly conformed to the plans filed as part of the application process for the dump’s construction.

“So we deduced that, in all likelihood, construction of the dump had already started,” Solga stressed.

Concern over whether construction of the dump has begun or not led to several criminal actions being filed. Zuzana Čaputová, who represents NGOs and other activists campaigning against the dump, filed a criminal action protesting defiance of an official decree.

Businessman Ján Man, the official representative of the Pezinok brickworks, and the man behind the plans to build the dump, filed a counter-action against Mayor Solga and Zuzana Čaputová claiming they were spreading alarmist rumours by alleging construction had started.

The disputes over the dump have already made it to sessions of a parliamentary committee and the cabinet.

At present, construction of the dump in Pezinok is blocked by a ruling of the Slovak Environmental Inspectorate (SIZK) dating from March 4. The SIZP ruling obliges the new operator of the dump, Westminster Brothers, Inc., which had replaced original dump operator Ekologická Skládka (Ecological Dump), “to restrain from any construction works related to the construction of Pezinok Waste Dump.”

The judgement superseded an earlier ruling by the local Bratislava Environmental Inspectorate (IZP), which stated that the appeal of activists against the dump should not postpone its construction.

After strong protests that the dump was being built nonetheless, the IZP stated that it was not. It said that machinery at the site was mining raw material for the Pezinok brickworks.

But according to Pezinok locals this is untrue. They insist that the waste dump is being built. “The ground works being carried out there can really hardly be considered to have anything in common with the mining of clay for the production of bricks,” Solga stressed to The Slovak Spectator.

“What is surprising is the statement by a public body that nothing was in fact happening there, that it was only a clay mine,” Solga added.

Peter Višváder, the Environment Ministry’s spokesman, confirmed to The Slovak Spectator that the Ministry had assessed the technical draft and plan for the dump from the point of view of its compliance with the regulations on waste disposal.

“From a technical point of view, the dump fulfils criteria taken into account when choosing the locality for a waste dump,” Višváder stressed.

During the dispute concerning the dump, suspicions of a conflict of interest during its approval arose. The licence for construction of the dump was originally issued by the Regional Construction Office, headed by an appointee of the governing coalition Smer party, Ján Man Jr. He is also owner of the land proposed as the site for the dump. His father applied for approval of the project with the authorities. Man Sr’s company, Ekologická Skládka, later gave up the project and transferred it to a previously-unknown company, Westminster Brothers, Inc., which is registered in the American state of Delaware, a notorious tax haven.

More recently, the argument has led to bad feelings between Pezinok and other communities in the Bratislava Region to which it belongs. Members of the Association of the Towns and Villages of the Lower-Carpathian Region, where Pezinok is situated, arrived at a common position in which they backed construction of the disputed dump on April 24.

“Paradoxically, they met without having invited me as the mayor of the district town concerned,” Solga complained to The Slovak Spectator. “They simply heard the point of view of representatives of the Pezinok brickworks, the investor and environmental bodies, and it seems they decided about us without us being there.”

Solga added that he did not understand why the situation has arisen. He said that for several years, Pezinok’s waste was taken to another dump close to the town. The town endured the dump’s proximity for years, but it was closed in November 2007 and Pezinok breathed a sigh of relief. It now objects to the construction of a new dump near the centre. The district’s waste is currently taken to the community of Dubová, where a normally-regulated dump is located.

“Dubová, where the community has 60 percent of shares, even won the tender and signed with us [the town of Pezinok] a long-term contract to act as the dump operator,” Solga told The Slovak Spectator.
Solga stressed that since the protest march work has continued at the new dump site. “In my mail, I received a message that on May 12 the machinery was still operating, and that another plastic lining was laid.”

“Tell me, why would a plastic lining be put down during the normal mining of brickwork clay?” Solga asked.

He added that he had just sent a letter, enclosing pictures, to Prime Minister Robert Fico, briefing him on the course of construction of the dump. “So that he can see that in the pit, the dump is probably being built.”

“I say probably, as I will be very pleased if someone competent confirms to me that the dump is NOT being built, and that this is really only a mine,” Solga added. Along with activists, ordinary Pezinok residents have also been protesting against the dump. Anton Eliáš told The Slovak Spectator that the people of Pezinok had had enough bad experiences with the old waste dump, which was also located close to the town. They sometimes smelt the stink from it, depending on the wind. “Such a waste pit is not appropriate so close to the town,” Eliáš said. “The old waste pit was filled, luckily, and closed. And should a new one be opened now, with even more unpleasant consequences, of course no-one in Pezinok would be pleased,” Eliáš added.