THE SLOVAK parliament has been racked by allegations of deceit over falsified signatures used by a coalition party leader to qualify for tax-payer funded pay and allowances. Despite early resistance from the speaker, parliament has now instructed him to report on the affair. 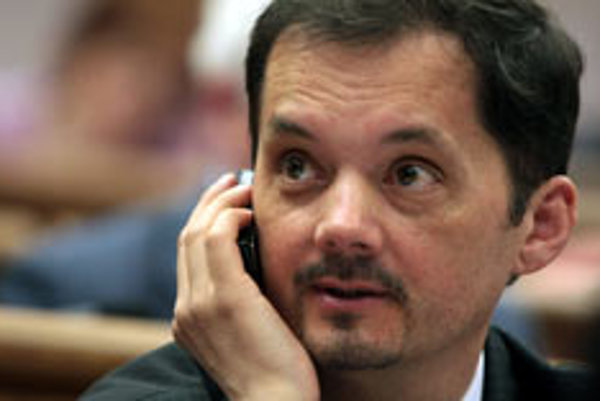 THE SLOVAK parliament has been racked by allegations of deceit over falsified signatures used by a coalition party leader to qualify for tax-payer funded pay and allowances. Despite early resistance from the speaker, parliament has now instructed him to report on the affair.

Earlier this month, a reporter for the Sme daily, together with a cameraman for the Sme.sk website, recorded Rafael Rafaj, an MP for the Slovak National Party (SNS), repeatedly forging the signature of his party's leader, Ján Slota, on the attendance list in parliament. Slota was not present in parliament at the time.

The Sme reporter found that during the first three days of the parliamentary session, which began on May 13, Slota was present on only one. On Tuesday, May 13, he took part in the parliamentary session for just half an hour - in order to vote - after which he left. On Wednesday and Thursday he was not present, but his signature still appeared twice each day on the attendance list.

Immediately after Rafaj had been recorded forging Slota's signature, the Sme reporter approached the SNS MP to ask him why he had done so. Rafaj refused to answer. As The Slovak Spectator went to press, Slota was also refusing to comment on the case.

The Speaker of Parliament, Pavol Paška, refused to censure either of the SNS MPs. Paška is an MP for the Smer party, which governs in coalition with the SNS. "Mr. Slota, when asked whether he signed the attendance list, and whether he was present in the parliament, answered 'Yes'," Paška told journalists on May 20.

"I am not a judge, nor is the National Council [i.e. Parliament] a court," Paška added. When asked if the responses of Slota and Rafaj were enough for him he concluded: "The case is finished," adding that he thought the whole affair was generated by the media.

Paška also refused to allow the publication of footage from the cameras which monitor parliament, or the original attendance lists, either of which would prove whether Slota was present on the days in question. Instead, he told journalists that the opposition were to blame for misusing the situation, which he said he regretted.

"I am not an investigation committee, I am the speaker, who can - and should - act according to the frameworks and limits defined by the constitution and by parliamentary law," Paška told journalists.

"No provision dictates what I should make available. Mr. Slota told me that he signed the list," Paška added.

Also present at the meeting at which Slota and Rafaj explained how Mr Slota's signature came to appear on the attendance lists was Interior Minister Robert Kaliňák (Smer). Paška refused to explain why the interior minister was involved in the meeting.

"Mr. Kaliňák is vice-chairman of the government, and party vice-chairman, just like me. If you allow, I will meet my friends and party colleagues when I will, and not when you will," Paška told journalists.

PM: not our problem

The prime minister, and leader of the Smer party, Robert Fico, sought to distance himself from his coalition partner, describing the forgery as not a problem for the coalition, or Smer deputies.
"We have no problem. Ján Slota has a problem, not us. This is a problem of a specific politician, a specific party," Fico said.

Fico also added that it was not within his competence as prime minister to solve such problems.
"This is an internal issue of the National Council. We must let the National Council solve this," Fico explained. "And voters, if this is true - something which I can't yet determine - voters will let every single politician have it," Fico added.

He further said that he had no time to deal with what went on in other parties. "We have no ambition to evaluate other parties," he said.

The Prime Minister nevertheless went on to evaluate the opposition, whose members he attacked for being what he called 'hateful and angry'. "We were not bad," he said, referring to his own party's record in opposition. He called on the opposition to be tough, but correct.

The prime minister's party colleague and vice-speaker of parliament, Miroslav Číž, played down Slota's absence from parliament, claiming it was already a well-known fact.

"His voters already know that Slota does not go to parliament. He has not attended it for a very long time; it's a situation that has been going on for years," Číž told Sme on May 19.

According to Mikuláš Dzurinda, the former prime minister and current leader of the opposition Slovak Democratic and Christian Union (SDKÚ), inference should be drawn from the behaviour of the governing coalition's SNS MPs.

"We consider the behaviour not only of the SNS deputies, but also the way in which the speaker of parliament and prime minister have reacted, to be incompatible with the values of democracy and the rules of parliamentary democracy," Dzurinda told journalists.

"The speaker of parliament has again put his head in the sand and is trying to prevaricate," Stanislav Janiš, chairman of the SDKÚ caucus, added at the press conference.

On May 21 the opposition succeeded in passing a proposal for Speaker Paška to look into the Rafaj-Slota signature affair and report back to a full session of parliament. The proposal was filed by Mária Sabolová, an MP for the Christian Democratic Movement (KDH), in the name of all three opposition parties: the KDH, SDKÚ and the Hungarian Coalition Party (SMK). As well as opposition support, her proposal was backed by a majority of MPs from the governing coalition's other junior member, the Movement for a Democratic Slovakia (HZDS), as well as most Smer deputies. In an apparent volte-face, the proposal was even supported by Speaker Paška.

Meanwhile, the police now say they will not investigate Rafaj for having falsified Slota's signature, despite originally having said that they would.

The head of the police anti-corruption unit, Tibor Gašpar, had told the ČTK newswire on the morning of May 19: "We will certainly deal with it. The possible criminal dimension has to be taken into consideration," Gašpar told the ČTK.

The General Prosecutor's Office, which decides on police investigations, subsequently declined to launch a probe.

"The Prosecutor's Office will not deal with this issue, as it not obliged to do so by any law, nor is it authorised to do so," said Svetlana Husárová, spokesperson for the office, as quoted by the SITA newswire.

A resigning matter 'in any other European country'

Lawyer Radoslav Procházka told The Slovak Spectator that top politicians are judged according to different measures compared to ordinary citizens where possible legal violations are concerned. "As in numerous other cases, so it is here: the greater risk of damage to probity in the execution of public power comes not so much through the case itself, as through the actions that follow," Procházka explained.

"The way that dozens of other people reacted to the misdeeds of these two MPs quite unambiguously shows that in Slovakia the amount of responsibility a public official assumes for their faults is in inverse proportion to the seniority of their position," Procházka told The Slovak Spectator.
Procházka considers a "clean solution" - not just as a lawyer, but more so as citizen - an investigation by the Prosecutor's Office into whether the crime of falsification had been committed. "And if the appropriate parliamentary committee dealt with both the direct and indirect evidence and tried to take a legally binding standpoint on this issue," he said.

According to Procházka, in any other European country, MPs recorded on video signing an attendance list for someone else would give up their parliamentary mandate within 24 hours of the recording being published.

Commenting on the case, lawyer Ernest Valko told The Slovak Spectator that elected MPs must swear an oath before taking up their mandate: "The deputy's pledge says, among other things, that he or she will respect the constitution and other laws. Among other things," Valko stressed.

He stressed at the same time that if a criminal prosecution of both MPs was launched, they would be protected by the legal immunity enjoyed by deputies. Parliament would therefore have to decide if the prosecution were actually to proceed. "Which is very unlikely, due to the balance of power in parliament," Valko added.

According to Grigorij Mesežnikov, head of the non-governmental think-tank the Institute for Public Affairs (IVO), this was a clear case of falsification. "And it shows how far behaviour in parliament has declined on the part of the governing coalition," Mesežnikov told The Slovak Spectator.

"The people in charge refuse to acknowledge something that has been confirmed in a very obvious way, to the point of there being video evidence," Mesežnikov said.

The ruling coalition, especially the Smer party, which considers the SNS a crucial partner from the point of view of meeting its own ambitions for power, simply won't go so far as to pressure the SNS with consequences, Mesežnikov added.

"This discredits the work of parliament. It is an evident lie, which decreases the trustworthiness of the whole parliament, and also the political parties which are represented in it," Mesežnikov said.

In Slovakia, a double standard towards the law is thus created: one law for ordinary citizens, and another, much more lenient, for the political establishment, he said.

"As soon as such habits become established and a normal part [of political life], then public cynicism will deepen, as will the distrust of citizens towards political parties, politics, and finally towards the democratic system," Mesežnikov stressed to The Slovak Spectator.

Pavol Paška, the current speaker of parliament, has not cut the pay of any MP due to their absence, even though he is authorised to do so according to the law governing parliament.

"There was no reason for the speaker of parliament to cut any MP's remuneration due to an absence," Jozef Plško, Paška's spokesman, told the Hospodárske Noviny financial daily on May 20.

However, Plško did concede, in comments to the private TV channel, Markíza, that if an MP is absent without proper reason from parliamentary sessions for more than two days in one month then, according to parliamentary law, the speaker of parliament can cut his or her pay and allowances by half.

In total, Ján Slota has been absent from almost two thirds of votes in parliament, according to calculations by Hospodárske Noviny. He has refused to comment on these absences. The MPs' full remuneration amounts to Sk108,900 per month.

The only MP to have lost all their MP's remuneration was HZDS leader Vladimír Mečiar when he ran for president in 2004; he was fined for unexcused absences by the-then speaker of parliament, Pavol Hrušovský.