Pezinok dump is being built

AFTER three inspections, the Bratislava Environmental Inspectorate (IŽP) has confirmed what many in Pezinok have known for weeks: that an illegal waste dump is being built in the town. 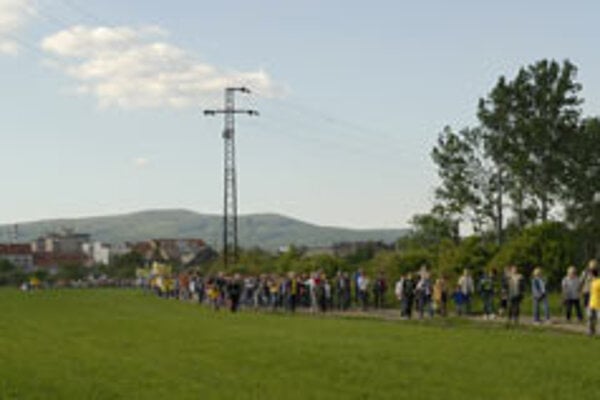 AFTER three inspections, the Bratislava Environmental Inspectorate (IŽP) has confirmed what many in Pezinok have known for weeks: that an illegal waste dump is being built in the town.

The Inspectorate had previously held that the site was being used for clay mining, so it took no action to put a stop to it.

But at a hearing before the parliamentary Committee on Agriculture, the Environment and Protection of Nature on May 21, the Inspectorate declared that it was now completely convinced that the site was in fact a waste dump it had banned several months ago.

The Inspectorate called on the dump's constructor, Westminster Brothers, Inc., to "immediately halt construction" and stated it was drawing up plans to impose a fine of up to Sk5 million.

"At last, the Inspectorate acknowledged the construction there," he said. "We have known this since April 24."

And Jaroslav Pavlovič of the A Waste Dump Does Not Belong in a Town civic initiative was similarly jubilant.

"The Inspectorate finally confirmed our complaints over the past several weeks about the illegal construction site and the dump being built there," he said.

Pavlovič has been saying since the end of April that the site was showing signs of construction required for a dump, such as an accumulation tank, a rolled surface, and levelled slopes. Trees were also cut down at the site and an access road was built.

"These are all according to the dump's blueprint," Pavlovič said as early as May 9.

But as recently as a few weeks ago, Ján Man, Sr., the legal representative for Pezinok Brickworks, which sold the construction rights to Westminster Brothers in February, maintained that the site was being used to mine clay, and threatened to sue the initiative's lawyer, Zuzana Čaputová, and Mayor Solga for slander.

"The Inspectorate's finding has vindicated us," Pavlovič told The Slovak Spectator.

"The accusations against us will be have to retracted," Solga added.

Pavlovič informed The Slovak Spectator that as well as imposing a fine, the initiative will request that the Inspectorate order the illegal construction site removed, as the law allows.

And Čaputová told The Slovak Spectator that even Westminster Brothers was unaware that a dump was being built.

"Inspectorate documents revealed that construction at the site is being coordinated by an employee at Pezinok Brickworks," Čaputová said.

Jozef Dučák, legal representative for Westminster Brothers, told the Sme on May 20 that he had no information about the construction activity at the dump site.

Mayor Solga said this left it unclear which party would be responsible for paying the fine.

"Westminster Brothers pretends not to know about it and Pezinok Brickworks passed on the construction rights, so it no longer has anything to do with it," he told The Slovak Spectator. "So the police will have the find the perpetrator of this illegal construction."

Solga said he would also ask for the site to be closed.

"The public construction supervision will come, or our construction office will do it," he told The Slovak Spectator.

However, the Pezinok construction office answers to the Bratislava office, which is headed by Ján Man, Jr., a Smer party member who's is the son of Pezinok Brickworks' legal representative.

It was the Bratislava office that originally granted permission to the Pezinok Brickworks to begin construction several months ago. The Inspectorate eventually revoked that permission.

"It will be very interesting, as they will surely appeal, and the case will drag on," Solga told The Slovak Spectator.

Solga added that the town administration and activists will continue to monitor and photograph the dump site.

"If the equipment reappear there, we will inform the Inspectorate, media, and parliament," Solga vowed.