THE HUNGARIAN Prime Minister, Ferenc Gyurcsány, has put on hold a long-planned meeting with his Slovak counterpart, Robert Fico, following controversial statements made by Ján Slota, a fellow-party leader of Fico's in the governing coalition. Slota, chairman of the Slovak National Party (SNS), made his comments in reference to St Stephen, an important historical figure for Hungarians. The Slovak prime minister has made light of the comments. 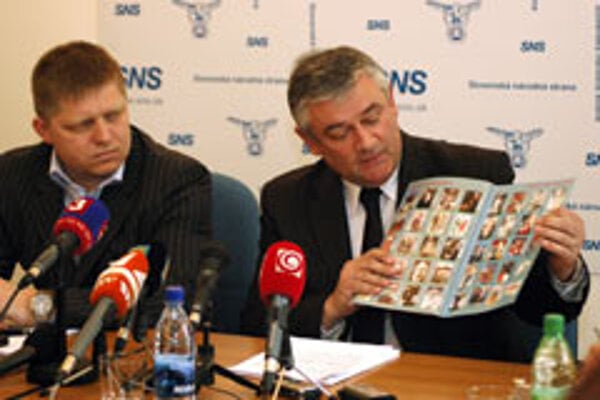 THE HUNGARIAN Prime Minister, Ferenc Gyurcsány, has put on hold a long-planned meeting with his Slovak counterpart, Robert Fico, following controversial statements made by Ján Slota, a fellow-party leader of Fico's in the governing coalition. Slota, chairman of the Slovak National Party (SNS), made his comments in reference to St Stephen, an important historical figure for Hungarians. The Slovak prime minister has made light of the comments.

While Slovak government officials said that Gyurcsány used Slota's statement only as a pretext for postponing the meeting, Slovak political analysts commented that the cancellation of the meeting is a response to both Fico's silence over Slota's statements and the presence of the SNS in the ruling coalition.

"Hungarian flags on the front, and here is some Hungarian clown on a horse in Budapest," Slota said, describing the cover of a history textbook, featuring a picture of St Stephen, used by the Hungarian community in Slovakia at a press conference on May 9.

Fico, sitting next to Slota, at the press conference, remained silent. St Stephen ruled Hungary between 1000 and 1037, during which time the Hungarian empire included Slovakia.

Fico also said that postponing the visit was evidence that the domestic political situation in Hungary required political parties there to attack the governing coalition in Slovakia.

"If he [Gyurcsány] went on an official visit we would have to speak about the future, and also about some embarrassing things, like Mlynky," Fico said, as reported by the Czech newswire ČTK on May 17. He was referring to a village in Hungary where the local Slovak minority have complained of discrimination against them.

Fico also said that he is ready to negotiate with the Hungarian prime minister any time, anywhere and on any issue that he considers important.

Kinga Göncz, Hungary's foreign affairs minister, who had objected to Slota's statements before the latest reference to St Stephen, said that Slovakia uses double standards in its statements.

"On the one hand, the government does not distance itself at all from Slota's statements while, on the other hand, there are various initiatives to prepare meetings and negotiations," Göncz told the Czech daily Hospodářské Noviny.

Dušan Čaplovič, the deputy prime minister, was the only minister in the Fico cabinet to criticise Slota's statements.

"I consider it in part an unfortunate statement, made at a bad moment," he told the private TV channel, Markíza, on May 17.

The Slovak ministry of foreign affairs said that there was no reason for the Hungarian side to postpone the meeting.

"With this decision, Hungary repeatedly refuses the offered hand and a factual dialogue about all issues concerning our relations, which we consider a demonstration of unwillingness to talk openly about problems like the erosion of the position of the Slovak minority in Hungary, or the extreme nationalism and racism of the Hungarian Guard," the official statement read.

The ministry of foreign affairs maintains that Slota's statement was merely a pretext for delaying the visit.

"[Foreign] Minister Ján Kubiš has never had any problem commenting on such statements by Mr Slota, when asked by journalists," foreign ministry spokesman Ján Škoda told The Slovak Spectator.

However, Škoda also said that the meeting had only been delayed, not cancelled, and that the Slovak side will continue to prepare for it.

However, Göncz does not think that the existence of the extremist Hungarian Guard, which is often compared to the fascist movements of the 1940s, was similar to having the nationalist SNS as part of Slovakia's government.

"There is a big difference," Göncz told Hospodářské Noviny. "Ján Slota is the head of one of the governing coalition parties, while the Hungarian Guard is not in the Hungarian government."

According to Göncz, while Gyurcsány's government sharply condemns the Guard, Slota is a member of the governing coalition "and sometimes, his statements exhort hatred, which is a crime according to European law."

Slovak political analyst László Őllős said that after Slota had attacked St Stephen, Gyurcsány simply could not afford to sit at the same table with Prime Minister Fico.

"For Gyurcsány, this meeting was risky even without this case," Őllős told The Slovak Spectator. "They could hardly have come to any conclusion acceptable to the Hungarian public. He had no way of explaining at home that he had sat at the same table with Fico, and smiled at him, while at the same time Fico tolerates Slota, both of them preparing laws to the disadvantage of [Slovakia's] Hungarian minority."

Štefan Markuš, a former ambassador of Slovakia to Hungary, said that Slovak-Hungarian relations are at their lowest ebb for a long time, and close to an all-time low.

"The need for the two prime ministers to meet has, quite simply, been an urgent issue for a long time," Markuš told The Slovak Spectator.

Markuš said that even he had been approached, as a former ambassador, to help with preparations for the meeting, which he said had been done very carefully.

"Had Fico at least said later that it had been an unfortunate expression, as Mr. Čaplovič did, and that it was not polite, it would have been OK," Markuš said. "Especially at a time when we were preparing a bilateral meeting, it cannot have contributed to the good of the whole thing."

According to Markuš, Fico instead focused on keeping the coalition in power, and as a result appeared to be protecting Slota.

Grigorij Mesežnikov, the head of the non-governmental Institute for Public Affairs, also said that Fico had had enough time to react to Slota's statement and condemn it.

"This case only completes the puzzle of the state of the governing coalition, in which one of the coalition partners, the SNS, not only complicates, but in fact worsens the international position of the country through its awkwardness," Mesežnikov told The Slovak Spectator.

After Fico came to power in 2006, Slovakia and Hungary exchanged several barbed messages.

Hungary's principal complaint about Slovakia concerns the SNS participation in government, given its leader's notorious anti-Hungarian sentiments. The Slovak government, for its part, has recently criticised the decision of the local government of Mlynky, in Hungary, to move local Slovaks out of municipal premises there, and the position of the Hungarian authorities towards the extremist Hungarian Guard.

Last year, Fico and Gyurcsány met in Bratislava; a year earlier, the Hungarian PM had refused a one-on-one meeting in Visegrád, saying that Fico had let extremists get too close to him.