BRATISLAVA Mayor Andrej Ďurkovský and Vienna Mayor Michael Häupl recently inaugurated the Twin City Liner 2, a lightweight catamaran that will add to trips between the capitals already made by the popular Twin City Liner boat. 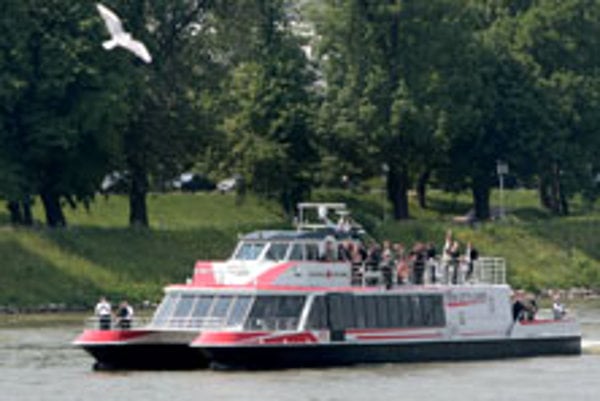 BRATISLAVA Mayor Andrej Ďurkovský and Vienna Mayor Michael Häupl recently inaugurated the Twin City Liner 2, a lightweight catamaran that will add to trips between the capitals already made by the popular Twin City Liner boat.

The inauguration was in celebration of the 2008 Twin City Vienna - Bratislava initiative.

This year, several joint activities will be signed between the capitals of Austria and Slovakia, Milan Vajda from the Bratislava City Council informed The Slovak Spectator in a press release.
"The Twin City Liner 2 will be used to reinforce morning and evening lines starting May 31, which up to now had to be booked in advance," said Oľga Kanioková, project manager of the Twin City Liner.
The catamaran, which cost €3 million, was built in the Batservice Mandal shipyard in Norway.

As well as a light construction and jet engine, the boat's new features are seats on the upper deck, night vision technology, additional radar, and a new colourful design. Also, the price of morning journeys from Bratislava and afternoon journeys from Vienna have been reduced.

The notable personalities on board for the ceremony included Austrian president Heinz Fischer and his Slovak counterpart Ivan Gašparovič, both accompanied by their wives.

Vienna and Bratislava are preparing several more joint projects, including a joint candidacy for acquiring the new European Institute of Innovation and Technology (EIT), a specialised European Union agency that would immensely improve the cities' reputation as a scientific-technological centre.

Several other important exchanges between the cities' inhabitants are being planned.

In mid June, a wine presentation will be organised in Bratislava as part of the famous Wine Gallery event, Viennese artists will perform at the 33rd Summer of Culture Festival in Bratislava, and Bratislava will be represented at the Donauinselfest in Vienna in September.

And during the week of September 22, both cities will exchange several dozen secondary school students on short stays.