IN AUGUST 1997, without any prior international experience, Pavol Juhás left Slovakia to do his PhD overseas, in the distant and (for him) unknown USA. Just a couple of months earlier he had graduated from Bratislava's Comenius University as a physicist and felt he needed to try out something new. 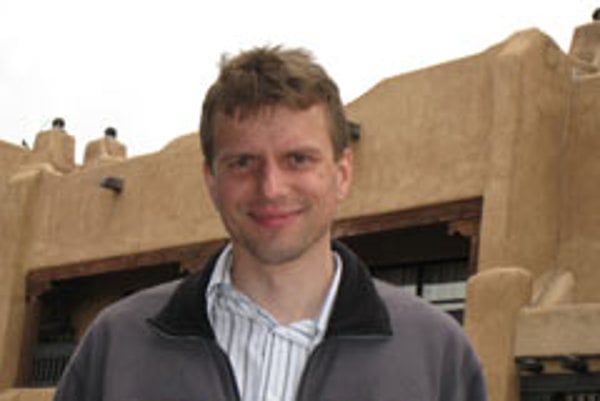 IN AUGUST 1997, without any prior international experience, Pavol Juhás left Slovakia to do his PhD overseas, in the distant and (for him) unknown USA. Just a couple of months earlier he had graduated from Bratislava's Comenius University as a physicist and felt he needed to try out something new.

Today, Juhás's permanent address is in the US, where he works as a research physicist for the Applied Physics and Applied Mathematics Department at Columbia University in New York.

"I am studying the atomic structure of materials, in other words how atoms are arranged inside a material," he explains, describing the focus of his research. "This helps materials scientists to understand each material and to develop new ones with better properties."

This might seem quite a change in comparison with the jobs that Juhás dreamt of as a child: first he wanted to be tennis professional, and later a guitar player.

"However, I wasn't exactly good at sport; nor did I display much talent for music, so the dream jobs never materialised," he said, smiling. When the time came for him to decide on his future career, he went for physics at MATFYZ (today's Faculty of Mathematics, Physics and Informatics) at Comenius University in Bratislava. At high school he didn't really enjoy learning by heart, which was one of the reasons he chose to study science. He realised that precise thinking was his forte: he found physics and maths his easiest classes at high school, since he only needed to understand things once before he could move on.

"I really liked maths, as we had a superb professor at high school, but I picked physics because it seemed to me somewhat closer to real life," Juhás says. He made the right choice, completing his studies as one of the five top students to be awarded the Dean's Award for Excellence in Study. Juhás decided he wanted to stay in academia and continue his research as a PhD student, but not at a Slovak university.

"Research is just much better funded and things work much more easily abroad," he says. He didn't have to wait long for an opportunity to study abroad. During work on his diploma project at the Institute of Electrical Engineering, Juhás met a friend who was already a graduate student at the University of Pennsylvania.

"We talked together, he said that it was a great place to be, so I applied, got accepted and indeed - he was spot on," Juhás says. He now believes he was really lucky, and if he were to do it again he says he would go for the safer option of conducting a more intensive search and applying to several universities. Nevertheless, he managed to get a research-stay scholarship from the university to cover his tuition and living costs.

"It is much easier to get full funding in science or engineering, where grad students are needed to toil in the lab," he says.

Juhás began as a PhD student in Materials Science and Technology at the University of Pennsylvania in 1997 and got to like his studies in the US so much that he later went to work as a post-doc at Michigan State University in East Lansing. That led him to his present job as a research physicist at Columbia University.

"Studying is much more intense in the US: pretty much the same amount of material is covered in four years instead of five, as back home," Juhás says. In the US, students are busy the whole semester, not only during the exam period, as they get plenty of assignments and papers to write.
However, Juhás stressed that his Slovak university education prepared him very well for study in the US; he says the best lectures at MATFYZ were comparable to lectures at the University of Pennsylvania. But he notes a huge difference in infrastructure: according to Juhás, libraries in the US have 'awesome' coverage and subscribe to every journal or research database one might need. He also lists research funding, lab equipment, ease of ordering materials, travel funds, effective support staff and 24/7 access to the lab - without any paperwork or need to argue with the doorman - among the advantages of studying in the US.

"Another striking difference is how former students stay attached to the university and how the university tries to keep in touch and encourage donations," Juhás says. He gives an example of the American football stadium at Michigan State, where alumni of all ages wearing MSU jackets can be seen on days when the university team plays at home - and who, if the team does well, are sure to feel good and likely to write a check, he adds.

"Perhaps a part of this alumni culture is the tax code, which allows deductions for university gifts, but well-to-do people in the US are certainly more likely to finance a building at their university bearing their name on a brass plaque, than a yacht or a football club," Juhás believes. "I feel such an alumni culture would take generations to build up [in Slovakia]."

However, there are other things apart from just the alumni culture that could change in Slovakia to bring our system closer to western standards. According to Juhás, there is a need to build good libraries, to establish a zero-tolerance approach towards any academic misconduct such as textbook plagiarism or corruption, to teach more classes in English and to hire qualified faculty staff from all over the world. He agrees that young researchers in Slovakia have a hard time succeeding and an even harder time making a decent living from science alone. For him, staying in the US is the only option at the moment, although he admits he misses many things, such as the castles, old cities and serene nature all close to each other; but also halušky, klobásky and Zlatý Bažant beer. When talking about his return to Slovakia, he says 'never say never', and describes himself as a man who's not much into making long-term plans.

"Well, a Nobel prize, what else?" Juhás answers with a smile when asked about his professional plans. "Seriously, a faculty position at a good university would be fine. I will soon start searching for one for next year."